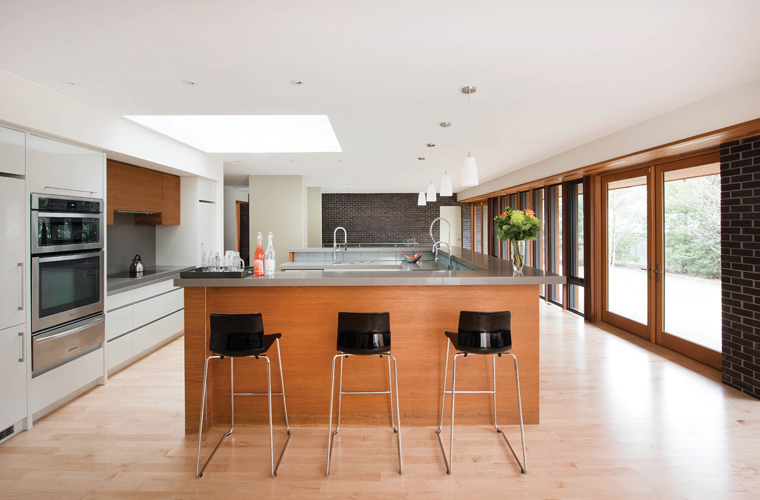 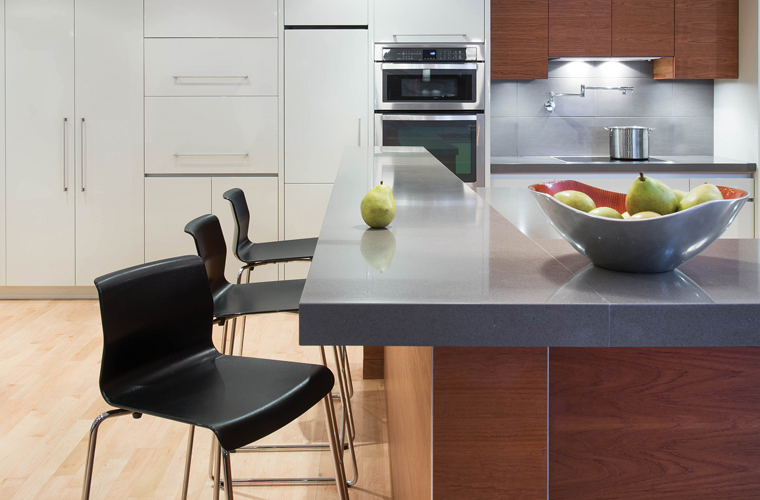 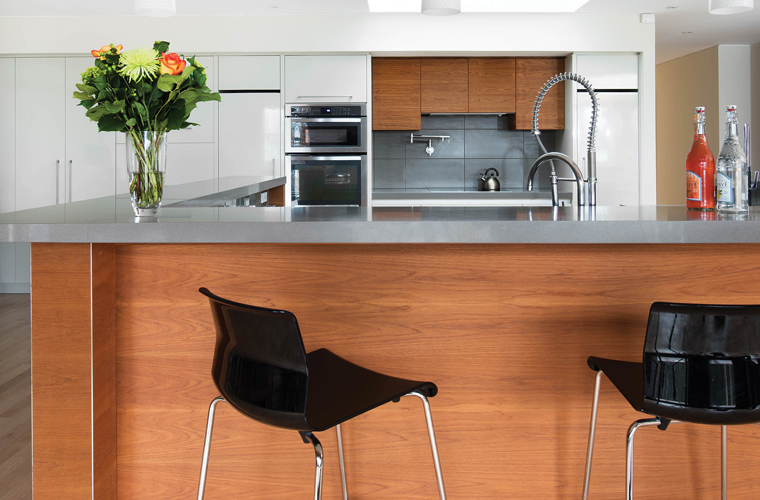 Sometimes it really is easier to start from scratch. George Urvari and Julie Poirier had originally wanted to expand and renovate their 1960s bungalow.

The more they described their ideal home, the more the architects at INCITE Design were convinced it would be simpler to raze the existing structure and begin anew rather than deal with the limitations of the existing layout and the building’s age.

“By starting over from the foundation upwards, we could rearrange the space to create the large kitchen that the homeowners wanted as the heart of their house and have it open up onto their backyard,” Jeffrey Veffer, INCITE Design’s co-founder/partner, explains.

George, the owner of Oriole Landscaping, wanted a kitchen ideally suited for his love of cooking and entertaining. “I had the idea for a central island with enough space to prep food, serve drinks and have everyone gathered around without being in each other’s way, and our architects took it from there.”

INCITE Design maximized the kitchen area by integrating the overlapping space of adjoining rooms instead of erecting corridors.

The custom cabinetry’s sleekness provides extensive storage and convenience. Even the coffeemaker and toaster remain out of sight until a cabinet handle is pulled and they pop out on their shelf.

“I don’t like wasting time looking for things,” George says. “It’s so great that everything in this kitchen has its designated place.”

Every aspect was designed with major partying in mind and to make the clean-ups as simple as possible. “My wife was against installing two dishwashers at first, but now we don’t know how we would do without them,” George says. “Same with the second fridge that holds all the drinks when we’re having a party and keeps the stews, casseroles and lasagnas I make for the family at other times.”
Two sinks, a composter and a pot-filling faucet over the cooktop are welcome conveniences. “I just love how the induction cooktop boils water for pasta in no time,” George says.

He says he cooks twice as much in his perfect kitchen as he used to – often spending five or six hours on a Saturday or Sunday preparing food as he enjoys the skylight’s brightness, the expansive view into his backyard and the adjacent golf course.

In the summer, the two sets of French doors can be opened to create a natural flow of people between the kitchen and elongated deck. “We had 110 people at our house-warming party with a singer playing guitar and no one was crammed into a corner anywhere,” George says. “It’s great to be able to have all of our friends and our children’s friends over.”

His kitchen is his epicurean castle.

* The custom-built island has two sinks and enough space to prepare food in one area and serve drinks in another. The warm teak panels can be lightly sanded and re-oiled if scuffed. A narrow strip protects the corner edges. The Mercier
rock maple flooring creates a highly durable base throughout the new home.

* INCITE Design maximized space and convenience with pop-up doors that produce a mini bar in one area and a coffeemaker and toaster at the ready on another usually hidden pullout shelf. All of the home’s countertops and shelves are custom-made of the same quartz as the central island’s surfaces.

* The homeowners adore the Blanco pot-filler and the AEG Appliances induction cooktop. A Bosch ventilation hood was built into the customized teak cabinetry to minimize its presence and maximize storage area. The cabinetry under the cooktop stores a lot of pots and pans.

* Oiled teak and rock maple flooring warm up a space otherwise dominated by modern sleekness. The couple wanted an understated look that would wear well over time.

* The four-by-four-foot Velux skylight appears much larger with its sculpted flair. A Vanee heat recovery ventilator (discreetly stored in the basement) captures the warm air that rises toward the skylight and uses it to warm fresh air entering the house. Daylight and even moonlight illuminate the kitchen’s main work area.

* A rock maple base was built into the teak central island to improve durability and seamlessly connect the major wood surfaces.
* A double set of French doors without central supports bring the outdoors inside on warm days, enabling a house full of guests to circulate comfortably. The black diamond velour Belden bricks tie the inside of the house to its exterior – a must for a homeowner whose livelihood is landscaping.