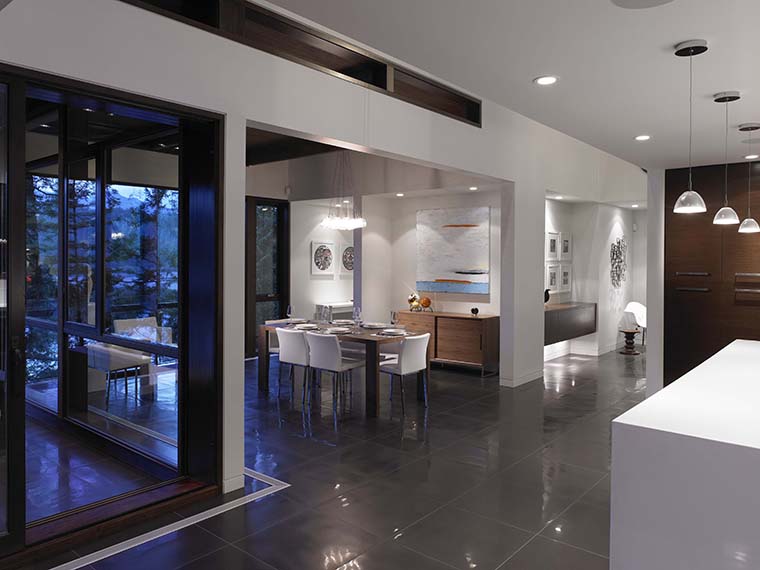 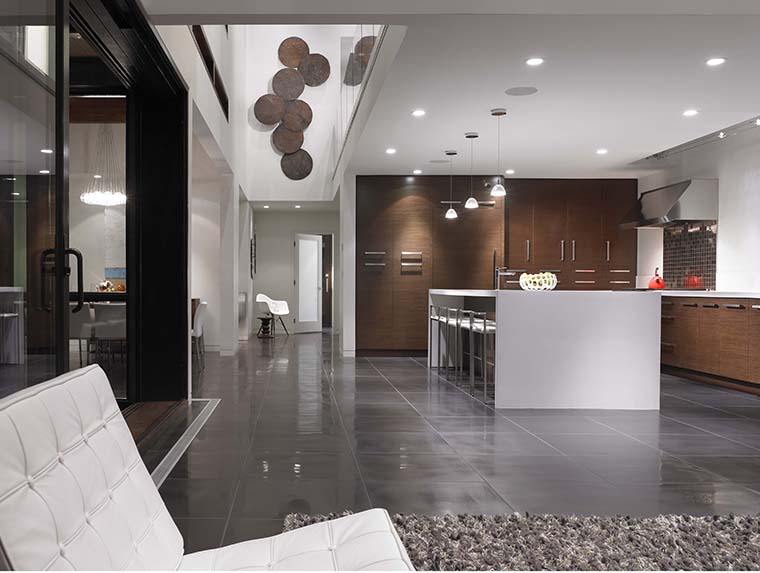 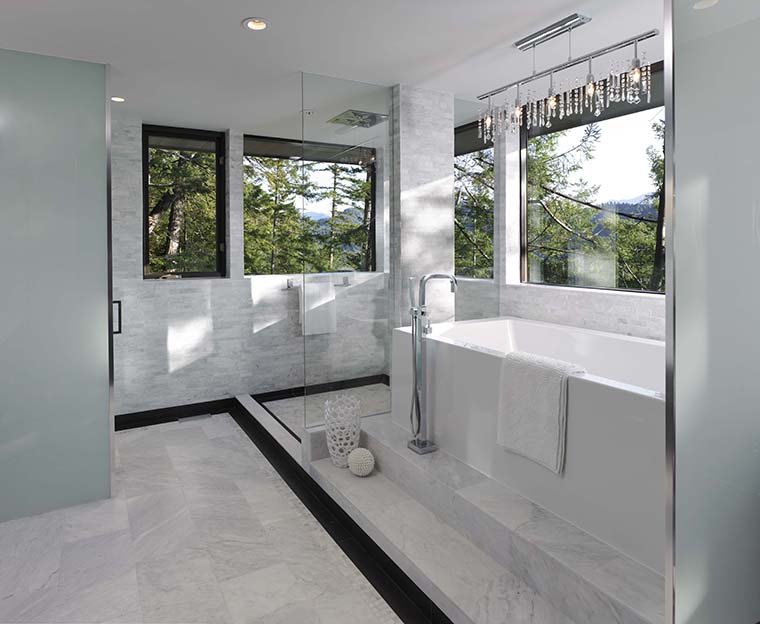 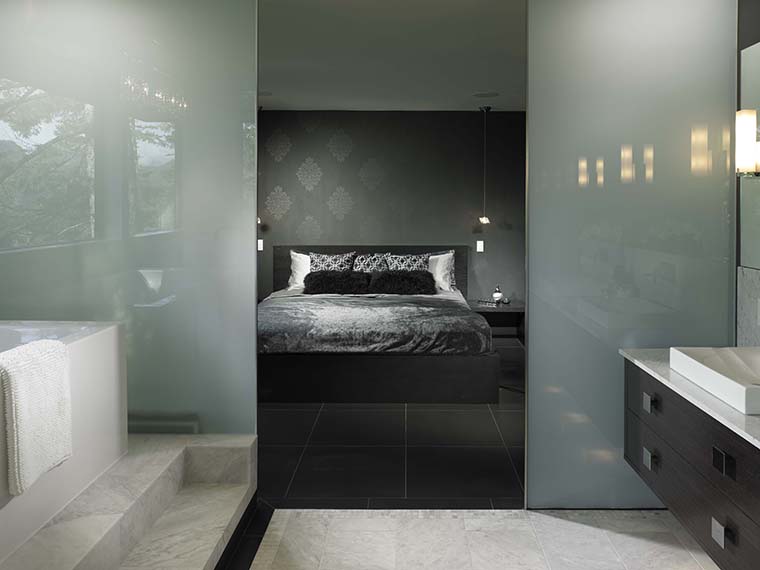 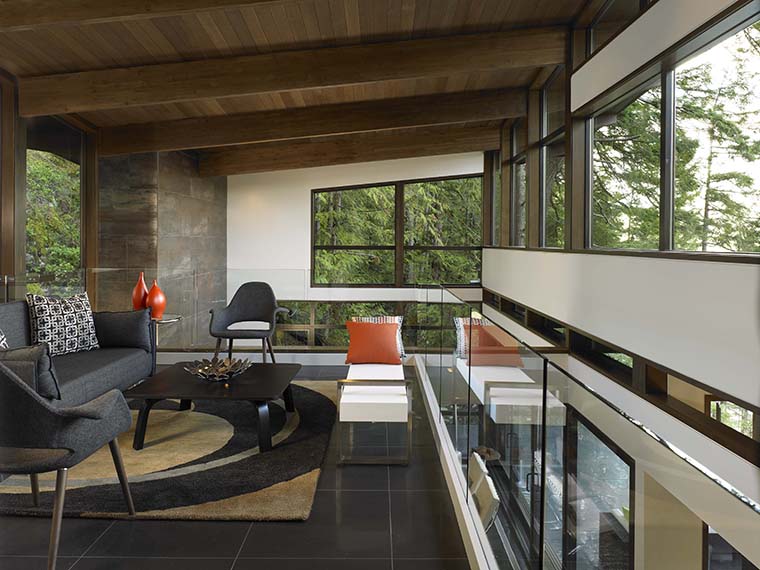 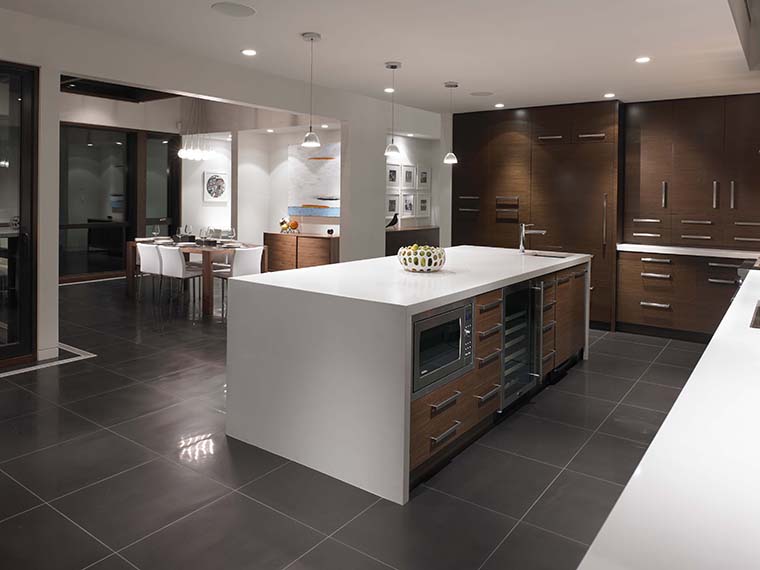 People who sail in Centre Bay rarely see this award-winning home on Gambier Island. “You have to know its exact location because it blends so perfectly with the environment,” says Graeme Huguet, the managing director of the My House Design/Build Team, who created it for two Vancouverites.
For years Gary Mynett and Johnny Bellas enjoyed boating from Vancouver to Gambier Island. They bought a waterfront lot in 2003 but had only a dock for a long time. “We originally wondered if a house could even be constructed on our steep hillside, but have since learned you can build most anywhere if you get the right experts,” Gary says.
The My House Design/Build Team first created a topographical map detailing elevations, views, and tree locations and heights. “The home looks plunked in the middle of the forest because the homeowners didn’t want trees destroyed,” Huguet explains. “We only removed about three and some shrubbery.”
The Gambier Island project has been deemed a Best Custom Home by the Greater Vancouver Home Builders’ Association. It also garnered two Georgie Awards from the Canadian Home Builders’ Association of British Columbia and an additional three awards (two gold and one silver) from the National Association of Home Builders in the U.S.
Steep landscape required the builder to bore deep holes and then dowl steel to secure the foundation to the island’s granite. The house is warmed by geothermal energy, channeled from far below into radiant-heat flooring. The continuous air curtain, which moves through a horizontal grill along the oceanfront’s window wall, provides excellent air movement, creating warm, snug interiors.
Intricately engineered post-and-beam construction facilitated the three-storey home’s open concept and expansive windows. The numerous windows blur the indoor/outdoor boundaries, as do the black porcelain tiles most everywhere, including on the deck and walkway.
The pièce de résistance indoors is the loft suspended over the kitchen with three of its four sides enclosed by only a glass railing. “When we look out, it’s like we’re floating in the forest,” Gary says. It’s also fun to look down into the great room or right above the kitchen sink.
On the same top floor, the master bedroom and ensuite also look onto the bay. Sailboats can be spotted from the elevated soaker tub.
On the main floor, the great room earns its name from its large expanse, its 20-foot-high ceiling and two-storey windows.
Johnny chose all of the furnishings and fixtures with interior designer Sarah Gallop. “The living area furniture is Mid-century Modern classic, except for the orange chair and ottoman that are contemporary takes on the same look,” he says. Porcelain tile around the fireplace has a metallic shimmer depending on the light.
A basement that’s actually at ground level holds Johnny’s art studio, Gary’s woodworking shop, a guest bedroom, and storage for mechanical elements. The home has remote-access monitoring, temperature setting, lighting, and music and television programing. “But the most amazing things about the house are the natural light and the beautiful view of the bay and how it changes throughout the day,” Johnny says.