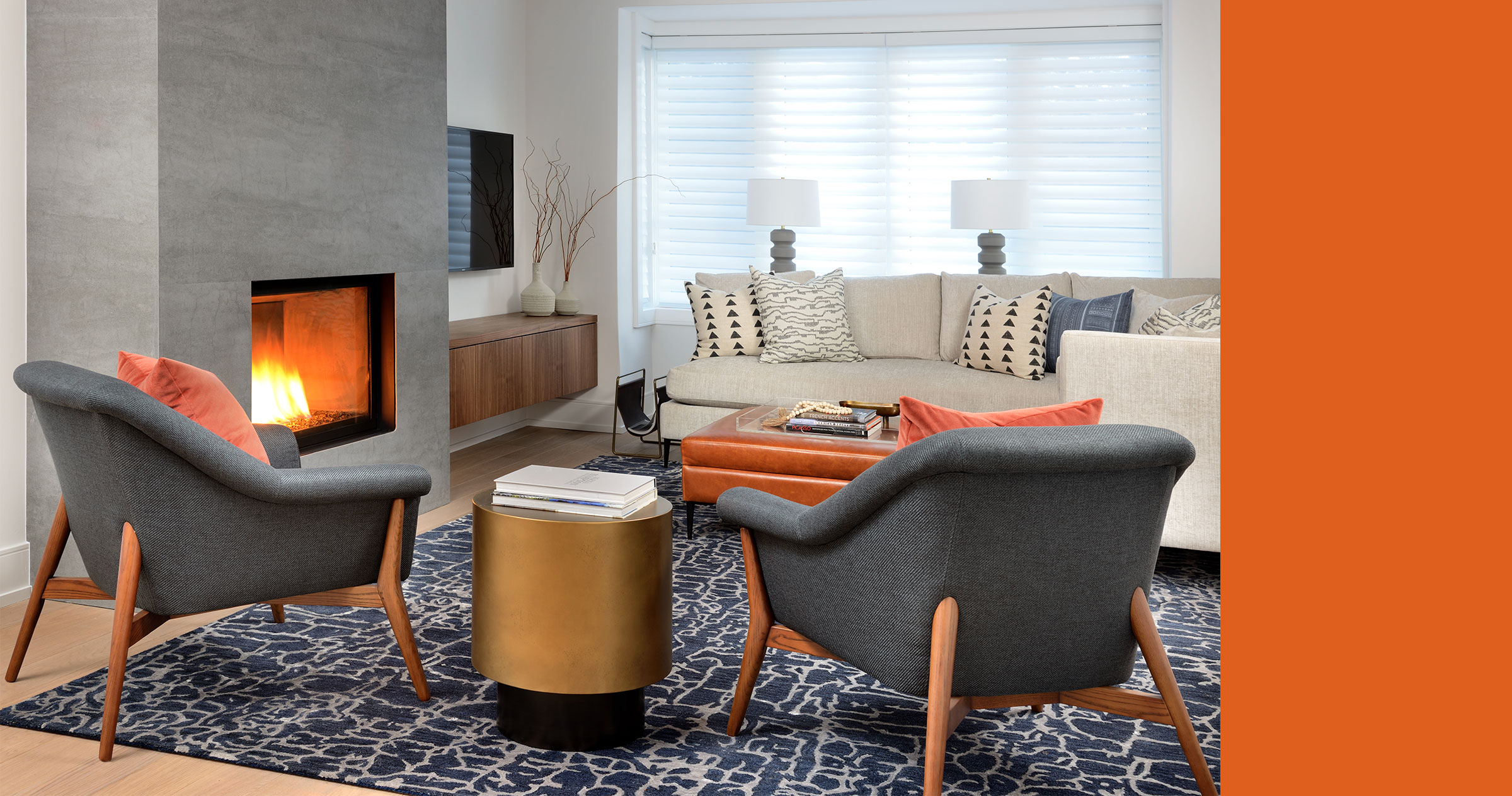 Michaela Burns has a way with lines. They appear as geometric shapes on wallpaper, in the dramatic cross-hatched veins of a faux-stone wall, and within the muted Moorish pattern in a rug.

The Toronto designer, owner of Mint Décor Interiors, is a master at imbuing contemporary spaces with interest and depth. The best way to bring visual energy to otherwise restrained designs, she says, is to introduce subtle lines and patterns.

This is just what Burns did throughout the once-traditional, five-bedroom home in midtown Toronto that her firm recently revamped with Nick’s Developments Inc. for a couple and their two teenagers.

The two-storey house, which dates to the 1930s, is solid, spacious and well-built. But it hadn’t been updated in decades, and its features—including wainscot panelling, crown moldings and drywall curtain valances—had come to feel quaint and outdated to the homeowners.

They wanted a house that would better reflect their own modern personalities and minimalist style and they were eager to be done with the traditional features.

So Burns and her team gutted the main floor, keeping only the load-bearing walls, and added an extension off the kitchen to create a family room. The old double-wide entry between kitchen and dining room disappeared, making way for an open, integrated space that accommodates a longer dining room table.

The new kitchen was outfitted with walnut-veneer cabinets equipped with plenty of integrated storage space, plus an island topped with light-grey quartz where the teenagers now hang out with friends and do homework while dinner preparation is underway on the built-in induction cooktop.

The “modernization” process continued throughout the house. A traditional staircase with long, shallow steps was replaced with a contemporary one that takes up less space, both dimensionally and aesthetically. The new stairway features treads and a hand rail made of white oak, and powder-coated steel balusters.

At every step, Burns says, her clients reiterated their desire for a minimalist, modern aesthetic. But she knew that should not come at the cost of warmth and personality. “Often, modern and minimal can end up looking empty and bare,” she says. “It was my job to bring in design elements that created interest and energy, but didn’t clutter the space,”

That’s where the lines come in. Throughout the house, Burns introduced simple, unobtrusive pattern as a way of adding energy and dimension. In the master bedroom, for example, she created “movement” by integrating not one, but several patterns: in the wallpaper, the drapery, the carpet and even the texture of the bed linens. A luxurious teal-coloured tufted velvet headboard serves as the room’s visual anchor. “The key is to keep the various patterns and lines soft, subtle and monochromatic so that they don’t overpower,” she says.

The repeating lines and patterns are at peak effect in the sleek new family room, which features a gas fireplace surrounded by a single slab of porcelain that extends from floor to ceiling, its matte-black finish punctuated by bold, oversized veining.  The designer echoed those artful strokes in the abstract black and gold-foil Satellite light fixture from the home-furnishing store Elte; it hangs from the ceiling in the centre of the room.

In another corner of the new addition, closer to the kitchen, the family now has a breakfast nook furnished with a marble-topped tulip table on an unexpected black base, surrounded by four faux-leather chairs. “This whole space has a really creative feel with its design elements and the abstract art on the walls,” says Burns. “It makes for an interesting spot to gather.”

The same is true for the living room, where the existing fireplace was re-clad in Laminam large-format porcelain slabs and flanked by a floating media cabinet that houses the sound system and television. Here again is Burns’s love for lines on display. “See how the navy-blue rug grounds the space?” she asks. “Now look how well the silver detailing in the rug marries with the smaller pattern in the stone.” •