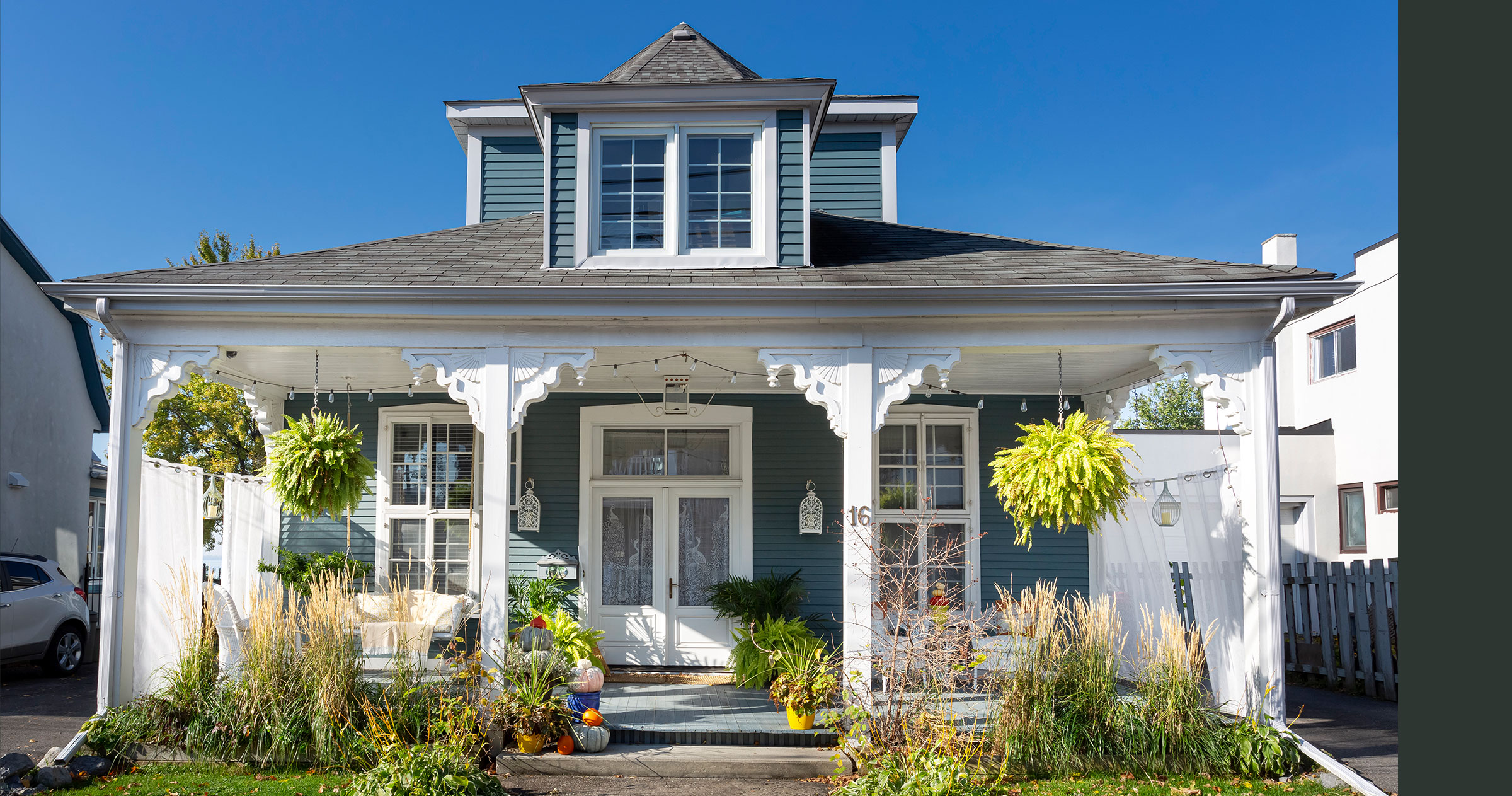 Owners and tenant feel love at first sight for this historic house, built as a summer home

Looking for the right house can be a bit like dating. We know when there’s no chemistry and it’s time to walk away. But then, when we least expect it, the right one comes along and we experience what the French call a coup de foudre: love at first sight.

That’s what happened to Donna-Marie Hallessey in 2014 when she found the home that she rents in a West Island suburb of Montreal. She walked through the front door and immediately felt as if she belonged there. “The first night I was in the house, I looked out of my bedroom window at the lake, and I felt as if I was home,” she says. “It felt so safe.”

The house, built some time between the 1880s and early 20th century, is on the shores of Lake St. Louis (a widening of the St. Lawrence River) in Pointe-Claire, and dates to a time when the neighbourhood was a summer resort area, attracting vacationers from Montreal. The municipality evolved into a suburb after the Second World War, but some architectural vestiges of the resort era remain, including this one.

The property was in serious need of care when owners Suzanne Vaillant and Howard Brown bought it in 1981, but “when I saw the doors and windows, I wanted to have it,” says Suzanne. “And I fell in love with the living room.” The curious thing about the living room is its openness to the adjacent dining area. Open-plan layouts were unusual in houses of this vintage, which generally had warrens of closed rooms.

In addition to its openness, the ground floor originally had two connecting bedrooms, each with a transom over its door, and a water closet/bathtub room between them. Two renovations later, that space now accommodates a cloakroom closet, one bedroom, a full bathroom and storage cabinets.

A third-floor octagonal cupola, which Suzanne calls “the tower,” was used as a perch from which to watch regattas on the lake.

Suzanne and Howard did some historic research on the property, but were hampered by the fact that Pointe-Claire’s town hall had burned down in 1900, resulting in the loss of historic documents. So they gathered anecdotal information from elderly neighbours. They learned that the house was most likely a seasonal retreat. “It was built by Urgel Bourgie (owner of a Quebec funeral company) probably for parties, because it was close to his other home, which was one block away. We currently live in that other house while we rent out the blue house,” Suzanne says. “The blue house wasn’t warm when we bought it and the cellar had an earthen floor, so we think it was used only during the summer.”

The couple did three major renovations over several decades, notably to accommodate their growing family; they have two sons. The first overhaul saw the insulation of the outer walls. The house’s clapboard facade was painted Wedgwood blue, recalling the style of maritime residential architecture.

The original staircase to the second storey was in the tiny kitchen at the back of the house; under it was a toilet. “We got rid of the toilet and moved the stairs to the living room,” says Suzanne. The kitchen was enlarged and modernized, and a veranda added across the back of the house, which offers Donna-Marie a wonderful place for summer lounging.

When Suzanne and Howard bought the house, it had a bedroom on the second floor along with an attic space. That storey was reconfigured to house a bathroom and two bedrooms. While renovating the space, Suzanne and Howard found a pile of newspapers dating to 1882.

They created a rooftop balcony off the second-floor bedroom that overlooks the lake. However, in a later renovation, says Suzanne, “we integrated the balcony into the structure to create a larger bedroom.”

The cupola, once connected to the second storey by a ladder and trap door, is now accessed by a circular staircase. Donna-Marie uses the space for quietude and meditation and keeps a bed in it for visitors.

In the cellar, spray insulation and gravel were added for insulation. And wherever they could, the owners saved architectural elements, including original windows and doors. “We didn’t change what we didn’t need to change,” Suzanne says. Tongue-and-groove wood walls, typical of the late Victorian era, were preserved. The floors, however, were unsalvageable, so the couple installed new maple planks.

The home’s original kitchen had been small, dysfunctional and cold, thanks to the lack of insulation and strong winds that whip across the lake. It was renovated in a style that recalls kitchens of a century ago. Old cabinet doors were repurposed to create an impressive armoire. “I hired an artisan to build the kitchen,” Suzanne recalls, adding that new large windows offer lake views.

Because the couple now live in the other neighbourhood house built by Urgel Bourgie—also a Victorian-era structure that they renovated—the “blue house,” as they call it, is lovingly cared for by their tenant, Donna-Marie.  She’s the former owner of a hairdressing salon, who now works as an intuitive medium, channeling the spirit world.

After a divorce, she was searching for a home for herself and her teenaged daughter.

Donna-Marie wanted a subdued beach-house look. “This would be my home by the sea. I wanted the look of Maine: soft,” she says. A seafoam-blue-and-white palette is used throughout the house, creating design cohesion. And true to the building’s history, Donna-Marie has placed rustic but elegant antiques throughout: a carriage seat in the entry hall flanked by a buffet, an eye-catching blue armoire in the dining area, upholstered white-painted dining chairs with distressed frames.

Creamy-hued, slip-covered sofas and chairs in the living room and den—which is an extension of the kitchen—also confer the casual ambience found in seafront homes. “Everything I own fits perfectly here,” says Donna-Marie.

Because the house was built for summer stays, she added an electric fireplace to the living room’s north wall to create winter warmth. A sofa and chairs are positioned in front of it during the cold months.

But it is the little decor touches redolent of seaside houses that create strong visual interest: a mermaid weather vane atop the dining table, beach stones in a sink, sea shells in jars, starfish on walls.

Generous fenestration on all sides of the house ensures that sunlight floods the interiors by day, moonlight by night. “I take pictures every night of the sunset,” Donna-Marie says. “It’s different every day. I love everything about this house. I get to see the sunrise and sunset every day.”

There is a palpably peaceful energy throughout the house. Shortly after moving in, Donna-Marie had a strong sense of déja-vu. “I was about to walk upstairs, and as I put my hand on the newel post, I felt a reverberation, and I knew instantly that I had been in this house before … that I had once lived here in the past,” she says. “I do feel as if I have returned home.”

Decisions, decisions. You’ve decided to renovate your kitchen. That’s the easy decision. Now comes the challenge as you face down...

Photography and Styling: Azen and Kevin Bongard Homeowner/designer Azen Bongard chose a light concrete board to surround the fireplace in...