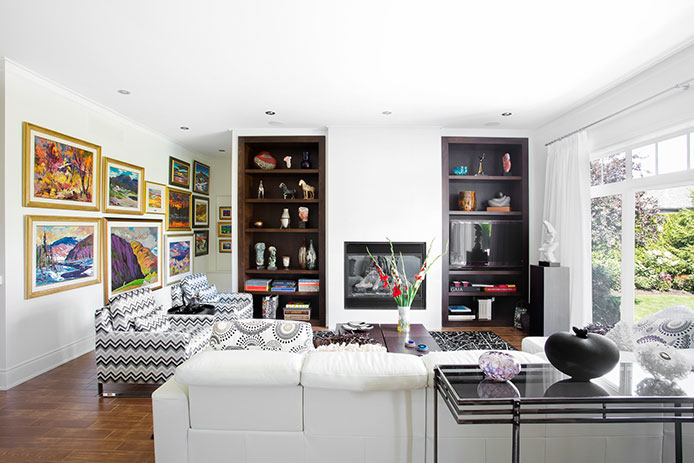 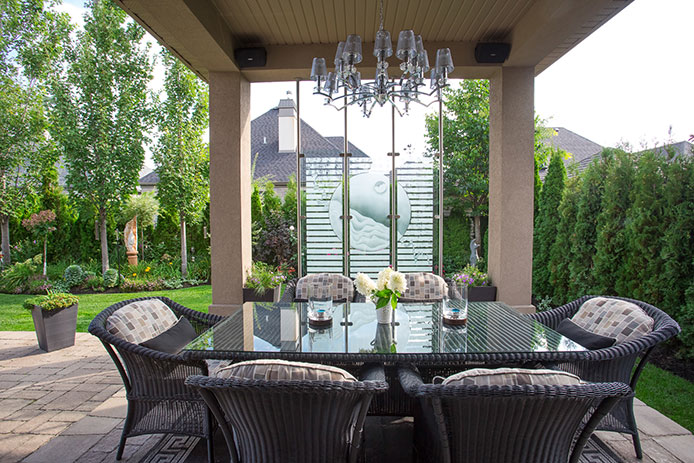 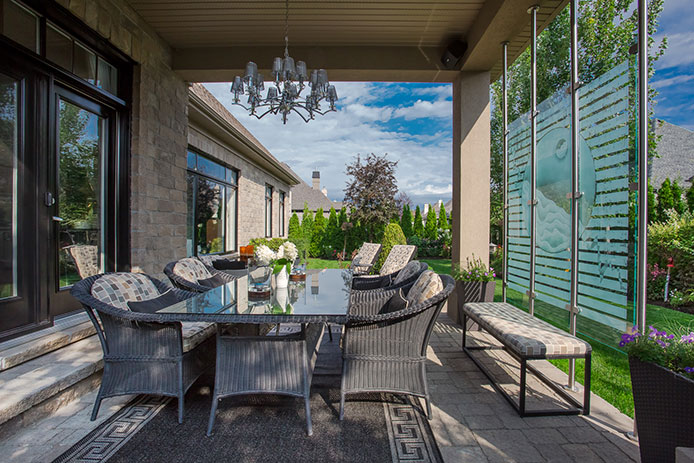 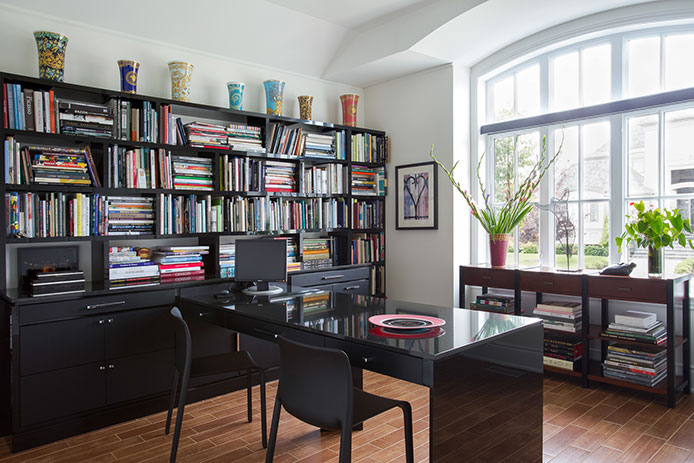 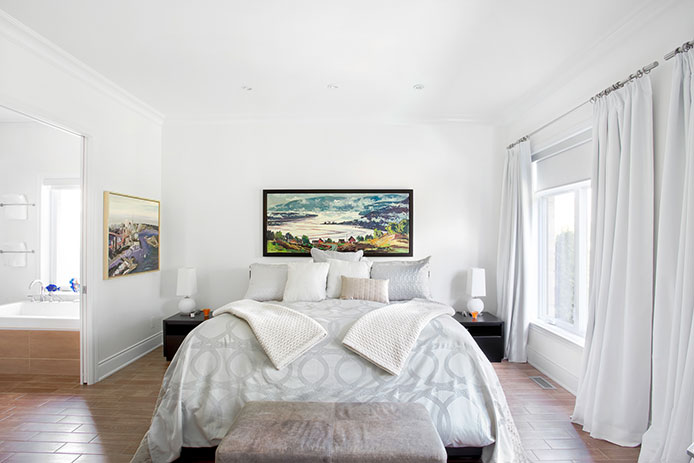 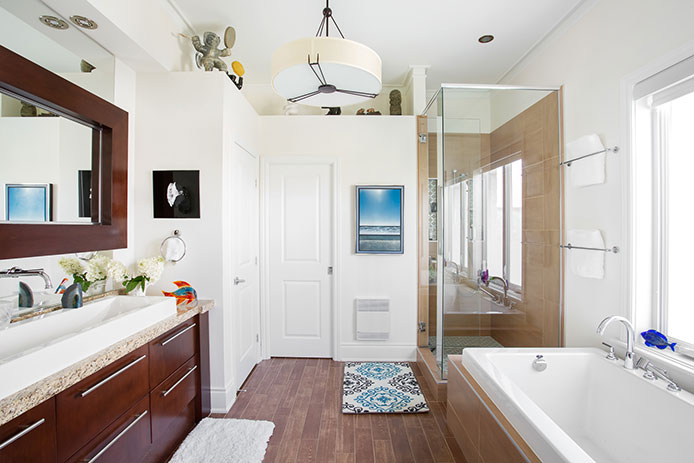 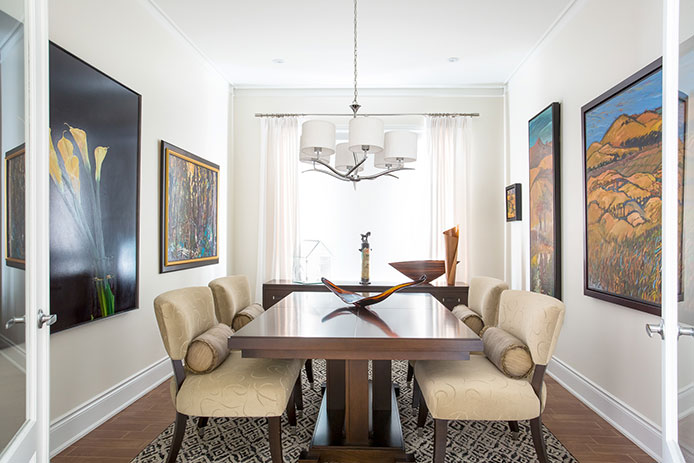 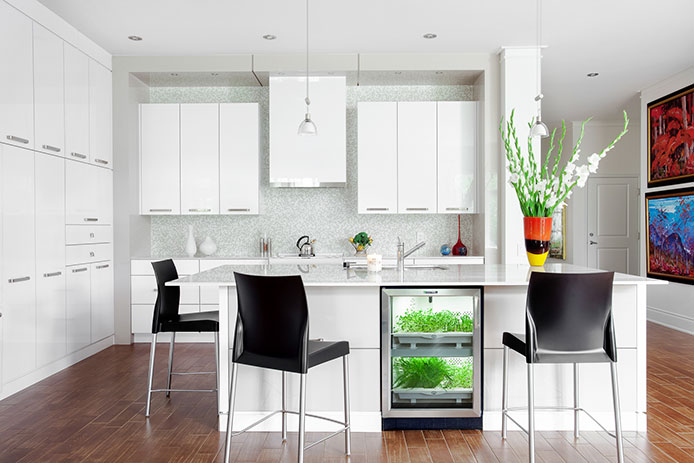 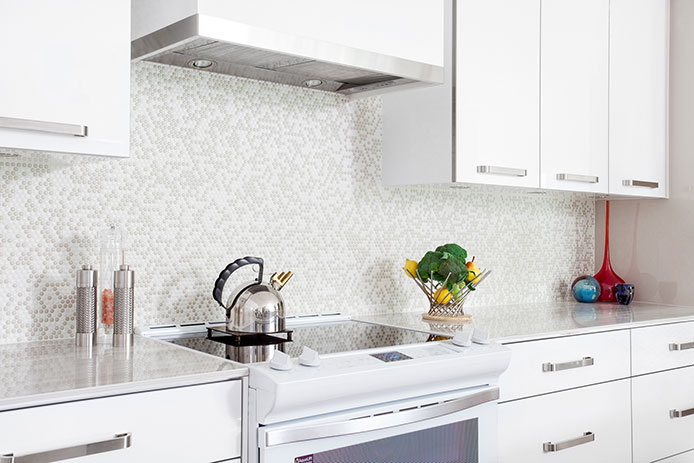 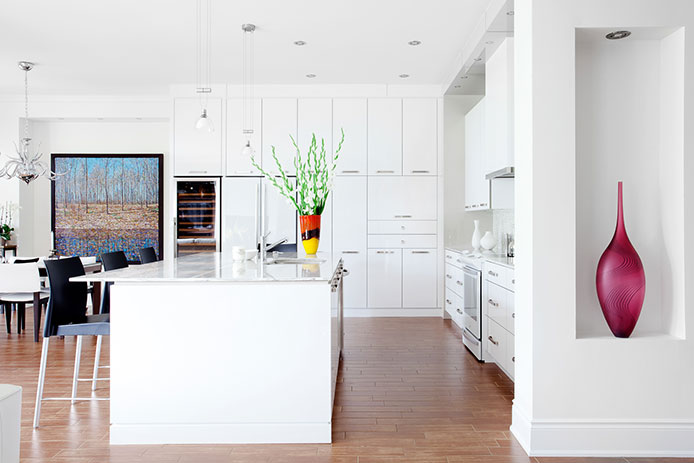 The old adage about small being beautiful often resonates with people who downsize from large homes. Interior designer Jean Monet decided it was time to move to a small and beautiful home when he realized that the upkeep on his capacious two-storey house in Boucherville was demanding an inordinate amount of his time and energy.

“The catalyst for downsizing was my elderly mother’s illness,” Jean says. “I don’t have children, and as I was looking after my mother, I began to wonder who would care for me in my old age.” Negotiating stairs and taking care of his 37,000-square-foot garden – complete with swimming pool and fish pond – would become increasingly difficult, even overwhelming, he surmised. So in March of this year, Jean bought a bungalow in a new development in Longueuil that has allowed him to scale back his living space to 2,300 square feet from 4,900. He redesigned the house and had it renovated to suit his lifestyle. And as a man who has a strong need to be surrounded by beauty and harmony, he affirms that “small is indeed beautiful.”

The challenge he faced was a tight timeline for the renovation. “We had 15 days to completely transform the bungalow into my custom home,” Jean says. To do that, he engaged architectural designer Nataly Houle and Entreprises Les Constructions Manuel Gonzalez, with whom he often collaborates on design projects.

“I carefully chose my team and planned every last detail. I was on-site day and night during the renovations. I think the key ingredient is to find the perfect contractor,” he says. Because the bungalow was built in 2008, few structural changes were needed, and most of the renovation was focused on creating the aesthetic that Jean wanted. “The only structural change I made was to alter the laundry room, which had been open to the master bedroom’s closet,” he says. “I had a wall built to separate the two spaces; it turned the laundry room into a utilitarian space and created more room in the closet.”

The house originally had three bedrooms. Jean transformed one of them into a formal dining room and the other into a home office/library. The electrical system was also changed to accommodate the addition of LED lighting throughout the house.

He also converted the second bathroom into a powder room. “As a designer, I’ve always said that the powder room is the most important room when you’re entertaining,” he says. “It should be incredible.” The inspiration for the powder room occurred at one point during the design process. “I awoke during the middle of the night; I had had an outrageous vision and the next morning, I called Nataly Houle to explain what I wanted. At first, she wasn’t getting it but eventually, she understood.”

Jean’s vision resulted in a set of custom-built, suspended acrylic shelves in the space once occupied by a bathtub. They’re used to display a collection of sculptural art.

The other major transformation was the kitchen. Jean hired Cuisines Beaucage to create a functional and beautiful space. “The old kitchen had been poorly designed,” he says. “The stove door almost hit the island when it was opened, the storage space was limited, and the dark wood cabinets looked dated.”

The first task was to banish the dark cabinetry. “The space had to be happy,” says Jean. “I was emerging from stormy days in my life and I wanted to return to sunny days.”

The cabinets are white Acrylux, edged with stainless steel. “I wanted it to be ultramodern but I also wanted it to age gracefully,” Jean says. “The first concern was colour; I wanted the kitchen to be bright but not stark. In an open-plan house, the kitchen is the focus and it has to be the draw.” To prevent monotony, the cabinetry is in two colours: white on the bank of wall cupboards and a shade of taupe on the island. And the backsplash of randomly patterned tiny round ceramic tiles is in both those tones. There are luxurious touches, too. The island is topped in a vitrified glass that resembles marble.

The formal dining room is reserved for cool-weather dining. “In the summer, we eat outside or at the kitchen island,” Jean says.

One room that Jean didn’t want in his new home was a formal living room. “People don’t use them anymore,” he says. The open-plan floor layout connects the kitchen to a comfortable family room space, where the focal point is a gas fireplace flanked by built-in maple bookshelves that display statuary and sculptural artworks. Here, a sectional sofa and two armchairs are sensual invitations to relax and gaze upon the backyard garden through large picture windows. The adjacent master bedroom also boasts large windows with a garden view. “I didn’t want the decor in the bedroom to be overpowering because the backyard is like a painting, a work of art through the windows,” he says.

The whole house was designed to be an elegant backdrop for a vast collection of art. The little corridor space leading from the family room to the master bedroom is dedicated exclusively to the work of the late Quebec painter Bruno Côté; here, 14 of the artist’s paintings are artfully hung. “I think Bruno Côté is one of the greatest painting talents we have in Quebec,” Jean says.

One room that has become something of a sanctuary is the home office/library. “It’s located on the sunniest side of the house,” Jean says. “Because it’s so bright, I could afford to restrict the decor colours to black and white.” That includes a custom-built desk topped with Nero Assoluto granite. A wall of built in shelves, topped by a collection of Versace vases, holds a collection of art books. “I spend a lot of time in here,” Jean says. “Moving from a larger home, I realize that human beings are creatures of habit. We use the same space over and over again.”

That habitual use is different in the new bungalow where every room is used to its maximum. “I have never been so happy in a home as I am here,” Jean says. “This is a happy place. I’ve closed one book and opened a new chapter in my life.” •

DALLY IN THIS DAYBED