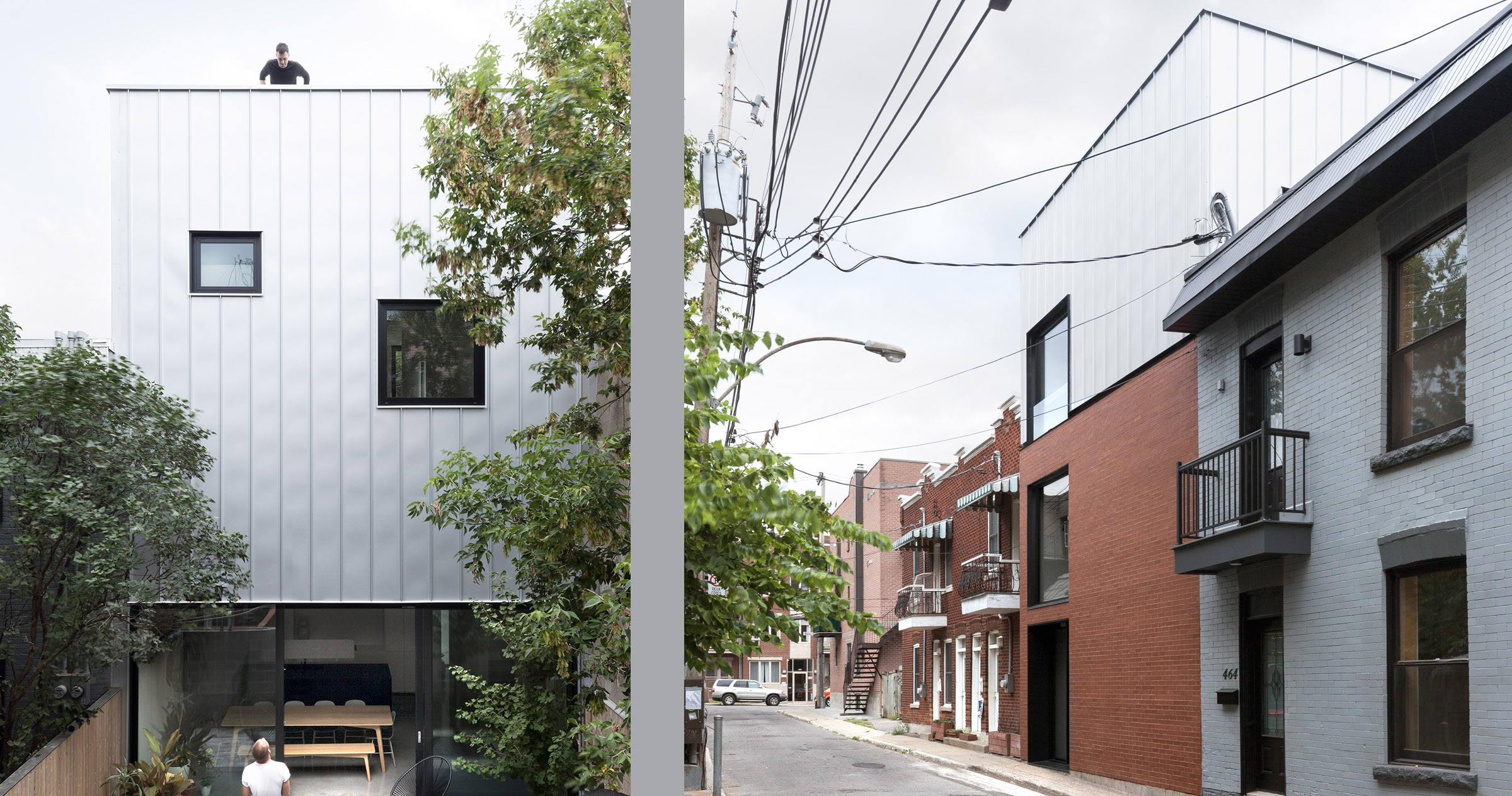 Nelson De Sousa’s new family home in Montreal’s Plateau Mont Royal district started out as extra parking space. For a few years he lived right next door to it, in a small old house he bought after moving back from Europe.

“The house wasn’t really to our taste, but the property had two parking spots and we thought it had potential and that we could build there someday,” Nelson says. The plan was to subdivide the lot, and eliminate the parking spots to make way for an income property, either a duplex or triplex. But plans change. He called on the architects at la SHED, to talk over his ideas. He had seen some of their work before, and was impressed. To his surprise, they suggested that instead of opting for rental units, a better choice might be to build a new home that could be exactly what he wanted, and sell the one they were living in at the time.

“We thought that was a crazy idea,” Nelson says. Gradually, though, it started to make sense.

Because the neighbourhood is older and densely populated, there aren’t many building lots available, and few opportunities to create something new, says Sébastien Parent, one of the architects at la SHED involved in the home’s design.

The biggest constraint his team faced was the small size of the lot and the neighbourhood zoning requirements. The house could be no more than 20 feet wide and 25 feet deep, on its 20-by-35-foot lot. “The living spaces couldn’t physically fit on the same floor,” Parent says. “They wanted vast open spaces with light; they didn’t want tight little rooms.” Since it wasn’t possible to build out, they would have to build up.

The kitchen and dining room take up the main floor, with a double-height ceiling over the dining area, and a mezzanine over the kitchen that is a living area. The mezzanine has a view to the back outside wall with its large windows and glass doors. It also has its own floor-to-ceiling window to provide still more natural light. The ceiling is a little lower than usual on the mezzanine, but that adds a sense of intimacy to the space, Parent says. “Because it’s completely open, it makes the space very comfortable. You don’t feel squished.”

Upstairs there are two bedrooms and a family bathroom, with stairs that lead to a rooftop terrace, complete with hot tub. In the basement, there’s office space, a small home theatre and a second bathroom. The space, Parent says, is compact, but complete. Everything the owners wanted is there.

“Each floor has a different vibe, a different purpose.” Nelson says, and each floor also has an area set aside for his young son to play and store his toys. On the bedroom level there’s a cozy cupboard, Harry Potter-style, tucked under the stairs to the roof deck. It’s large enough for both play and storage space. The toys need to be tucked out of sight, he says, to preserve that contemporary, minimalist design.

The home’s best feature, he adds, is its abundant natural light, though he concedes that there are drawbacks to having extra-large windows. One day, Nelson says, he counted how many of the neighbouring homes could see into his dining room – and hit 14. “We put in these huge glass doors, 11 or 12 feet tall, so at first we thought, ‘Oh my God, that’s too big, what can we do?’ ” he says. “We got rolling blinds, but we never put them down. You just get used to it.”

That close proximity to so many neighbours is a small price to pay to live in such a great neighbourhood, Nelson says. He doesn’t need a car, can walk to work or the metro, is close to trendy Mile End and, before his son started school this year, the day care centre was practically next door.

The project didn’t exactly stay on budget, he concedes, mostly because he loved so many of the ideas the la SHED team proposed. “They’re artists, and when you see what they can do it’s hard to say we’re going to cut this, because it looks awesome.” •