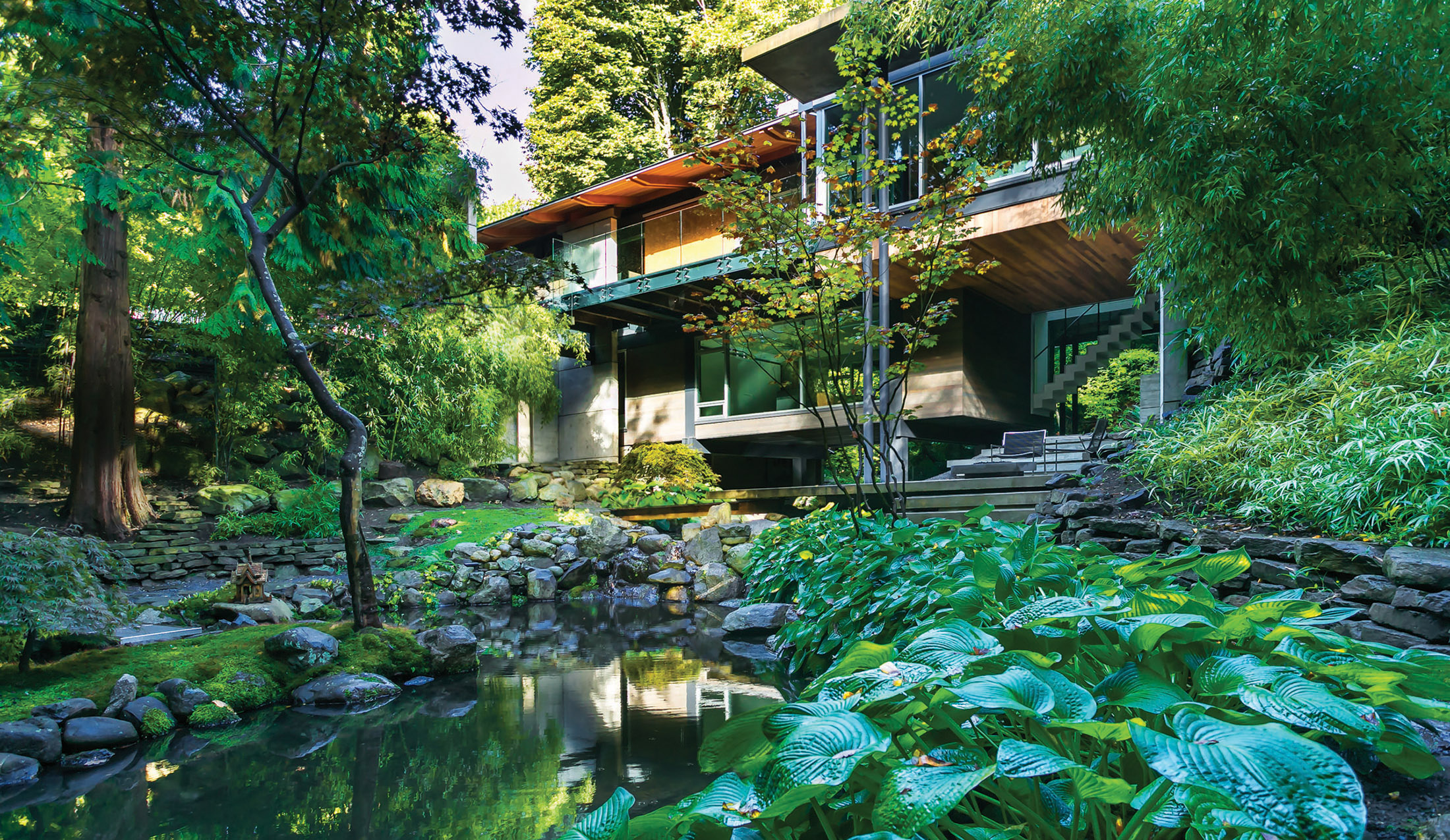 Landscape dictated the design of this Dunbar-Southlands home

For some people looking to build a new home, the location – the neighbourhood – is the prime requisite; once it’s chosen, they find a site and build a home that suits their needs and wants. Other people have a strong idea of what they want in terms of home design, and they go looking for a site to accommodate it.

And then there are those who simply chance upon a plot of land, fall in love with it, and build a house that makes the best of the site’s features, as did the owner of this home. “I saw it on the Internet,” the homeowner says. “It was listed through Macdonald Realty, and Allison Brooke brought me to it. I saw it for about five minutes and decided to buy.”

The homeowner says that he was originally looking for a townhouse in the city, but because this garden was so unconventional, “I talked myself into considering it. It took me to a place that was so unexpected in its surroundings. You’re transported into a whole other world when you come past the gate. You don’t see any neighbours, nor any traffic on the street.”

The garden at that time was in poor condition. “It was terribly overgrown,” the homeowner says. “It was like a massive jungle. Ivy had choked nearly everything in it. A gunnera plant on the island had taken over the whole pond.” It took two years and the expert help of Joe Fry of Hapa Collaborative before the garden was under control. Fry cleared the jungle and installed mostly native plants, and the garden’s charms are now fully revealed.

The lot is on a ravine, with Khatsahlano Creek running through it down to the Fraser River. The site was originally a corner of a 10-acre estate and was built as a Japanese water garden in the late 1800s. The estate was subdivided in the 1950s, and the house before this current one was erected in 1964. “The old house was really cool,” says the homeowner. “It was featured in Sunset magazine.” 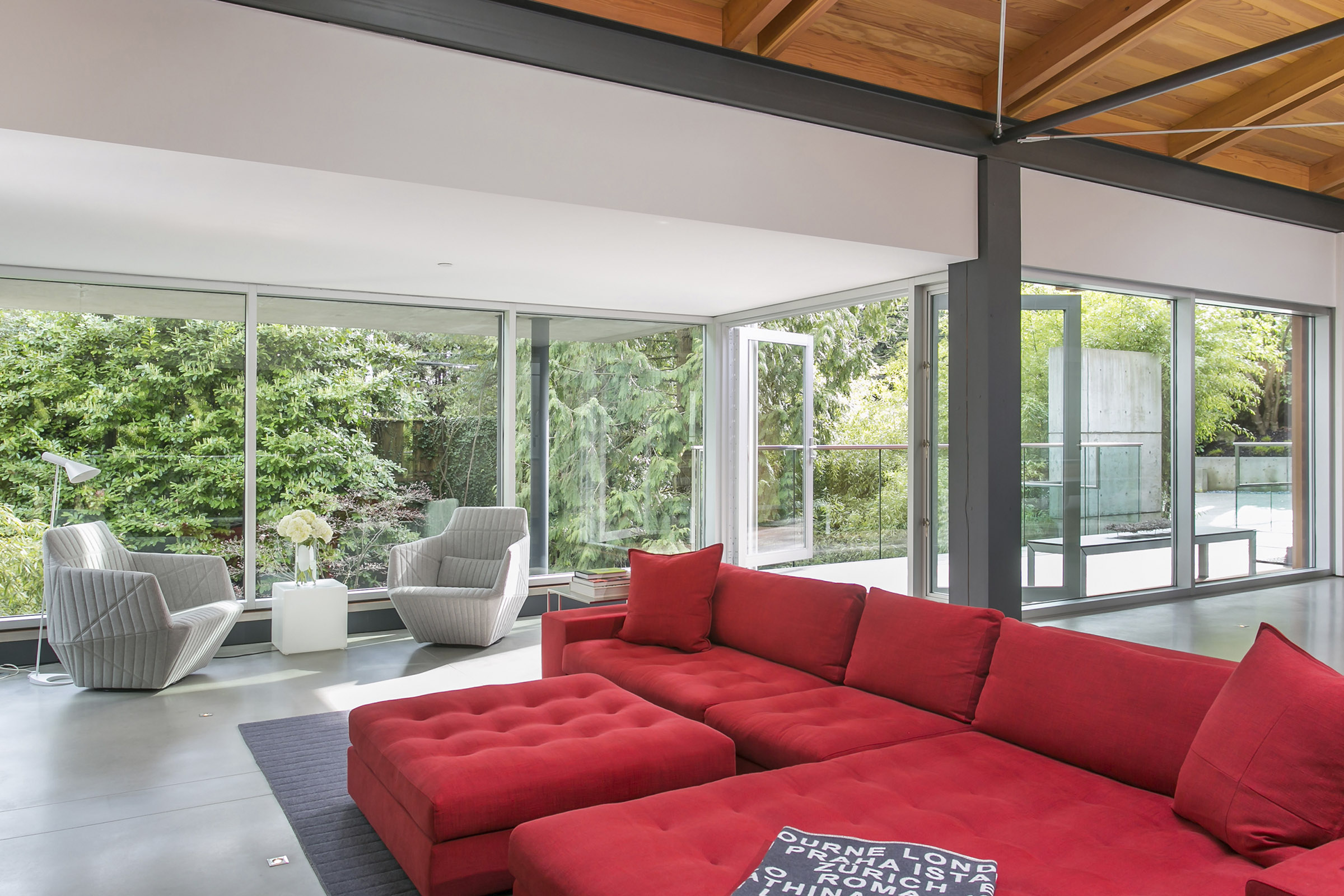 Despite its cool quotient, the old house was not sound, and its low ceilings were oppressive. What was intended to be a straightforward reno turned into a reno so thorough that, ultimately, only the four timber posts from the original foundation – a pair anchored on each side of the creek – were left.

The challenge of designing a dwelling equal to the setting fell to the homeowner’s friend, architect Alan Boniface of Dialog. “I had worked with Alan on a couple of other commercial projects, and I desired to do a house project with him,” the homeowner says. “We’d always said we’d build a house. I phoned him and said ‘I’ve found it.’ ” 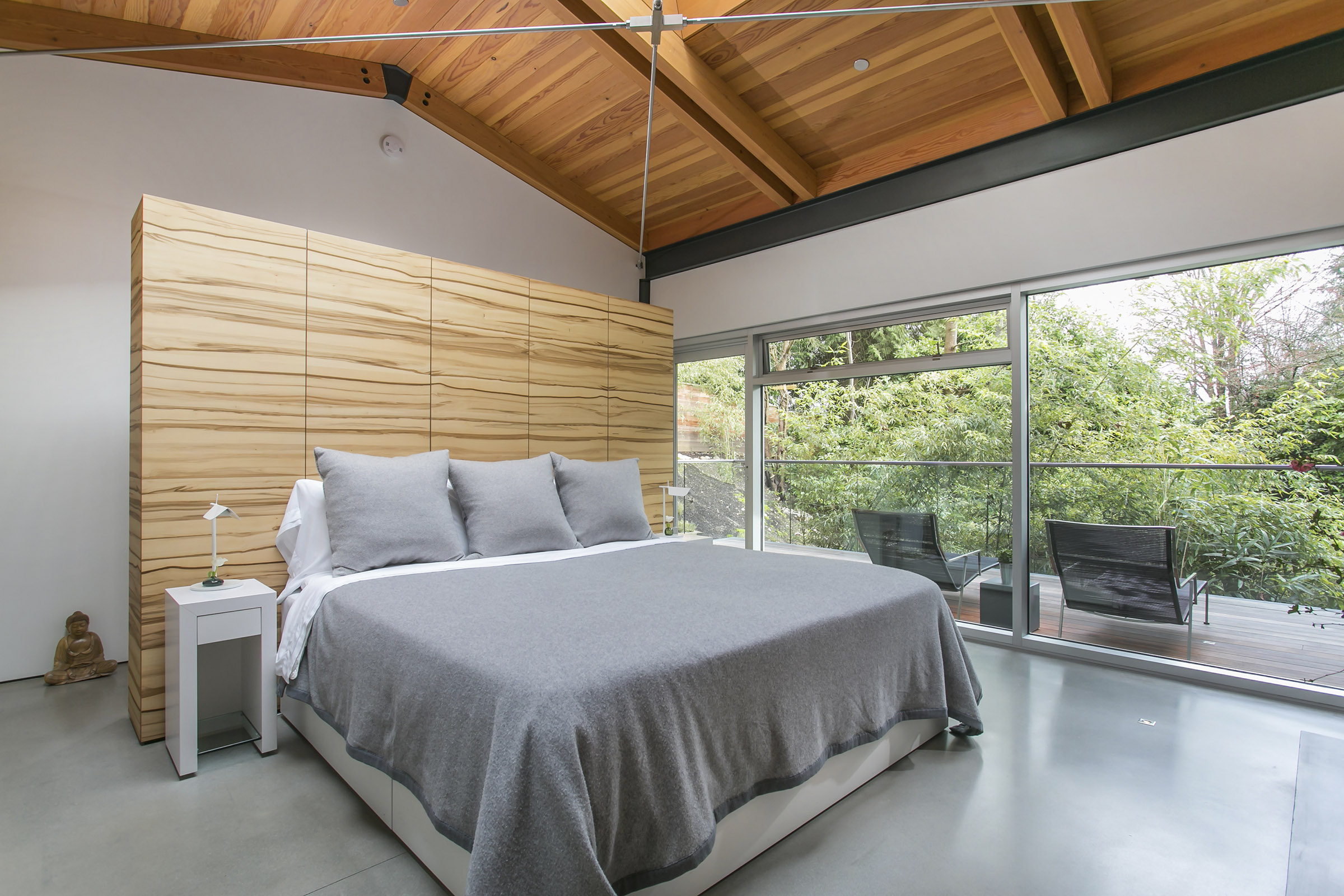 Boniface’s first observation was that anyone arriving at the house should have the garden’s splendour revealed gradually rather than all at once, and he envisioned a walkway from the driveway that would lead to the front entrance. It was a start, and design proceeded from there. But as soon as builder Brad Martin of Treeline Construction ripped the roof off the old house, work had to stop as the building’s inadequacies were manifest. It was back to the drawing board for Boniface.

The revised plan has produced a new house that covers exactly the same footprint as the old one, but offers much more within its nearly 3,000 square feet. It’s designed for a couple – no children – and there isn’t even a guest bedroom within its generously windowed shell. It truly is a retreat for the semi-retired inhabitants. 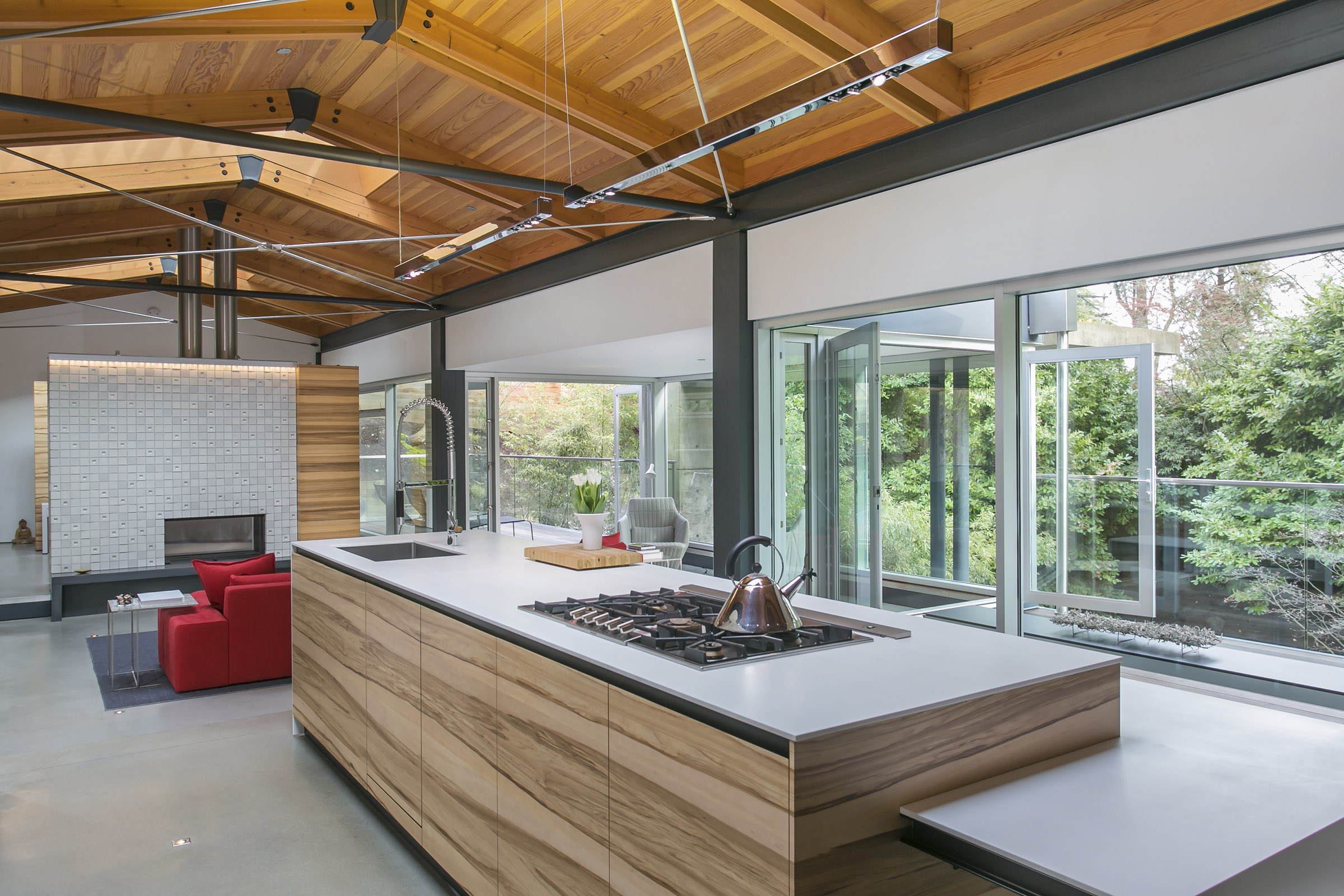 The upper floor is the main floor, being roughly on a level with the street. It’s mostly one large room containing kitchen, dining, living, and bedroom areas, with the bedroom and its ensuite bathroom being screened from the living space by a tall fireplace. There’s also a powder room and a garage. A spectacular one-piece staircase leads down through a glass-enclosed stairwell to the lower level with its flex space (TV room and workout area) and a full bathroom with a huge window giving a view of the garden to anyone luxuriating in the soaker tub that’s fondly referred to as “the spa.”

The homeowner has had a machining business for many years that makes precision parts, and he’s delighted by the attention to detail indoors and out. He says that lead architect Vance Harris has an “amazing eye. Vance and I worked through every single detail. Everything has an architect’s touch on it – for example, stainless steel trim edges on windows where concrete ends.”

Similar attention was given to external finishes. “Because of my business and the availability of metals, we did interesting things,” says the homeowner. He cites the metal roof with its integrated metal gutter that drains runoff into a stainless steel trough, which traverses a concrete wall and leads directly into a storm sewer. He also likes the driveway; rather than being plain, it’s embedded with replicas of universal joints, the cuplike objects looking like “coins in a fountain.” He’s also proud of the doorsills, which are solid anodized aluminum machined in his factory. 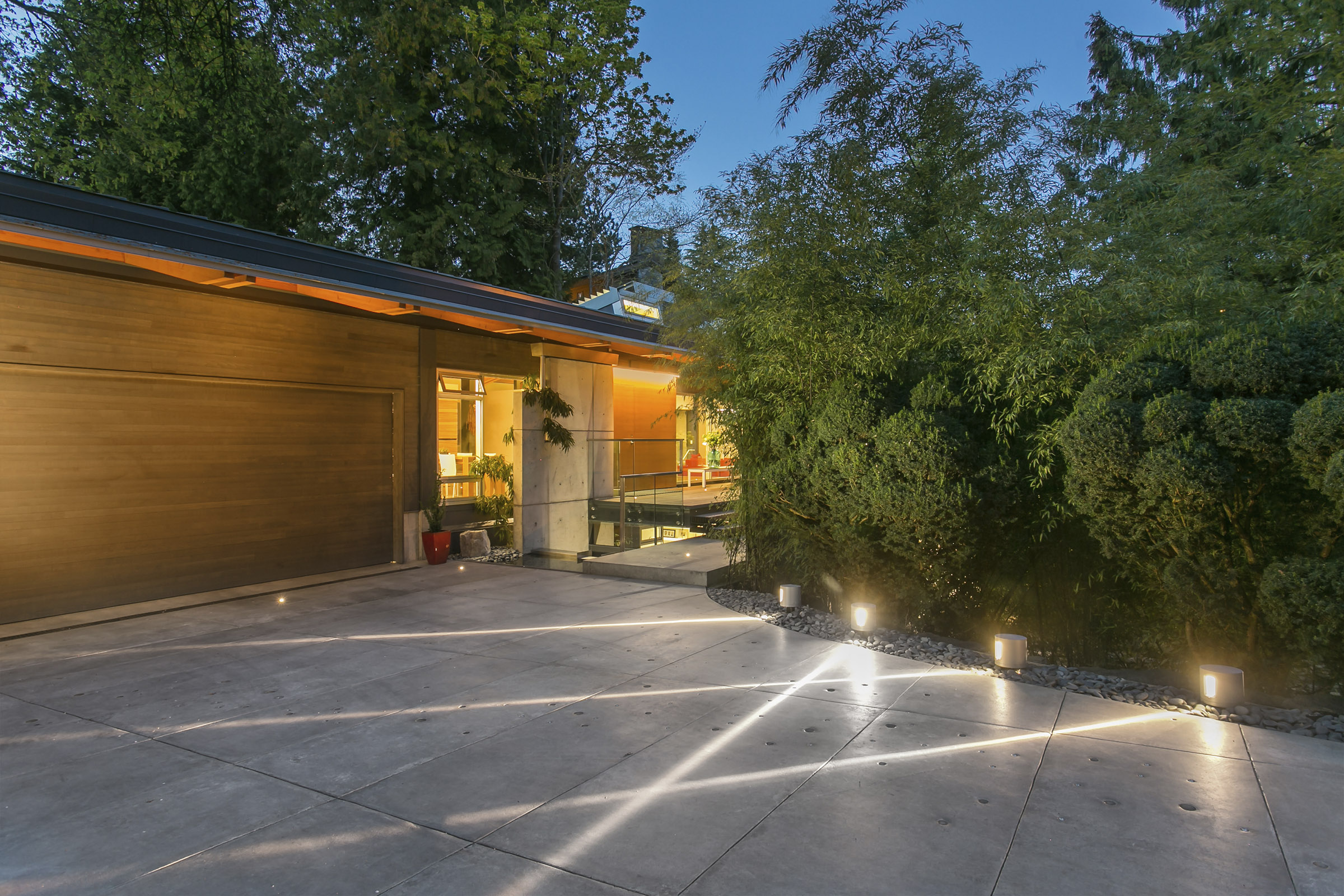 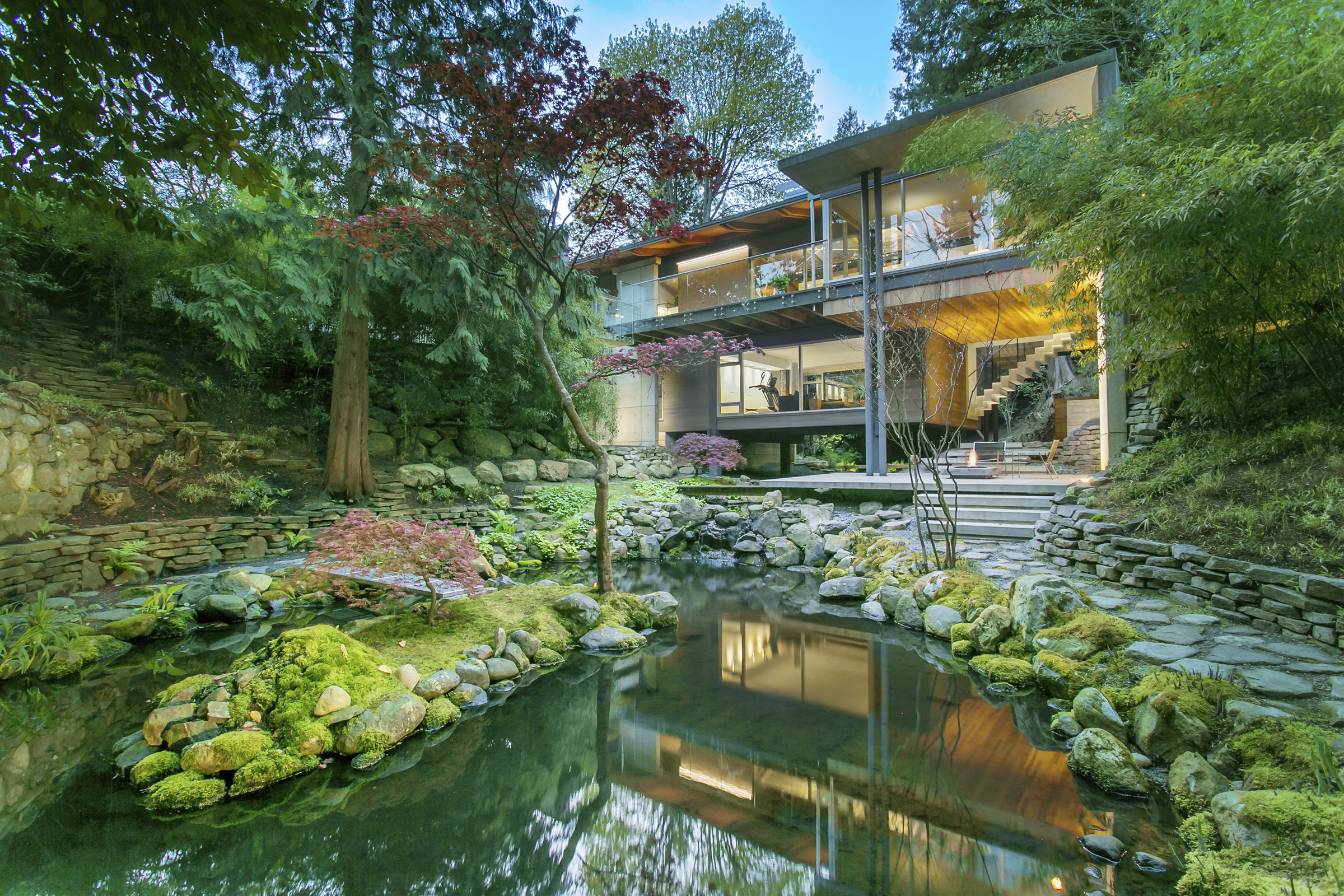 Despite their pleasure with the home and its bosky surroundings, the homeowner and his partner must move to accommodate changes in their lifestyle. The property is now for sale. It has been a secret delight for more than a century, and one hopes that it continues to be so for future owners well into this new millennium. •