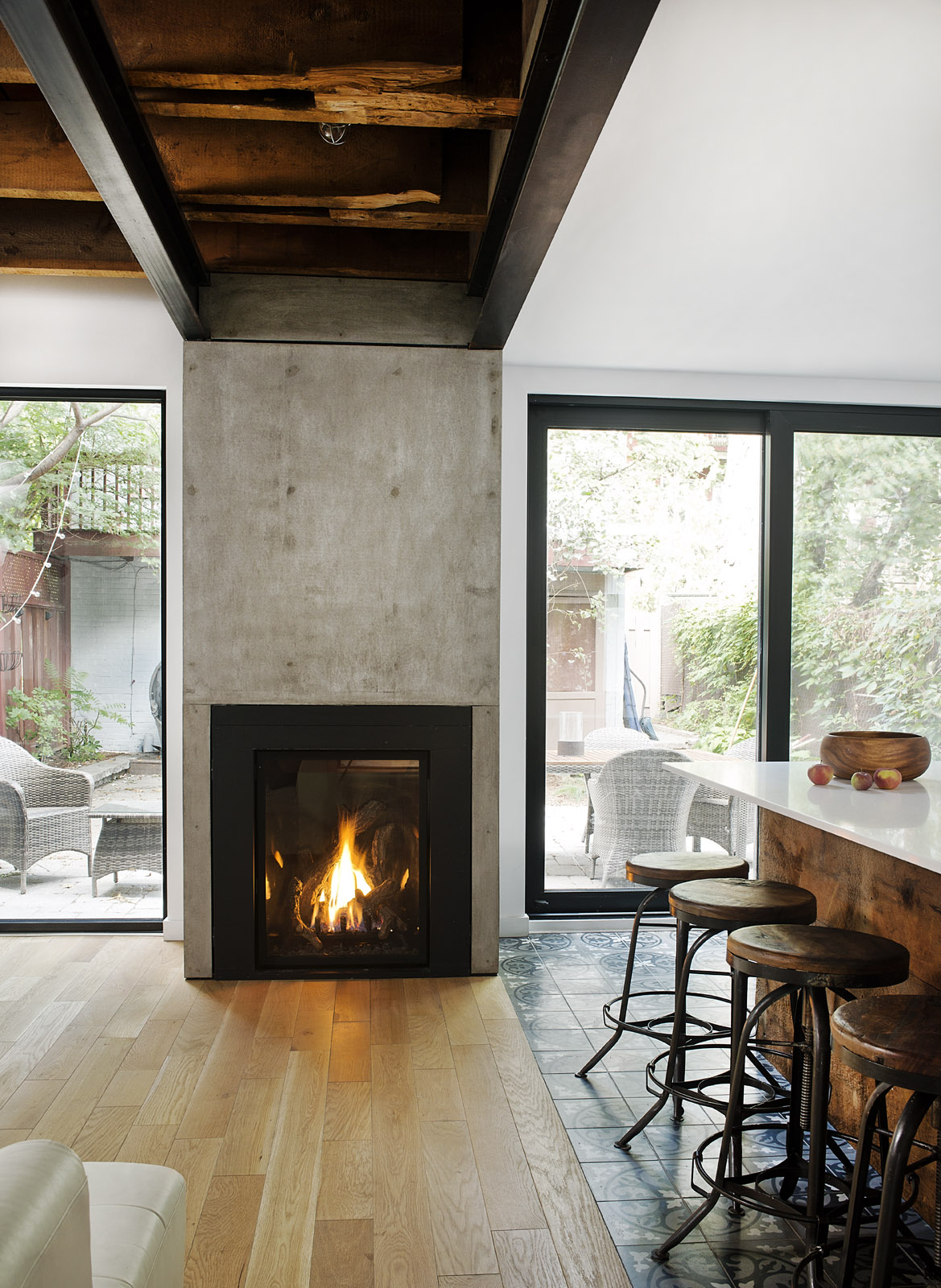 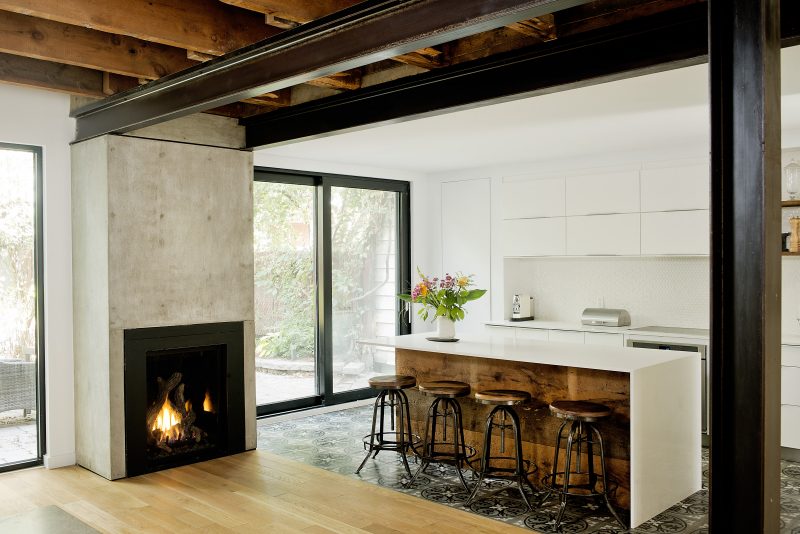 Sometimes, a house is like a book. It should not be judged by its cover. Because once you open it up, you might be surprised by the wondrous tale that awaits. You might just find yourself getting lost in an adventurous journey that transports you to another time.

So with that in mind, let’s take a peek behind the door of what – from the outside – looks like a typical Montreal duplex in the city’s Plateau Mont Royal district. But you have been warned; please leave your preconceived notions on the front stoop. 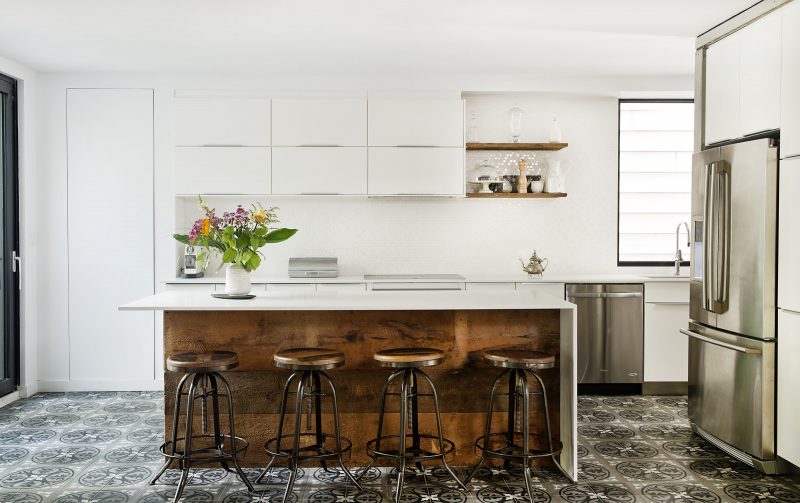 The front of the island, which is topped with white quartz, is finished in aged wood that was part of the original house. The floor is hand-made concrete tiles from Morocco.

“We tried to give life to the history of the house,” says Yvane Le Dot. She and her husband, Mathieu Sirot, bought the property in 2013 with a plan to convert the building, which was two small apartments, into a single-family dwelling to provide enough room for their young family.

The property also included a rare garden house, a completely separate dwelling in the backyard that the couple has since renovated as well. The garden house, or back house, does not have street access and is believed to be only one of four left in this district of the city, a remnant that harkens back to the past. It was a feature that sold the couple on the property the moment they saw it. Their plan was to be able to have room for friends and family who visit from the couple’s native France, but also, in the longer term, be a place where their children could live when they are older.

But first, they focused on converting the principle residence. 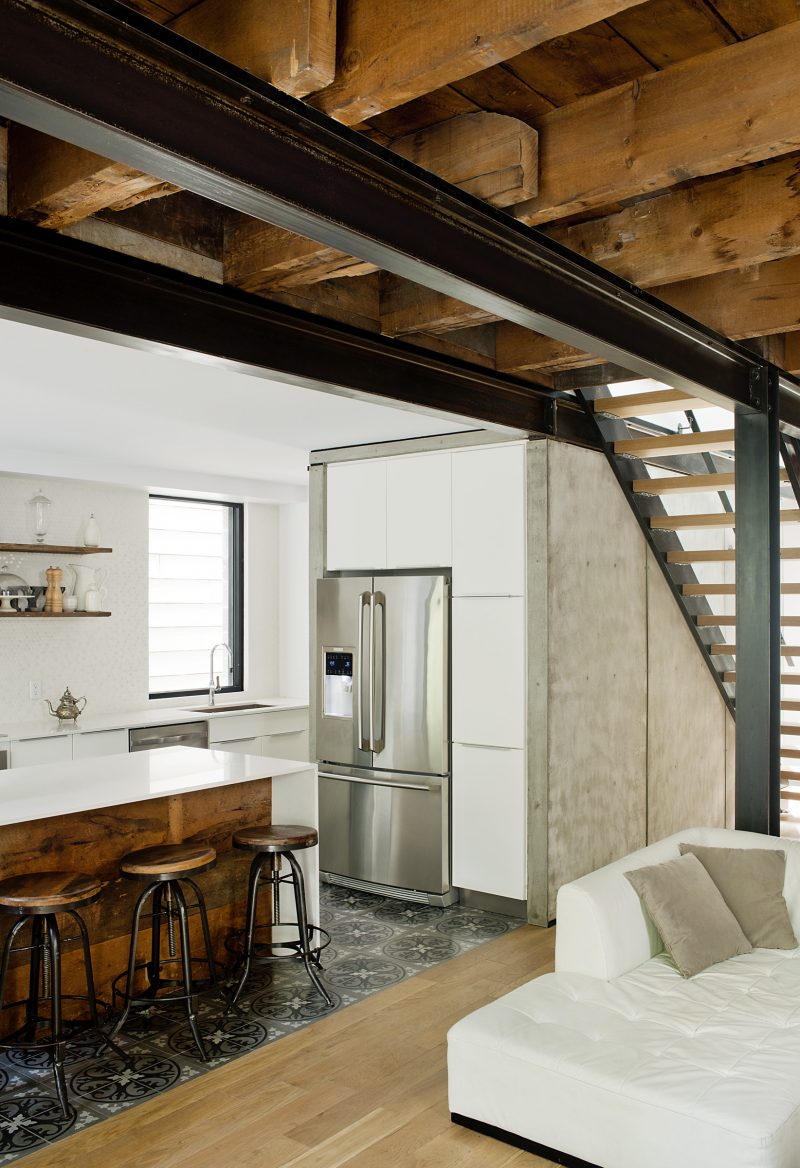 For that, they turned to architect Eric Joseph Tremblay with l’Atelier Boom Town, a Montreal-based architectural firm. He assessed the structure and devised the plan to transform the building. It started, he explains, with changing the position of the staircase, and opening it up to be part of the living area on both levels. And this is where the story really begins. 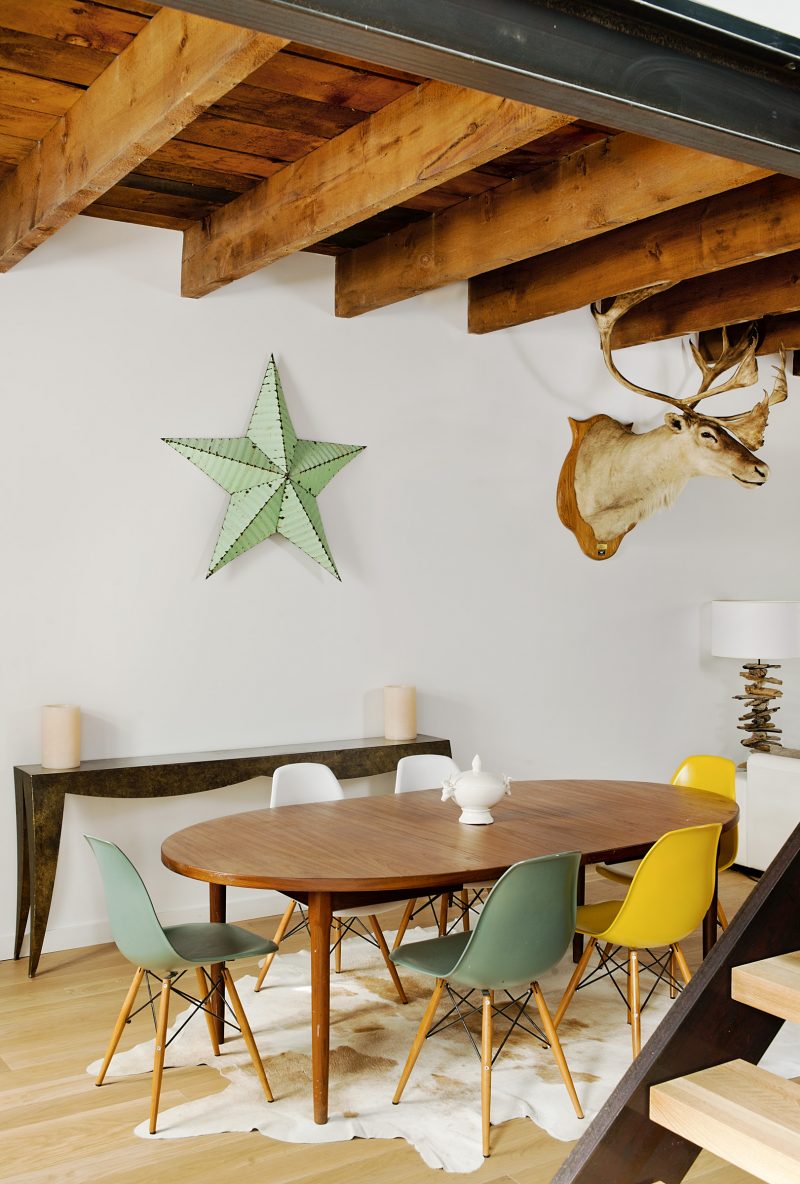 “The idea was to have it as open as possible,” Tremblay says. The plan was to enlarge the windows at the back and improve access to the yard, while keeping the front virtually visually unchanged to maintain the home’s privacy, as it sits directly on the sidewalk.

Inside, much of the old house was stripped away. But as this work progressed, they discovered parts of the past that they wanted to incorporate into the new look. “Often we plan a lot before we go. But with this project, we left a lot to adjust on the work site,” Tremblay says.

The first discovery was the trusses that supported the second floor. Today, they are fully visible, giving the main-floor ceiling what Tremblay calls an “industrial-rustic” look. 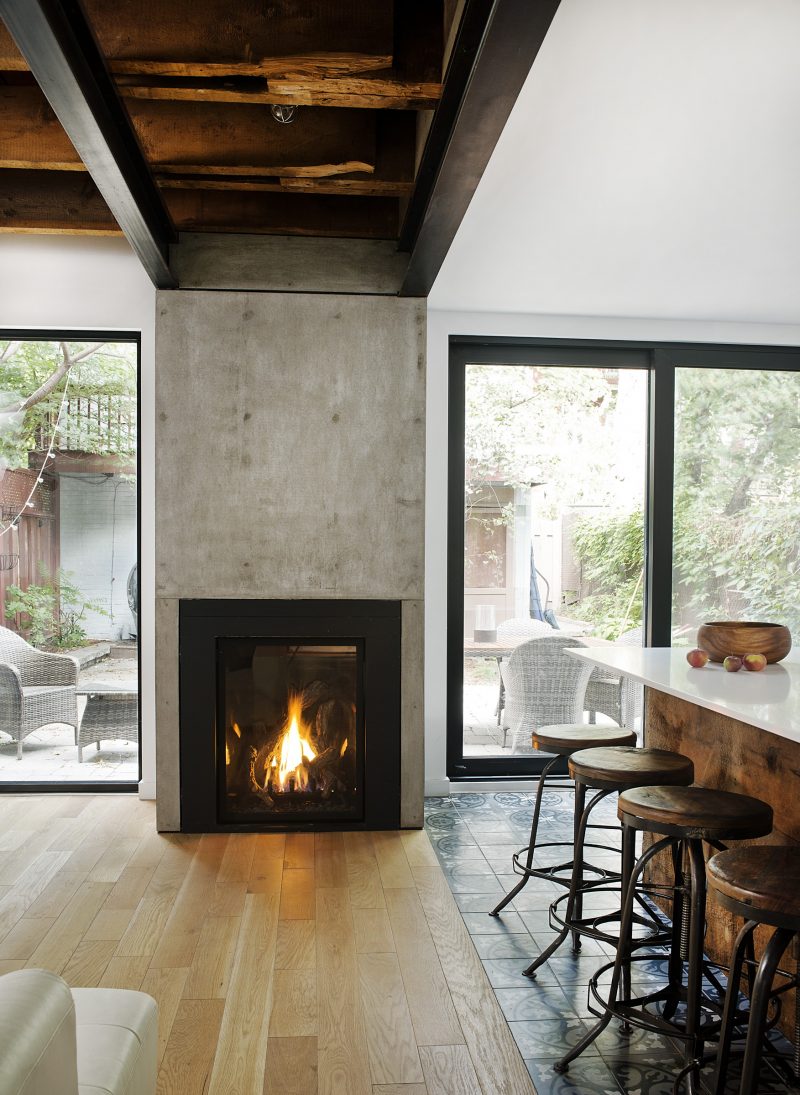 Exposed steel beams also contribute to the look, but, Tremblay says, although their use was inspired by the original structure, the dark H-beam pieces are all new.

Wood that was stripped from the building was repurposed throughout the new house, which includes about 1,700 square feet of space on two levels. Aged planks cover the front of the island in the kitchen, offering a contrast with the sleek white quartz countertops.

The wood from the original structure was also used to custom-build the rustic sliding barn-style doors that access the powder room and pantry. These doors save space in a tight area by eliminating the need for an area to swing open. A shelf-style vanity in the powder room was fashioned from an old beam.

The use of concrete throughout the main floor also contributes to the industrial-rustic theme.

“The old and the new is what gives it the unique cachet,” Tremblay says. And the blend of materials, such as the concrete column that houses the gas fireplace, gives it warmth. 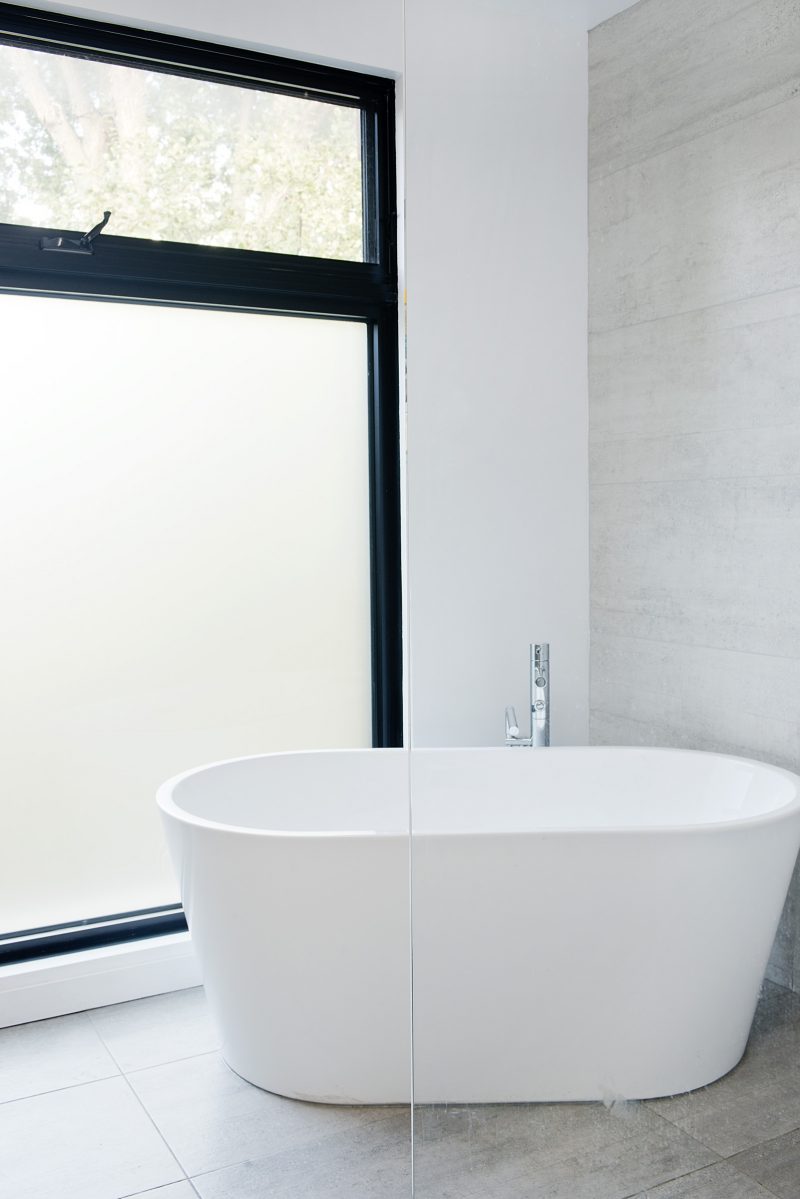 “I like that there is warmth and history,” Le Dot says. “We adore our house.”

It is a home that was designed with the couple’s vision of not only how it would look, but also how they envisioned living their lives.

“It’s a house in our vision,” Le Dot says. “When we open the door, people are stunned.” The contemporary design indoors has totally transformed this older building, which is not apparent from the street. But the style of the interior has ensured that the building’s history is still part of the narrative.

Happy To Be Home