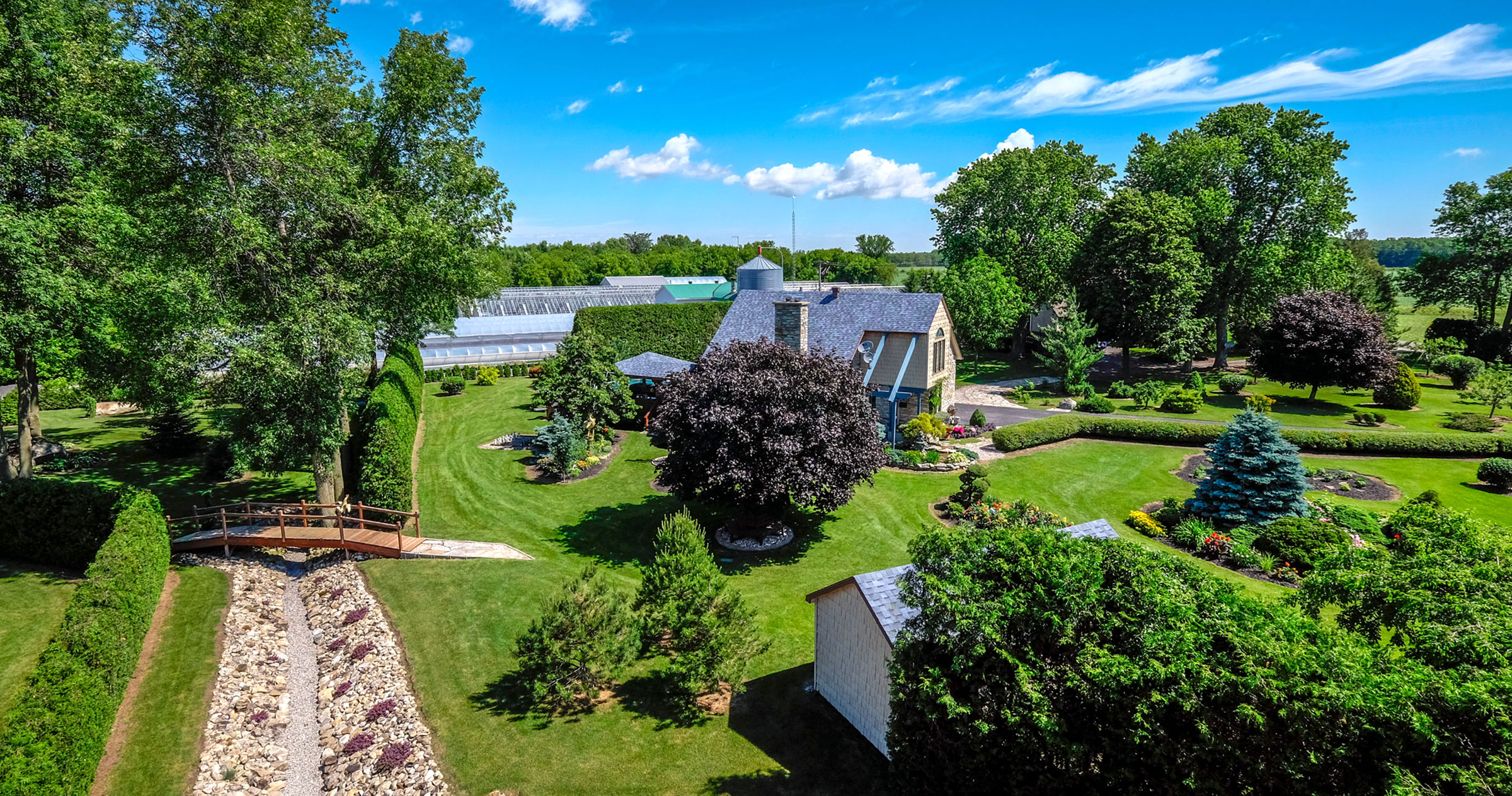 There is a popular misconception that people who make a living cultivating plants for the horticulture market have neither the inclination nor the energy to create gardens for themselves. If there is any truth to this, it certainly hasn’t reached Debbie Garrick and Henryk Maedler-Kron.

The couple own Les Serres Maedler, a thriving horticulture business that supplies annual, perennial and tropical plants for wholesale and for their own retail stall at the Atwater Market. Despite the many hours they spend growing plants in their greenhouses in Noyan, Quebec, 70 kilometres south of Montreal, they always make time to cultivate their own gardens.

The business, which encompasses several industrial-sized greenhouses, sits on 50 acres, as does their home, about five kilometres from the Canada-US border at Lacolle.

Debbie has been tending and expanding the three acres of gardens for the past 17 years. “At that time, there were only three trees here,” she says, while standing in an area she calls an arboretum. “There was really nothing else.”

What a difference a couple of decades has made. The arboretum now is populated with a variety of specimens, including pear, apple and cherry trees. And in one area, Debbie planted a grouping of pines. “I like to stand in the middle of them while the wind is blowing,” she says. “The pines make a lovely, whistling sound that reminds me of my youth.”

Debbie grew up on a dairy farm in the Eastern Townships. “It instilled in me a knowledge of how to live off the land,” she says. “When you live on a farm, you live off the land. When I was young, we harvested the food to make jams and pickles at the end of the growing season. I still bake a lot.”

She uses the bounty from a berry garden that she created near the arboretum. “I grow blackberries, blueberries, haskap berries, strawberries and goji berries,” Debbie says. “I freeze them and eat them with yogurt during the winter months.”

The winter is the couple’s busiest time of year. The large greenhouses on the property are used to cultivate a vast variety of plants that are sold to nurseries during the gardening season, says Henryk. That season goes full-tilt between May and July, after which time the couple can turn their attention back to their own gardens.

Henryk credits Debbie with the creation, maintenance and evolution of the landscape. “The gardens are truly Debbie’s sole creation and she maintains and expands them 99 per cent on her own,” he says. “She does all the planting, transplanting, moving, pruning, hedge-trimming, staking, mowing, weed-whacking, fertilizing, watering, winterizing and so much more. It is truly the work of one woman – super-woman actually – because normally you would need a full-time gardener to do what she does out there while still working in the greenhouse and house.”

The sweeping landscape offers Debbie plenty of space to cultivate both ornamentals and food. On the periphery of the arboretum, Henryk created a pergola under which heavily mulched tomatoes are cultivated. They grow up vertical strings toward the sun. And nearby, rhubarb covers a chunk of ground with its ample foliage.

Comfortable with cultivating tender plants, Debbie created a flowerbed near the house, filled with blooms that are native to the tropics. Here, dracaena, cannas and hibiscus share space with aromatic Stargazer lilies and amaranth. “Some of these plants attract hummingbirds,” she says.

Nearby, an herb garden is shaped like a three-leaf clover “because I’m Irish,” she adds.

While Debbie and Henryk are prepared to give their plants plenty of special care to help them thrive, those that don’t do well in their microclimate are eliminated from the garden and replaced.

Throughout the landscape, there are spots in which strategically placed seating encourages repose. Under a linden tree, a stone bench offers the weary an opportunity to stop and take in the surroundings.

And there are whimsical installations, an example of which is a giant concrete chessboard embedded in the ground, which Henryk created 12 years ago. Fifteen-inch-tall chess figures stand atop its squares, ready for play.

The shaping of the landscape has evolved over the years. Once a farm, the land had a drainage ditch around its periphery. “It was always dry in the summer, but in the spring, it would fill with water from the snow run-off,” says Henryk.  The couple decided to transform it into a water element. By hand, the two hauled thousands of stones and placed them in what would become a little riverbed. Then they installed a recirculating waterfall that feeds the ditch-come-stream.

By far, the best-kept secret in this landscape is the secret garden, an area enclosed on two sides by 12-foot-tall cedar hedges. Before Henryk had the space cleared of brush though, he received an unexpected visit. “An elderly man in his 90s came by the house and asked if he could see the rock,” he says.

“The rock,” it turned out, was actually a boulder in the centre of what would later become the secret garden. “It was all concealed under brush,” Henryk continues. “We pulled away the weeds and saw the boulder that this man remembered from having lived here as a child.”

Now exposed, the rock stands about four feet tall and “you can lie on top of it to stare at the stars,” says Debbie.

That visit from the elderly man also solved a mystery. Henryk says he often wondered why there was water in the basement of their house during the spring melt. “The old man told us that we had built our new house over a well that his family had taken water from,” he says.

The garden continues to evolve every year. “I look at something and visualize what needs to be there,” Debbie says. The pergola over the back deck is a case in point. “I planted grapes to cover it.”

Everything seems to grow so happily in this landscape. Then again, cultivating beautiful plants comes naturally to Debbie and Henryk. •