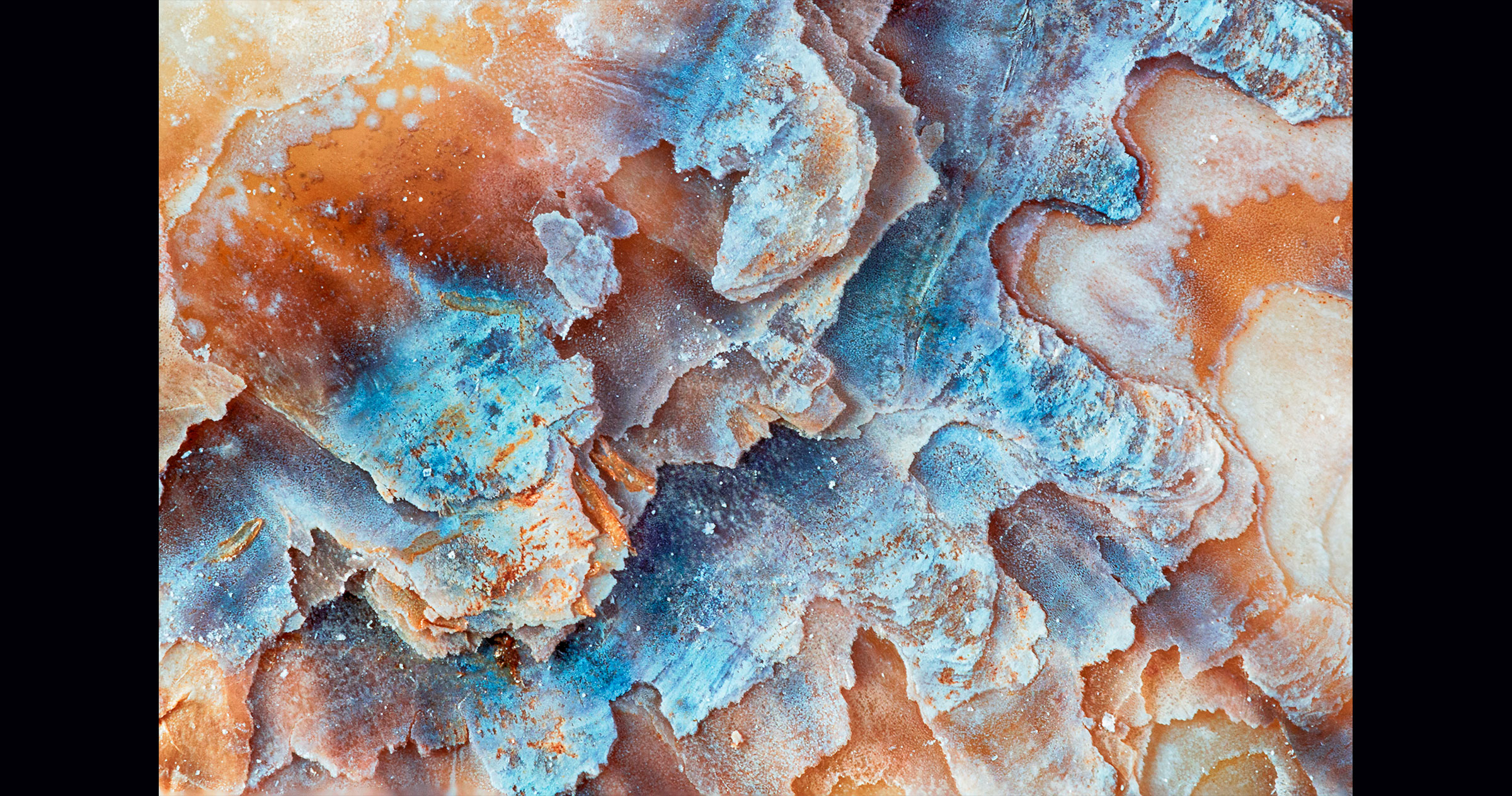 Debbie Brady is passionate about oysters. It’s not their taste or texture—in fact, she never eats them. It’s the beauty she finds in their shells: the lines, unexpected shadows and shades of colour that are invisible until she searches out and exposes them in her photography.

Living on the Oyster Coast in Prince Edward Island, and armed with a new macro camera lens, Brady decided it was only natural that as she explored the up-close intricacies of the world around her, she would turn her eye to the shells on nearby beaches. “If I can get to the shore, it’s my happy place,” she says. “I looked at weathered oyster shells; it was so exciting. They had this beautiful texture.” Other subjects came and went, but her fascination with oyster shells kept growing.

Each of her works magnifies a tiny portion of the shell—sometimes no more than a quarter-inch section—until it is unrecognizable as a mollusk. Instead, it resembles much larger views: seascapes or views of space. “It looks like a galaxy or a satellite view of the earth,” Brady says of much of her work. “The smallest of things and the largest of things come full circle in an oyster shell.”

Now 66, Brady realized she wanted a life in the arts during her third year as a nursing student at Dalhousie University in Halifax. “I met somebody creating art and thought ‘Oh my goodness, I’m doing the wrong thing,’ ” she recalls.

Not wanting to abandon her program so close to the end, she stuck with nursing, graduated, and then spent years as a stay-at-home mother raising four boys in Tyne Valley, P.E.I., surrounded by an apple orchard. When her youngest child started junior high school, Brady began commuting to Charlottetown to study graphic design at Holland College. “I wasn’t sure what that was,” she admits, but it sounded as though it had some connection to art, so off she went. She spent the next two decades running a graphic design business out of her home. Then, after having directed her share of photo shoots as part of her business, she decided that her place was behind the camera, not beside it.

She bought a DSLR camera and a macro lens, and confesses that for a while, she didn’t dare switch it out of the “auto” setting. She read manuals and photography books, but the basic concepts of changing f-stops and shutter speeds remained a mystery, until one day, when she was at a photography workshop and it all suddenly clicked.

Her work is more than simple images that are photographed and enlarged. At high levels of magnification, only a fraction of each image is in focus, which can require as many as 72 individual images, taken 0.3 millimetres apart, digitally assembled into one, to create an in-focus composite of that one tiny portion of the shell.

To find the images she wants to photograph, she uses her camera lens to scan the entire surface of each shell she collects, looking for the right view. She describes how she found the section of shell she photographed for the artwork she calls Enchanted, which has a fairy-tale-like feel. “I was scanning part of it, having a cup of tea and going through a collection of shells, saying, ‘That’s no good; this has potential.’ As I got to the end of it and I came to a halt, all of a sudden, things just made sense visually,” she says.

Each piece Brady sells is accompanied by a photo of the original shell, information about where it was sourced, and a highlight marking the section that she photographed.

The more she studied oysters visually, the more curious she grew about these creatures, and visited aqua farmers for what one called her “oysters 101 lesson.” She even went out on a fishing boat “tonging”: harvesting wild oysters with tools that look like long-handled rakes.

Brady, an award-winning accredited member of Professional Photographers of Canada, says the support she received early on from people involved in the oyster industry and art community helped to reinforce the feeling that she was on the right track. She says she loves getting feedback from clients and visitors to her home gallery. One comment left by a visitor seemed very apt and has stayed with her: “It’s humbling to get a glimpse of an unseen world that was always in plain view.” •

Debbie Brady’s photographs can be seen at www.oysterart.ca