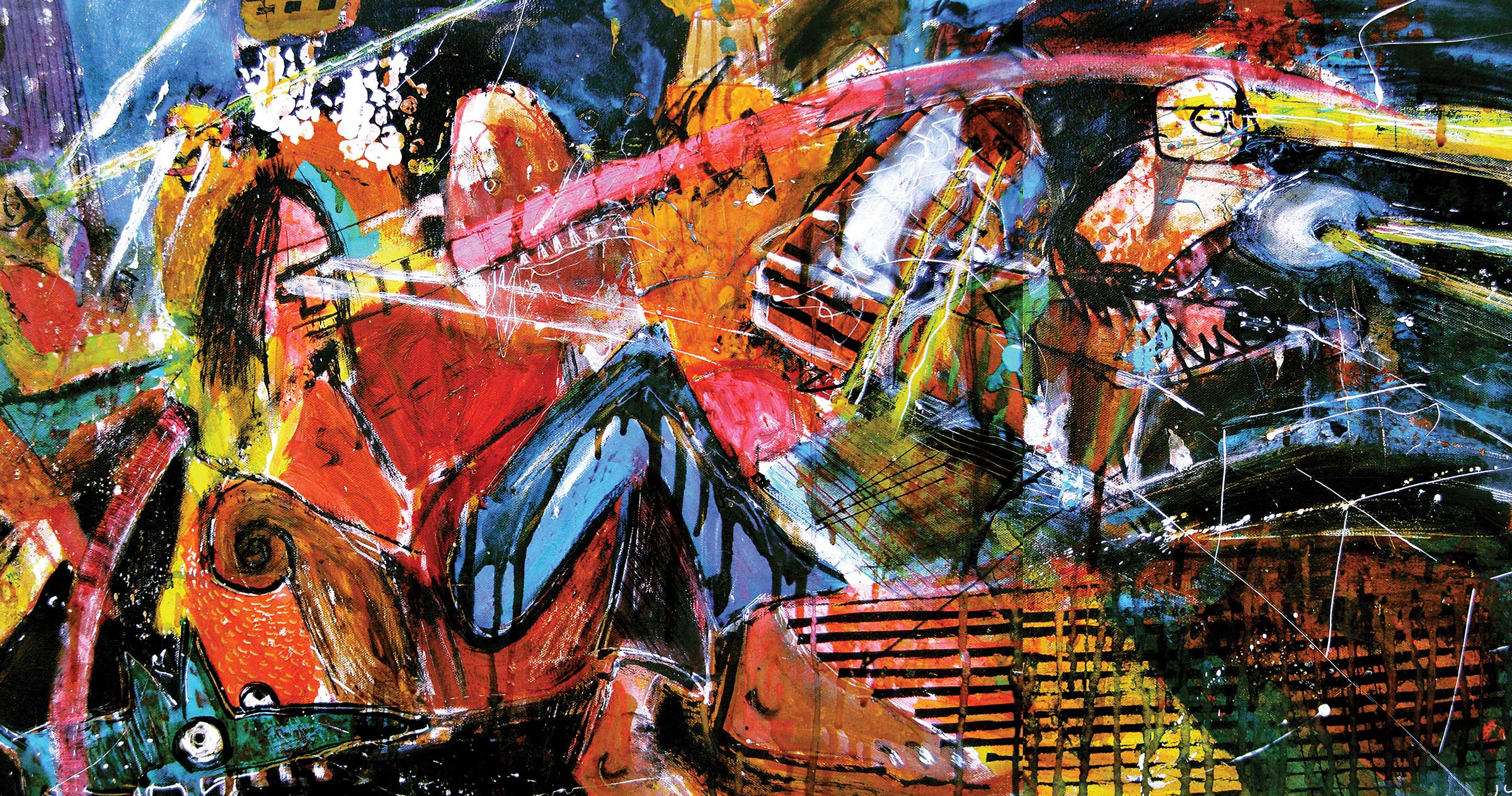 “Eddie hides his face under a jokeshop (sic) mask.” Victoria artist Lyle Schultz says that lyric snippet from a song by Canadian skate-punk band SNFU about sums up his approach to life and art. “I tend to hide behind a sense of cartoon facade in most of my work,” he says. “It’s still me, but just hidden deep under many layers of paint.”

A full-time painter for a decade, at age 39 Schultz has created a serious body of work. Unique, often absurd or provoking, yet somehow profound, his style is sometimes compared to American neo-expressionist painter Jean-Michel Basquiat. Schultz’s paintings have been shown in close to 100 exhibitions nationally, about three-quarters of them on Vancouver Island. His works can also be found in many private collections, including those of Kids in the Hall alumnus Scott Thompson and John Wright of the band Nomeansno.

Cartooning dates to Schultz’s teenage years in 1990s Saskatchewan. He and a friend produced Phoxx Hat, a ’zine filled with “poetry, drawings and insanity.” With other artists who were part of the same film group in college, he received a Canada Council grant to make an animated film: Hello, My Name is B.O.B., a project that took him to the West Coast. The group subsequently fell apart, but Schultz remained on Vancouver Island in 2003.

The culture of the 1990s –  from Terry Gilliam to Sam Kieth comics to filmmaker David Lynch – remains a big influence on his life. But it’s the decade’s underground-alternative and punk musicians, the “intelligent, creative, in-your-face bands that had amazing musicianship and art,” that inspire him the most. He has created album covers for such bands as U.S. punk rockers Lucky Scars over the years.

And he counts SNFU musician and artist Ken Chinn, who uses the pseudonym Mr. Chi Pig, as friend and mentor. Schultz says it was backstage after a concert when he first saw one of Chinn’s paintings, which spoke to him as nothing had previously. “He also taught me that if you don’t have passion for what you’re doing, no one will care about what you produce, either,” says Schultz.

He has a strong support system of friends, and is grateful to his parents who have always been strongly in his corner.

Most of Schultz’s paintings have “at least 10 paintings under them,” as he tends to revise feverishly and relentlessly until he gets it right. He works on canvases or panels that range in size from four inches square to six-by-12-feet. He prefers acrylic paints with the occasional mix of other media. Because he prefers to work insulated from natural light, his studio is in a converted sauna at the back of his home.

The rest of his apartment is jammed with paintings, books and guitars. To find space to sketch out his ideas, he tapes huge sheets of paper to the walls. That way, he can record his ideas for the many media he works in, including animation, short film, and writing.  He also has scattered six video monitors that continually run, usually showing his favourite classic films, such as David Cronenberg’s Naked Lunch or sci-fi classic THX 1138.

Among the projects in the works now is a mixed-media animation with musician Edward Garbo for a song that’s set for release in 2018. And he’s launched a line of leggings, skirts and bags under his own label, Stitch Cricket. They’re entirely made in Quebec, from the performance fabric to stitching. “And I don’t just transfer a painting onto the fabric,” he says. “I design each item, so each becomes wearable art. And some are limited editions.” The clothing and accessories are available only at stitchcricketclothing.com. Schultz also sells his paintings mainly online as well, at lyleschultzart.com and on his Instagram site: @lyleschultzart.

His most popular works feature cartoonish dogs in often surreal landscapes. It’s again an outsider’s view of the world around him. For in a town where “everyone and his dog has a dog,” Schultz remains a devout cat person. “I am happy people like something I do, but don’t want these paintings to be all I do,” he says. •

Artist Chantal Malek is a purveyor of colour and emotion. It’s impossible to look at a Malek canvas and not...

From Garbage to Gorgeous