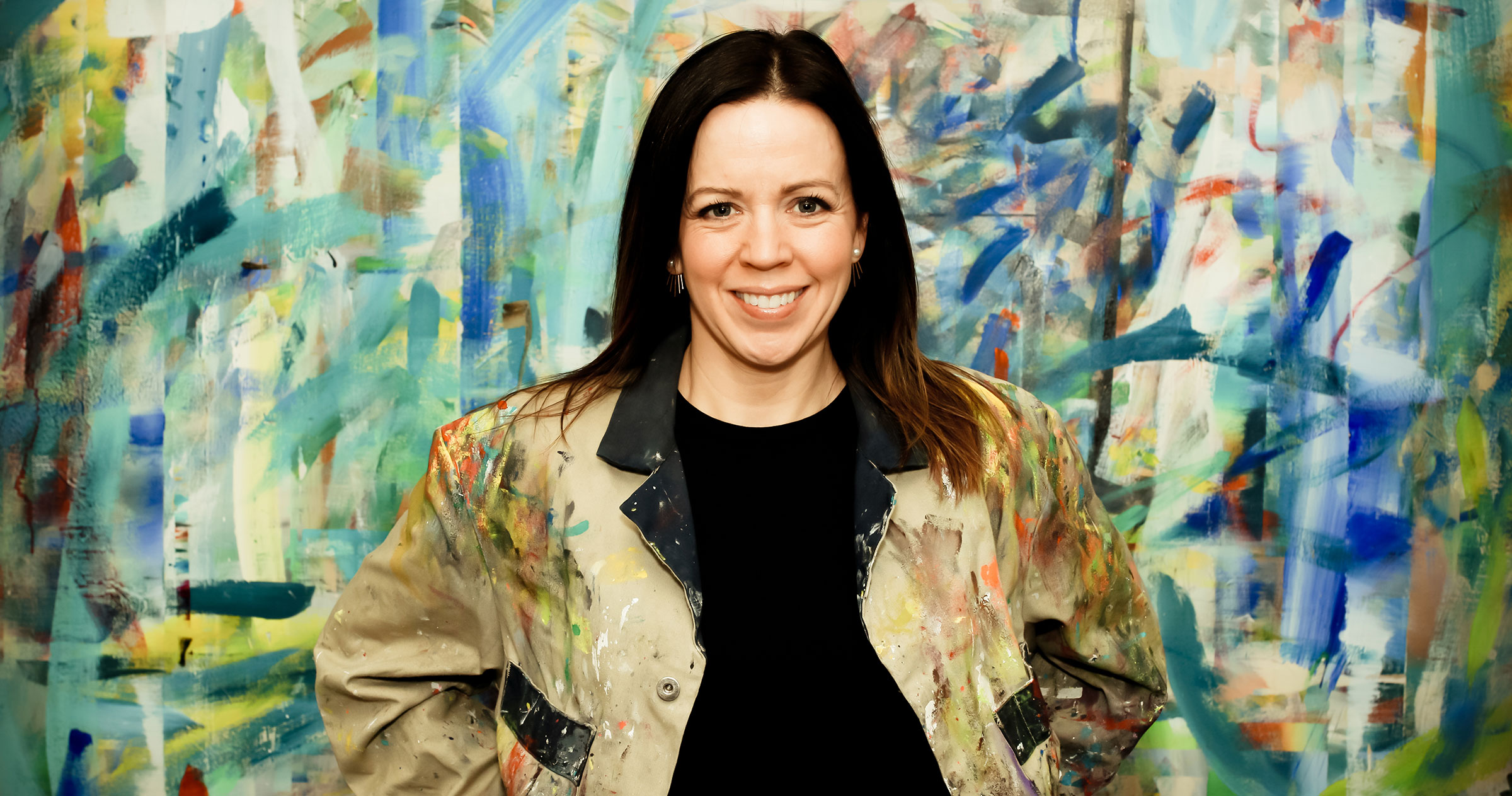 A Quebec artist creates unique folded canvases that are three-dimensional

During the years when Mélanie Giguère worked as a fashion designer, it was her fine-arts background that inspired her colours, shapes and style. Now, as a full-time painter, it’s her history with fashion that shapes her paintings: folded canvases that play with light and colour.

Giguère started out studying art in Quebec City, but when she graduated, she thought it was time to put her artistic dreams aside, to grow up and find a real career, one that would pay the rent and support her. She enrolled in a fashion course, and then spent the next decade working as a designer at Simons. And in her free time, she painted. She painted until she knew that it was the only thing she really wanted to do.

As her style developed, she tried to translate some of the feeling of working with fabrics into a language she could use on the canvas. “I was looking to create the same volume that I had in working with clothing, a 3-D effect,” she says. “Even when I tried different texture techniques, I was never satisfied. It wasn’t what I had in my head.” Then she hit on the idea of manipulating the actual canvas: painting it and then folding it to create the volume and lines she wanted before she put it on its wooden frame.

It’s a technique she’s dubbed “foldart” – literally, “folding your art.” She creates her lines and paints the loose canvas, then folds it before putting it on its wooden frame. Then, because the paint will crack or get marred during the framing, she paints it again. “Sometimes, I have to correct the colours because it becomes unbalanced, or a line I had in my head was straight and in the folding it’s become crooked,” Giguère says. Because the folding reduces the size, she starts with canvas pieces that are three or four times larger than her finished piece will be. The result – contemporary-style sculptural paintings, or maybe painted sculptures.

For years, Giguère painted with saturated colours, lots of bright blues, reds, greens, yellows, mostly on white backgrounds. “My kids adore my canvasses that are very coloured,” she says. “I always loved colours, even while I was studying, while I was designing clothes. I was always trying to come up with new colour stories, to mix new colours. Colours are at the centre of my artistic process.”

The artist says that many of her colour choices have been inspired by her travels. A recent ski trip to western Canada, with its white mountains and intense blue skies led her to do a number of works in just those white and blue tones.

“Now I’ve started making canvases that are all white, like a vision of eternity. They’re very airy,” she says. “I secretly always wanted to have the guts to do a white canvas. My kids thought that made no sense: ‘Mom, you can’t do a canvas with no colour.’ ” Then a client commissioned one. “I was so happy. That gave me the push I needed to make more.”

In the past year, she’s has been using more white, grey, beige. “It’s really the texture that you see. It all changes depending on where the light comes from. The 3-D effect is most visible on canvases that are white.

Another direction she’s looking at is swapping her canvas for other fabric, possibly linen or even velour. “It’s a technique that opens many possibilities for the future,” Giguère says. “A lot of people say, ‘You’re lucky to be a (paid) artist.’ It didn’t just happen.” When she realized there were other artists with successful careers, she knew that if she worked hard and if she distinguished herself and her work stood out, she could earn a living as an artist.  It’s a message she’d pass along to young artists who find themselves in the same position she was in. “Life is too short to waste time working in a field you don’t like. I’d tell them to stay connected to themselves, be open to critiques, to always try to evolve and learn. That’s the key,” she says. “I’d say, yes, it’s possible to live on art.” •

Mélanie Giguère is represented by Galerie Le Bourget, 34 St. Paul St. W., Suite B, Montreal514-845-2525. Her work can be viewed at:
www.galerielebourget.com
www.melaniegiguere.ca