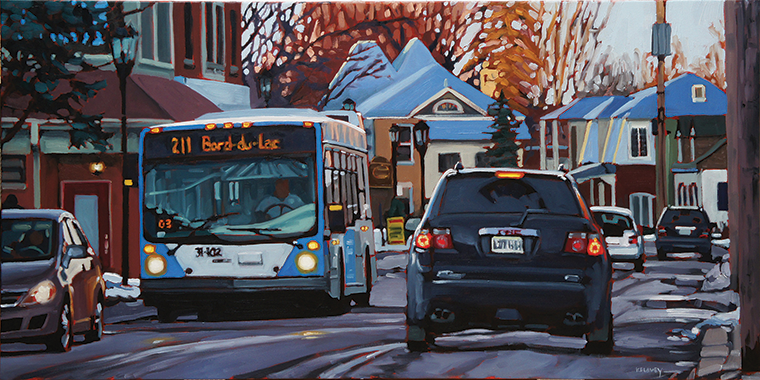 Artist David Kelavey captures the essence of Montreal and environs

A snapshot in oils.

Some of us know from day one what we are meant to be; others take time finding out. David Kelavey didn’t pursue his passion until he was in his thirties. But since then, the Beaconsfield artist has made up for lost time with a prodigious output. 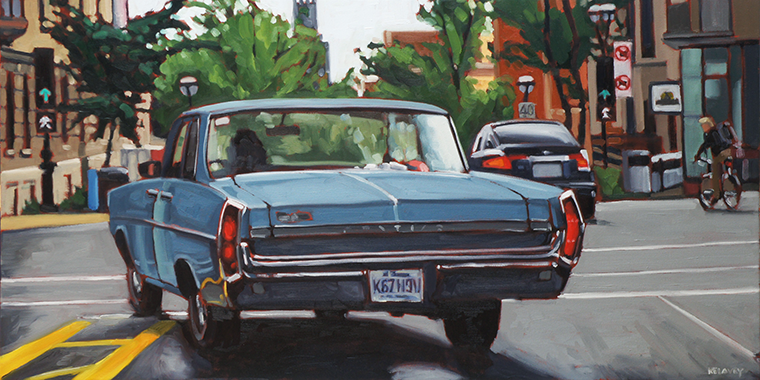 “I was 31 or 32 before I really started painting,” says the 47-year-old Kelavey, who has a regular day job as an IT (information technology) business analyst.
He paints in the evenings when his young children are in bed. “I have a very understanding wife,” he says.

About four years ago, Kelavey decided that “it was going somewhere, and then I called myself an artist – an artist by night.It was only in my forties that I decided to start taking it seriously,” he says.

But, like many cases of seemingly newfound passion, the artist’s story began when he was much younger. Kelavey was born in England in a small Yorkshire town, and grew up in the Manchester area. “Somewhere in the back of my mind, I always knew I’d have a go at painting,” he says. “I felt I had a certain leaning towards it.” He even spent his gap year at art school. The nascent artist, however, “knew the priorities, that making art for a living is working very hard.” 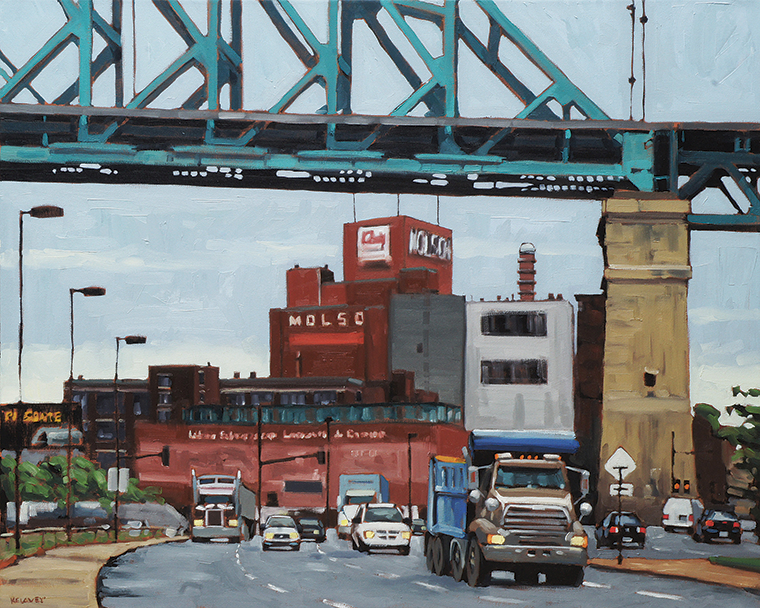 Heobtained a university degree in business and engineering. While in the UK, he was hired by a Canadian company and came here for training in 1997. It was an auspicious move. “It was only after I settled in Montreal that I felt grounded and had time to try [art] out,” he says.

Kelavey first felt like a “real” artist when he received the recognition of his peers, not just with awards but also with acceptance into such juried groups as the Lakeshore Association of Artists, the Society of Canadian Artists, and the Oil Painters of America.

He says that he always wanted to capture Montreal in paint, but believed it would take some time before he could do the city justice and be proud of his work. He took courses and workshops, and made a point of talking with other artists. “I talk to people I look up to, ask for advice and critiques,” he says. “That’s the only way to develop. Nobody works in a vacuum.” 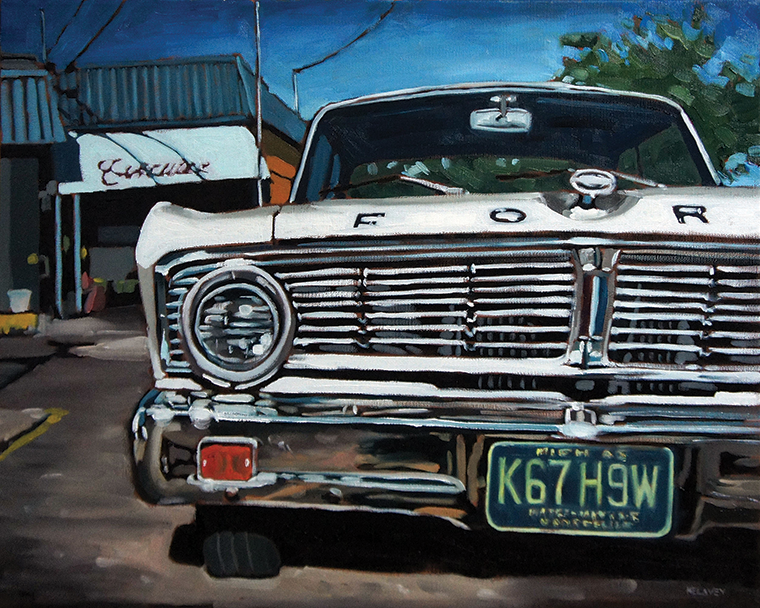 It was artist Scott Addis who gave him a life-changing piece of advice: paint a large number of small paintings in a short period of time. Kelavey did 50 eight-by-10-inch paintings in 95 days. “It completely transformed my style and confidence,” he says. “When you’re painting on a small scale you’re making the same decisions as painting on a large scale. Composition, colour, values, all of that – you have to make those decisions. The only thing that’s different is the amount of paint you have to put down; that’s why it’s perfect.

“That was so transformative that I did it again. I did 50 paintings, smaller paintings this time – we’re talking five-by-seven – in 77 days. I introduced more challenges by limiting the palette; I’d use only four or five tubes of paint. I also limited the time; I had to be done in 45 minutes, each painting. I’d get up at five in the morning and, by the time everybody was having breakfast, I’d already done a painting.

“I think the evolution has come through pure mileage of just getting paint on canvas. I think my observation skills have tagged along. I think I have keener observation. I’m very inspired from the visual point of view. I don’t see any deep messages in what I paint, although some people do. It’s more of a visual exploration.” 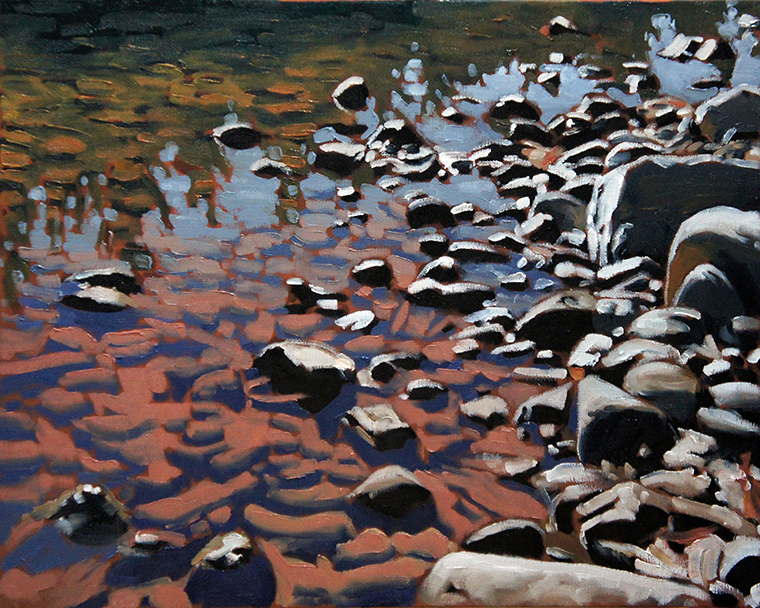 Kelavey paints primarily from photographs, first others’ (with permission) but now exclusively his own. He takes many photos from his car while idling at stoplights, for instance.“I love the energy of cityscapes,” he says. “I like to capture my environment in a contemporary way, and I want people to recognize streets they see in my paintings.” As for the cars that populate so many of his urban scenes? “I just never grew up. I like shiny muscle cars,” he says.

Kelavey’s street scenes tendto be underpopulated; he has viewed people as part of the landscape, but “people are becoming more and more prominent in my work.”

Landscapes, especially wintry ones, are also a common theme. “I love the outdoors, and going hiking and cross-country skiing,” Kelavey says. “Winters here are fantastic. There’s a certain quality to the light: crisp, bright, clear, timeless.”

He was particularly influenced by Tom Thomson and by the Group of Seven, especially Lawren Harris. He says that Harris et al captured their environment in a more realistic way, with less romanticism (“warts and all”) than previous painters. At the National Gallery he saw an exhibition of quick studies by Thomson that “were just amazing, full of energy, confidence, contrast, bold colours. He captured the essence of Algonquin Park; he didn’t feel the need to cover the entire surface.”

Kelavey likewise captures the essence of his subjects rather than exact details. From a distance, a painting seems complete, filled in, but up close “you have to interpret it because I leave gaps. I leave things out. The viewer has to tie them together. I appreciate technically skilled work, but it doesn’t leave a huge amount up to the viewer. I want the viewer to be more active, to get people thinking,” he says.

Although he used to work in acrylics, he was curious about oils and took some classes with Craig Skinner. He discovered that oils “were extremely forgiving; you can scrape them off. Oil paints have a beautiful consistency to them, like soft butter.” 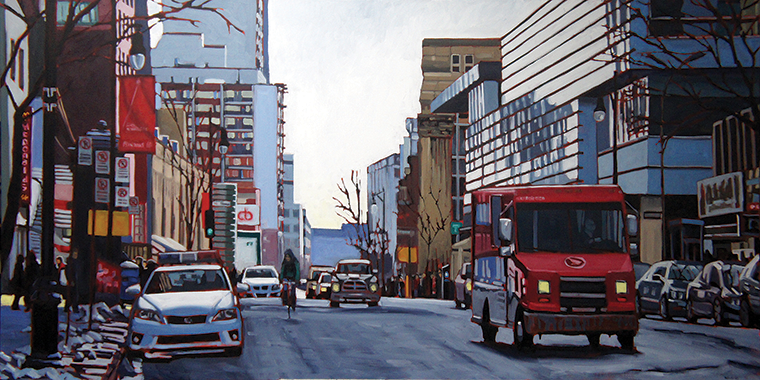 He now works almost exclusively in oils, alla prima – applying layers of wet paint over earlier layers that are still wet. The technique requires fast work. He usually lays down a base of burnt sienna over the entire canvas, then works in colours from dark to light, but he often leaves bits of orange underpainting “peeping out from under my work; it gives warmth to winter scenes.”

Kelavey continues to explore other techniques and recently took a drawing class with Eric Mannella. Detail and accuracy were everything in that class, he says, adding that “in absolute stark contrast to my paintings, a drawing would take hours and hours, but the results were satisfying, therapeutic. I take from that class [an appreciation of] accuracy and the ability to see. Now I’d like to take my newfound skills and see what I can do.”

While he explores those newfound skills, Kelavey is still busy with commissioned and independent work. He’s currently producing a series of paintings for the recently opened Bistro de Pointe-Claire.

He is represented by the Viva Vida Art Gallery in Pointe-Claire Village. “They have been tremendous in supporting my career,” he says.

Kelavey is equally generous in thanks to others who have guided him. “Also instrumental in my career was Helmut Langeder,” he says. “I took a course of his, and he has given me advice. There’s a host of other people I’ve pestered, too. I didn’t come by this stuff all on my own.