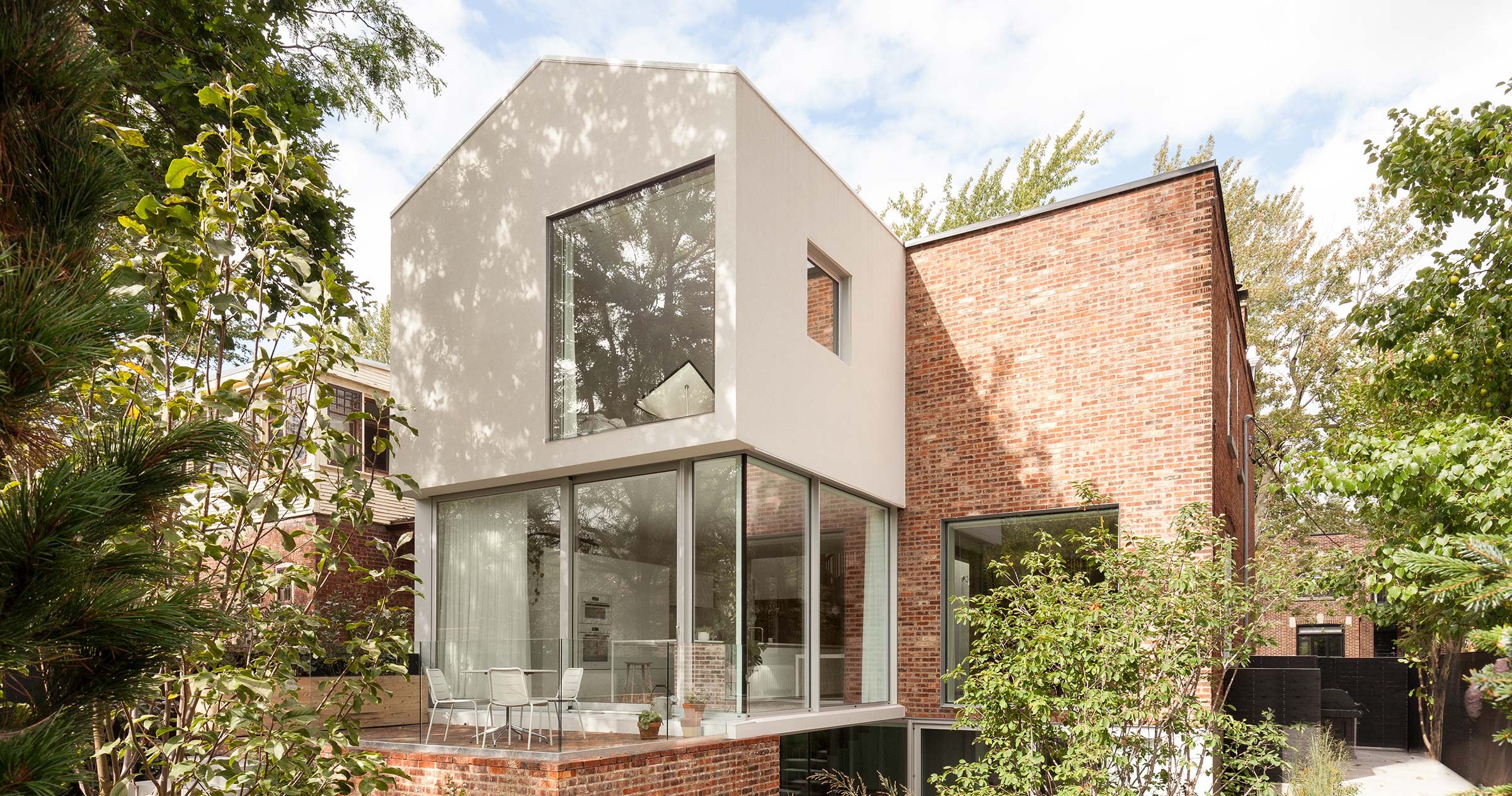 The century-old semi-detached house in Montreal’s Notre Dame de Grace neighbourhood was solid and comfortable. But the interiors were a warren of small, dark rooms when the homeowners approached the architects at la SHED Architecture about reimagining it. The couple wanted more natural light and a sense of expansiveness for themselves and their three children, all young adults.

“They have many memories in this house,” says architect Sébastien Parent, of the la SHED team. “They wanted to preserve the spirit of their home, but they also wanted change.”

Change is what they got, in the form of glass walls and railings, contemporary red oak flooring and staircases to match the original walls and floors, custom-designed bathroom fixtures, and a massive, light-filled kitchen that delights the family and visitors. It was a major job, says Parent, whose Montreal-based firm has award-winning expertise in the transformation of the city’s older row houses and duplexes. “When the house was finished, they saw that it was another house, but it had integrated the original elements of the period,” he says.

It began with the fine woodwork, which was restored by hand and, whenever possible, repurposed in another space. The “masterpiece” of the house, the Arts and Crafts staircase with its fine bannister details and solid columns, floats onto the main floor and is mirrored in the simple red-oak risers leading to the lower floor. Custom-made glass partitions allow the staircase to be viewed from the home’s new section, while thick slatted flooring, also in red oak, marks the entry and invites light into the upper and lower floors.

The floating staircase connects the elements, which include simple oak moldings around the doors as well as the large window at the end of the dining room. The room’s impressive panelling was carefully restored, and the window was installed to give the impression that there is no frame. “We wanted to give a contemporary intervention here,” Parent says, “at the same time offering texture, like the original elements of the house.”

The colour palette also combines old and new, including Carrara marble flooring adjacent to red oak, and soft whites throughout. A small bathroom exemplifies the connection; here a contemporary sink and tiled walls contrast with a red-oak linen closet, moved from another floor of the home.

The extra-large kitchen is put to good use by the homeowner, who is an expert cook and often entertains. No handles are visible on the minimalist cabinetry, designed by la SHED in wood overlaid with aluminum. A Corian countertop extends into a large, sleek table.

A central hub of the house, the kitchen features floors in hexagonal Carrara marble tiles, like those in the entryway. It offers great views of the back-courtyard garden.

Bathroom fixtures were also designed by la SHED, which created a trademark large window. It gives new meaning to the expression “bathed in light.”

“That is actually a window in the large bedroom beside that bathroom, so if the sliding door between the rooms is closed, there’s no view from the bathroom to the exterior,” Parent says. “If it’s open, then the light comes in, lots of light.”

The staircase to the basement, painted wood with red oak steps and risers, opens into another expansive space, with under-heated concrete floors and a small piazza for viewing the back garden. The homeowner wanted to use the basement as a place for games and fun, Parent says, so it includes a pool table and television. “We wanted to give the impression of another complete floor of the house,” he says. A small soaking pool just outside the tall glass doors is a magical place, offering a basin for quiet reflection.

In the backyard, the architects optimized the sensation of a lot of greenery, the design bringing to mind an English courtyard with soft plantings punctuated by limestone stairs, and a walkway in red cedar to recall the grid patterns in the house.

Covering the new sections of the house in pale stucco brought a textured element to the structure. It accentuates the contrast between old and new while linking the two with a terrace and walls that incorporate original bricks from the back of the house. In the front, the original brick facade was cleaned and the original doors, windows and balcony were restored.

All of the custom-made pieces, fixtures, woodwork and furniture were designed carefully to complement the aspects of the home that were conserved, Parent says. “The beauty of this project is the uniformity of material.” Their vision was also appreciated by the architectural community: in 2017, the home received an award from the Order of Architects of Quebec; in 2018, it won the Grand Prix du Design from a jury “charmed by the elegance of the design and its great respect to heritage and value.” •