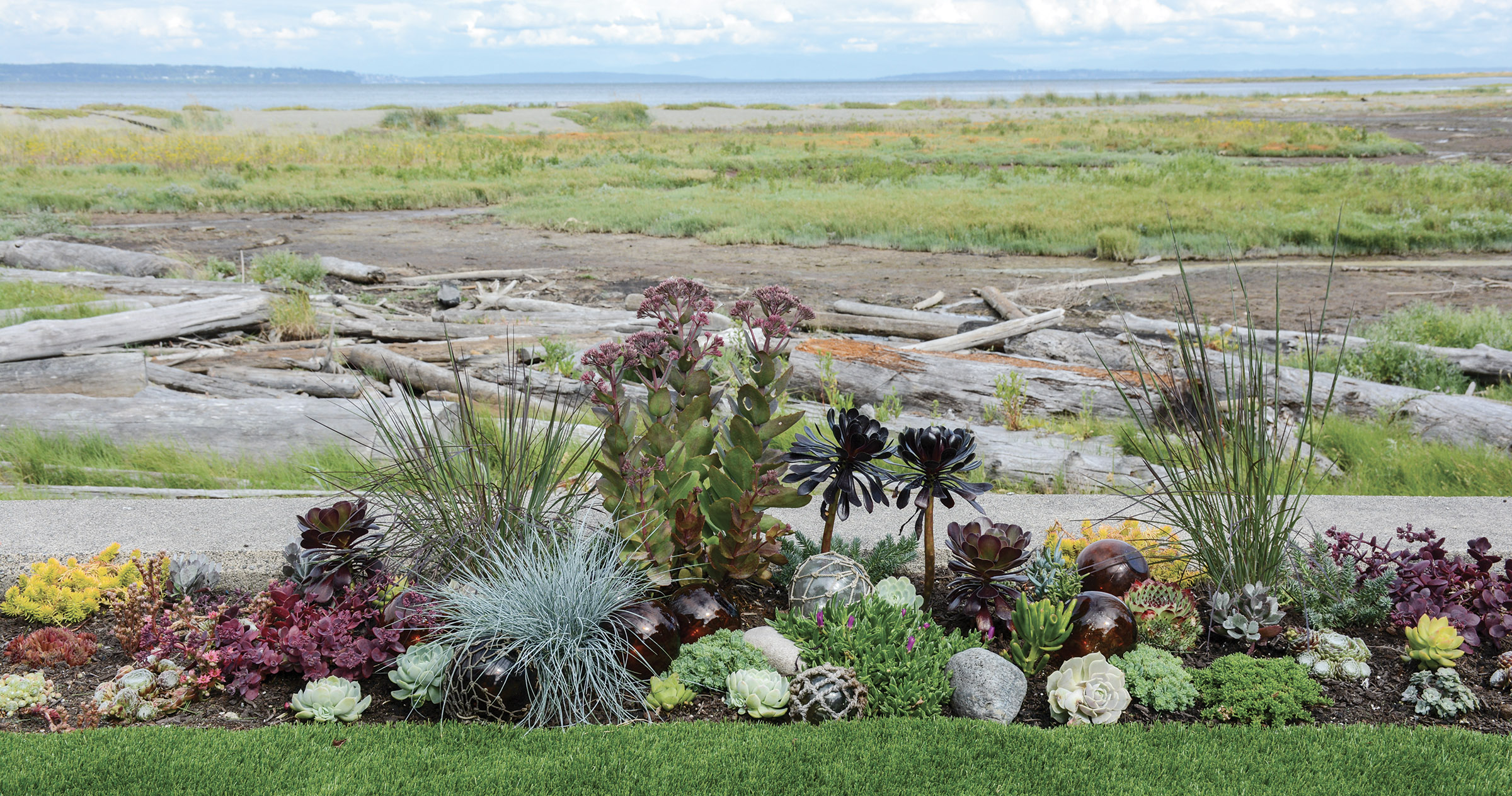 Serenity By The Sea

Debbie Samsom wasn’t sure what kind of garden she wanted around her beachfront home in Delta, but she wanted it to blend in with the adjacent natural landscape. So in her mind, any new plants, paths and patios would have to accentuate – not impede – the clear view from her kitchen window out onto Boundary Bay.

Today, one year on, Debbie couldn’t be more pleased with how her new garden is blooming – and just as important, how it makes her feel. With newly planted beds of mixed ornamental grasses, exotic-looking succulents and a variety of perennials – none of them taller than three-and-a-half feet, there’s an unimpeded view from her house straight over the beach and bay and, behind that, looking to the southeast, Washington state’s Mount Baker. Her new happy place is the crushed-stone patio at the far corner of the property, right next to a ladder that goes down to the public beach below.

“I have a hard time getting any work done now,” says Debbie, whose second-floor home office overlooks it all. “About 80 per cent of the plants are perennial, so this garden looks good all winter long. Even my planters and containers that were filled with succulents overwintered nicely. I love how everything flows right into the beach.”

When Debbie and her husband John moved into the 2,800-square-foot contemporary home two years ago, the back garden was in sorry shape.

“We had the reflection pool, but the lawn was in poor shape; voles and raccoons had destroyed it,” Debbie recalls. “There was a row of wild roses along the property line in a narrow border, but that was it.”

She wanted a garden makeover but didn’t know where to start. Up to that point, her tastes and experience had been limited to English-cottage-garden designs with hydrangeas, wisteria and rhododendrons.

“We had a blank slate,” says Glenna Partridge, the garden designer who  reimagined the space for the couple. She says the idea of planting mainly succulents was sparked by the fact that the homeowner loved them and had planted some in containers and planters during her first year in the house. They had done well, surviving right through the winter. “That gave me a clue there might be a microclimate,” says Partridge, owner of Glenna Partridge Garden Design.

Using succulents as a starting point, Partridge designed low-maintenance beds, choosing hardy plant varieties that require little dead-heading and don’t demand a lot of water. The lawn was scaled back to one-third of the yard and the grass was replaced with artificial turf. The remaining garden was transformed into a large planting bed traversed by a path, and new borders were added along the retaining wall and reflecting pool. To ensure there would be a variety of colours and foliage year-round, Partridge included a lime-green sedge that is native to New Zealand, called Carex comans “Frosted Curls,” along with New Zealand flax lily (Phormium ‘Burgundy’) and blue fescue grass (Festuca glauca ‘Beyond Blue’).

Debbie says she and her husband are delighted with how their new garden and its low maintenance requirements fit in so nicely with the surrounding landscape. And so are the hummingbirds, she adds. They have stopped going to the hanging feeder, choosing instead to come into the garden and sip nectar from real flowers. “I drive an electric car, don’t eat meat and try to do good things for the environment,” Debbie says. “This garden reflects what we are all about.” •

A Grande Dame is Back in Her Element

PHOTOGRAPHY: JEAN BLAIS Once upon a time (1847), high on the slopes of Westmount, a unique house was built: a...