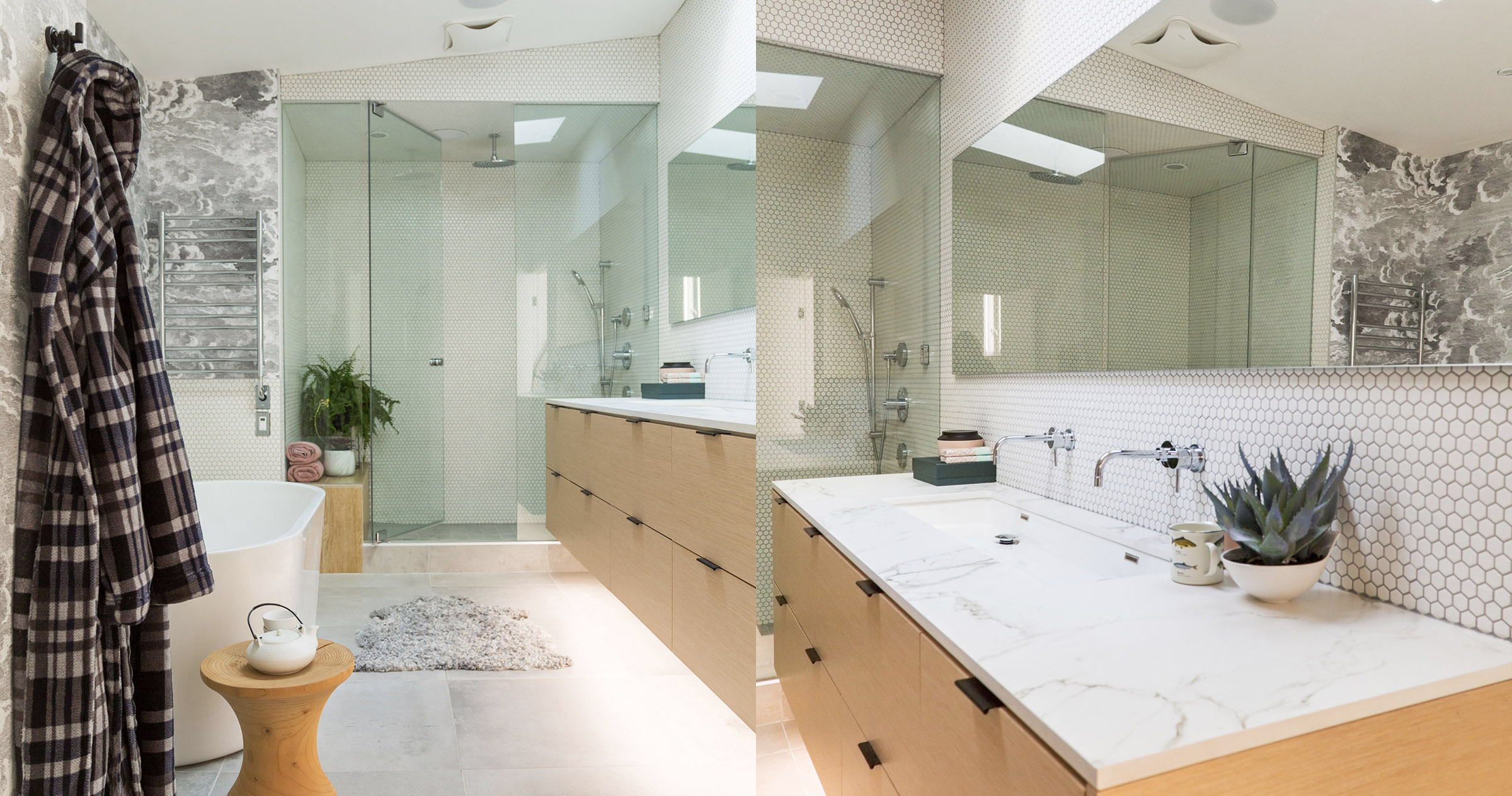 Aly Sumar travels – a lot. This hard-working banker has had the opportunity to stay in top-quality hotels, and he wanted similar low-key luxury in his new home in the Altadore neighbourhood of Calgary.

Aly asked his friend, interior designer Elena Del Bucchia, principal of elena del bucchia DESIGN, for help in getting exactly the look and feel he wanted. He had discovered this home in the process of being built, so he and Del Bucchia were able to design it almost from the drywall up before he moved in just over two years ago.

Aly didn’t give Del Bucchia a lot of specifics when discussing the design of the ensuite master bathroom except that he wanted to feel as though he were in a luxurious hotel. “I relied a lot on Elena to help with ideas,” he says. “We tore apart a lot of different concepts, but I did know I like a modern aesthetic.”

Says Del Bucchia, “I asked him ‘Is there a specific way you want your space to look, feel and function?’ and he said ‘Not really. I trust you and you know what I like.’ He likes high-end things and referred to ‘subtle luxury.’ He recognizes craftsmanship and quality of materials.”

In terms of colour, “he kept saying ‘I am not sure,’ ” Del Bucchia recounts. “But he always has a suit and tie on, so I said ‘I know you like suits and shoes; why don’t we refer to them? We’ll give the bathroom more masculine features – plaid and monochromatic – but it will feel like a spa.”

Aly, however, was very decided about the room’s function. In the space (10 feet wide and 20.5 feet long) he wanted a heated towel rack, natural light, and the water closet separated with a door. But the big thing was steam: he wanted a steam shower, and the builder accommodated with a large space.

In the shower, Del Bucchia kept the room’s monochromatic colour scheme and then added a shower bench clad in oak-look tiles, which is a nod to the custom-made oak cabinetry in the room.

The floating vanity reinforces the European sauna look, with an undermount trough sink and wall-mounted faucets. The marble-look countertop is durable Dekton, which is practical and needs neither a stain nor sealing.

On the floor, 24-inch-square porcelain tiles that resemble concrete sit atop an underfloor heating system. Similar but smaller tiles are used on the shower floor.

To counter all the smooth surfaces in the room, Del Bucchia provided a natural sheepskin rug. To add more texture, “I suggested wallpaper, something he can also see in the mirror,” she says. “It has a soothing look of captivating clouds.”

In addition, an extra skylight was added to the bathroom.

While appreciating the room’s sleek, unfussy style, Aly finds it warm in both tone and temperature. “There’s lots of natural light,” he says. “I rarely need to turn on the lights.

“But my favourite aspect is the combination of steam shower, heated towels and heated tiles. Especially coming home from a long dog walk in the dead of winter. My first steam was amazing. It’s a place to let go of thoughts and unwind for the evening.” •

Perfect For The Whole Family