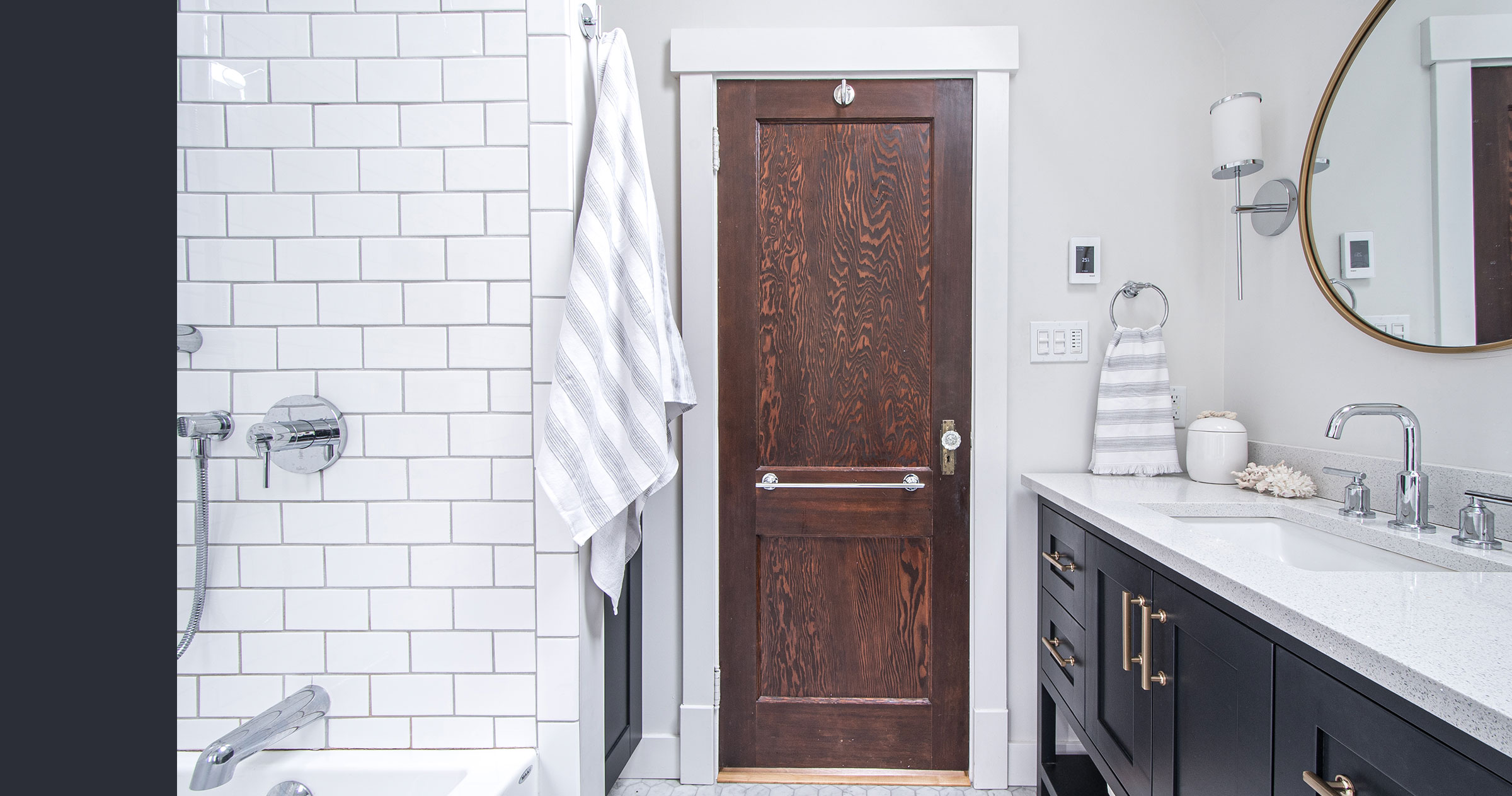 The 75-year-old home that Julie Tompa Wolthausen and her husband Dan bought in west-end Halifax has needed a lot of love, attention and remodelling over the years.  It had been renovated by its previous owner for quick resale in what Julie calls “a cheap flip job.”

The main bathroom was showing its age and was too small and cramped for the family of four. “We wanted it to be modern but to fit with the age of the house,” Julie says. “I wanted it light and bright.”

Because of its location, tucked into a corner of the front of the house, there was no easy way to increase its size. But they could go up, so they removed the cracked ceiling to get extra height and added decorative wood beams and a skylight.

To create more space, interior designer Charlotte Skiba removed the small stand-alone shower, substituting a bath/shower combo. To solve the room’s other main problem, a lack of storage, she replaced the pedestal sink with a large vanity, and added shelving and a cabinet in a nook between the new tub and the wall.

“The rest of the home has a classic look, so we went with subway tiles and classic marble,” says Skiba, owner and principal of Charlotte Interiors. She used a three-inch hexagonal Carrara marble tile for the floor, and a smaller, one-inch version for the nooks inset into the shower. To keep it contemporary, she chose accents in mixed metals: gold colour on the mirror frame and vanity pulls, and chrome on the faucets and on both the hanging, sputnik-style light fixture and the wall sconces. “It gives more of a lived-in, comfortable, casual feel than the traditional use of one finish,” Skiba says. “It gives a bit of interest to the space.”

Julie says they considered, albeit briefly, more contemporary looks, including some high-pattern floor tiles. “But we felt that in five years it would look very 2019,” she says, “So we stuck with the classic marble tile. Charlotte indulged our desire to explore options, but we came back close to what she originally proposed.”

The new space functions beautifully for the family, Julie says, so much so that they’ve put another renovation plan on hold. They had wanted to add a shower to the partial bathroom in their attic master suite, but no more. “After this, we don’t feel like we need another one upstairs,” she says. “It’s so nice, that we didn’t want to leave it just to the kids.” •