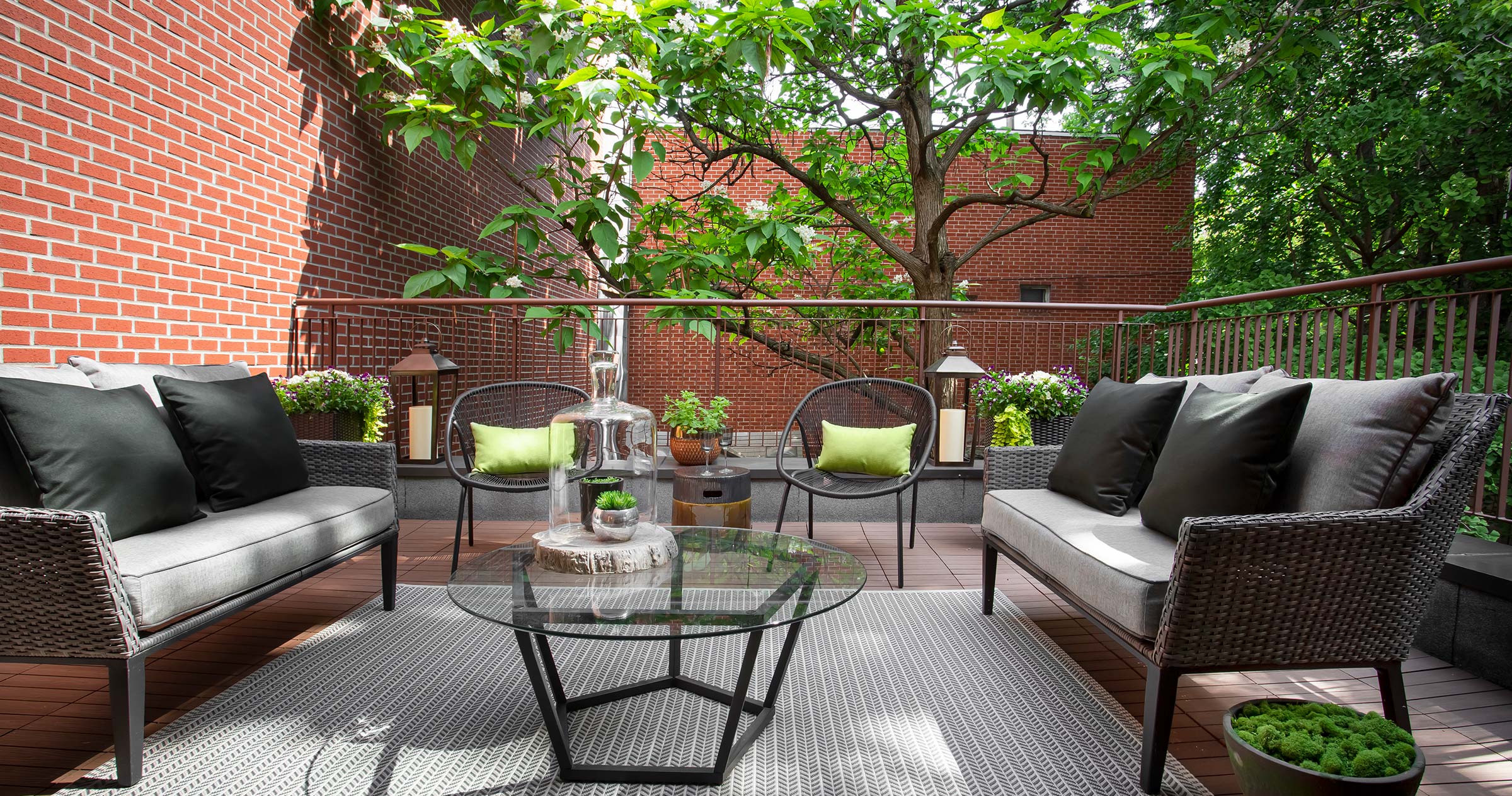 This historic home in downtown Montreal has an unusually spacious backyard

Few city homes can boast a backyard as large and impressive as the one at Yannick Côté’s home in the Village in downtown Montreal. Fewer still can claim that horse stables used to stand on roughly the same space as the outdoor dining table or firepit.

Yannick isn’t completely sure about the stables or other details of the 140-year-old home’s history; none of the old records has survived. But he has heard its lore from older neighbours who’ve lived in the area most of their lives. Originally built as a three-storey home, it was later converted to a triplex and then, several decades ago, transformed back into a single-family home.

Yannick and his partner Mike love the convenience of living in such a central location. They’re close to the Metro, walking distance to Old Montreal, downtown and the Plateau Mont Royal. But that amazing outdoor space was one of the things Yannick and Mike liked best when they moved in. In addition to the garden and outdoor space, there are two decks: one off the second-floor den, another off the master bedroom on the third floor.

When they bought the house, all the major structural renovations and restorations had been carried out, including the exposing of original ceiling beams. All they had to do was decorate it.

While they were both in sync when it came to the outdoors, tackling the inside of the house was a little more challenging. They have very different styles. “Everything that’s shiny, like the chrome light fixture in the den, the glass table, that’s him,” Yannick says. “The raw fibres and matte finishes, that’s more me.”

At the beginning, it was a challenge to find common ground, he recalls, until they spotted some grey leather chairs at Maison Corbeil, and things started to fall into place. “That’s how it all started,” Yannick says. “We just fell in love with them.” It was the details on those chairs that won them both over: the channels on the seat, the honeycomb-patterned back, the metal frame. “And it’s comfortable,” he adds. “It’s not just a pretty chair. I love comfort and want furniture to be practical. Mike is not so much about practicality, but about the look.”

A designer with his own firm, Yannick also drew inspiration from his art collection, pieces he’s owned for years, purchased back when he worked in art galleries, and others he collected on his travels. Many of those colours found their way into sofas and accent pillows, as he worked to integrate them into the decor.

He also wanted to play to the home’s historic features, such as the dark ceiling beams, and to incorporate elements from the kitchen and bathroom renovations. “The kitchen has a reddish tone, we used that,” he says. “We wanted to really integrate the existing architectural elements, the features that were already there.” The end result is something he considers a transitional style, with an emphasis on mid-century pieces.

“For day-to-day living, it’s very cozy,” Yannick says of his home. “It’s on three levels, but it feels very connected.” On the main floor there is a formal living room, along with the kitchen and dining areas. The living room is right next to the sidewalk; so to have more privacy, they converted one of the two bedrooms on the second floor into a den where they relax and watch TV. A large outdoor terrace off the den also has sofas, chairs and space to unwind. The master bedroom and bath are on the top floor, with an open-area tub right at the top of the stairs. That was designed by the previous owners, Yannick says. At first, they considered changing it, but gradually got used to it. “It’s kind of an awkward feature,” he concedes. “It’s not for everybody.”

That large yard they fell in love with is the main reason they’ve just sold the house; there was just too much upkeep involved, he says. But the times spent in that space is what he’ll remember most about this house. “We had some very nice barbecues with close friends and family; there’s a lot of space for everybody. To entertain in that yard in the summer is quite special,” Yannick says. “If we could find the same house but on a different lot with no maintenance, that would be amazing.” •

Photography: Tracey AytonStyling: Paulie Dhillon Effective communication does not need to be loud. Just as beauty need not be bold....

A perfectly designed kitchen makes a house a home, whether it’s an expansive area with an oversized island or a...