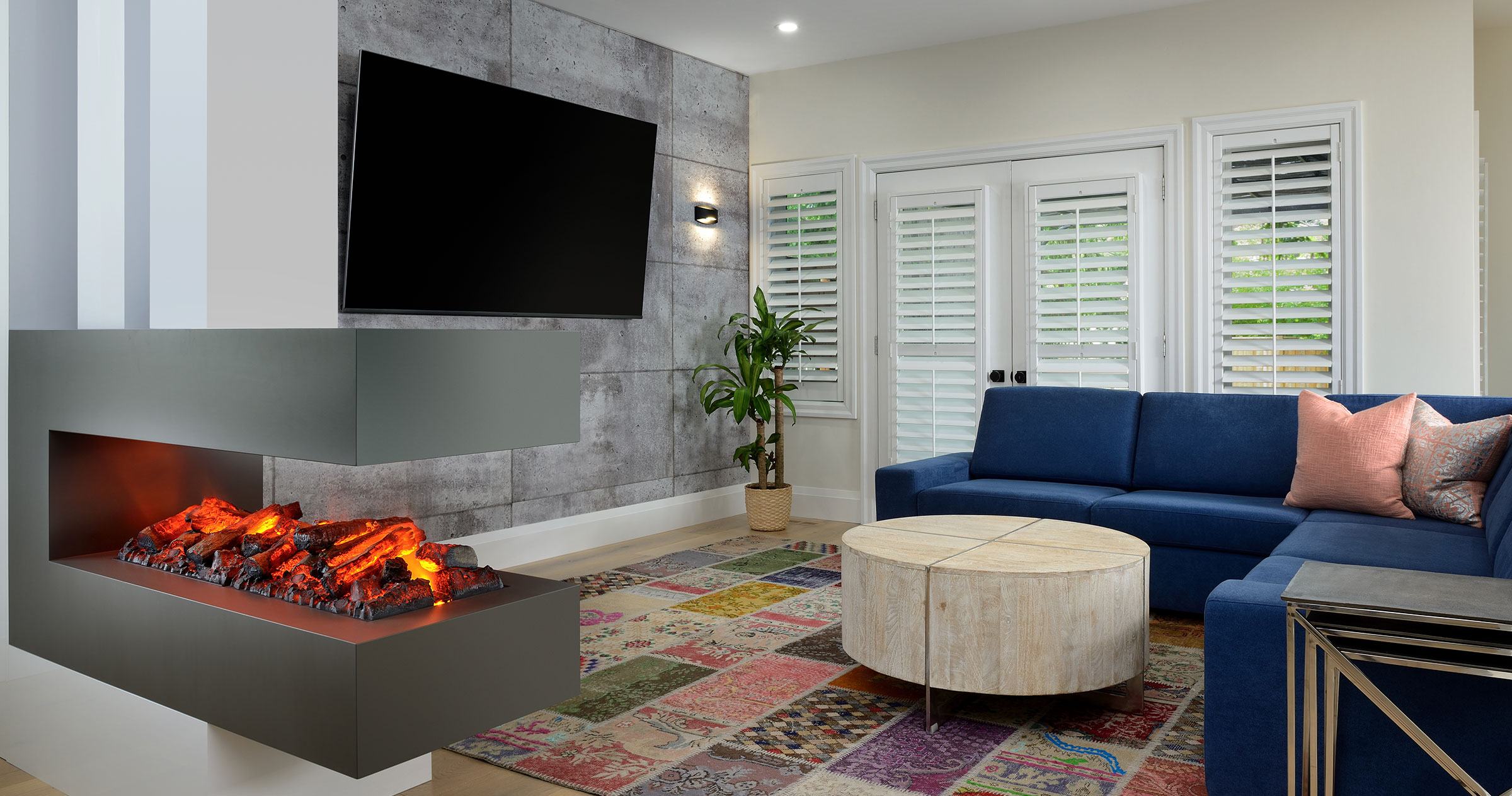 A stained-glass window with geometric shapes, saved from an ancestral home. A patterned rug brought back from travels in Turkey. Paintings collected over a lifetime. These are a few of the sentimental pieces that give a newly renovated and redesigned contemporary home in Mississauga its soulfulness.

The young couple who hired designers Rana Saleh and Daniya Shah, partners in Toronto-based Phase2Design, to oversee the overhaul of the 20-year-old, 3,500-square-foot house they had purchased in the Clarkson neighbourhood, knew what they wanted. And so did Saleh and Shah, who had already worked with them on a couple of other projects.

“They are young, outgoing and fun-loving. And their style is a mix of traditional and modern,” says Shah.

She’s a doctor, he’s a dentist, and they have three school-aged children. They wanted their home to be modern, but comfortable.”

So Saleh and Shah set about designing modern open spaces that allowed in maximum natural light. They chose materials in a neutral palette to lend a cohesive aesthetic – from the basement music room to the upper floor bedrooms.

Along the way, they made room for the couple’s history and shared stories. The stained-glass window, for example, had been in the husband’s grandmother’s house in Iraq. Now it reflects brilliant rays of light from the office into the upstairs hallway. In the family room, a patterned area rug brought back from a trip lends a vibrant note to an otherwise stark space. Above the dining room table, three brass pendants found in Turkey cast exquisite patterns on the walls when lit.

Throughout the house, the designers gave the couple’s collection of Iraqi art center-stage status.

“This is a collection of modern art with traditional elements that they have been building over the years,” Shah says. “These are pieces with beautiful vibrant colours that describe so well who the couple is and what they love.”

“And, like all the personal touches that have been introduced all over the house, they make these otherwise modern spaces warm and inviting,” says Saleh.

A concrete-look wall in the family room is in fact clad in four-by-eight-foot MDF panels that look like the real thing but cost a fraction of the price, and are softer to the touch. A wall-mounted linear fireplace, open on three sides, is the room’s centerpiece. It’s a Dimplex Opti-Myst Technology electric fireplace– a safer alternative to real flame in a home with small children.

Saleh and Shah are always looking for ways to warm up their contemporary designs.  For instance, one of the boldest features in the house is a stairway that runs from the basement to the top floor. Its walls are covered in those same concrete-look panels, with glass panels instead of railings and spindles. To bring warmth, they chose hardwood for the stairs and installed two skylights in the roof.

The kitchen is outfitted with high-gloss white cabinets and an island topped with a quartz waterfall countertop, all by Kakoz Kitchens and Custom Cabinetry.  The designers introduced dark-hued mahogany-look laminate around one wall of cabinets. This does double duty: it warms the look of the white kitchen and re-introduces symmetry to a room with an existing window that isn’t centred.

Saleh and Shah are especially excited about the drama and romance they brought to the master bathroom. What had been the most generic of rooms is now a spa-like space. Large slate-look porcelain tiles line the floors. In the spacious shower, smaller versions of the same tile continue onto the walls, while small hexagonal shapes lend character to a niche.

“It was a challenge working with sloping ceilings in the bathroom and elsewhere,” Shah says. “But in the end, those slopes add another layer of interest.”

The doors throughout the home show the kind of whimsy Saleh and Shah bring to their projects. On the main floor, just off the front entrance, they camouflaged a door to the backyard with the same concrete-look panels that cover the rest of the wall. It becomes a “hidden” door. In the mudroom, there is a sliding door painted with black chalkboard paint that the children can draw on.

“Everything that was dull about this house has been brightened up and made modern,” Saleh says. “It’s a place this family will love for a long time.” •

Photography: Larry ArnalStyling: Ildiko Horvath Ildiko Horvath embraces colour—the brighter, the better. She turned her passion for pigment into a...