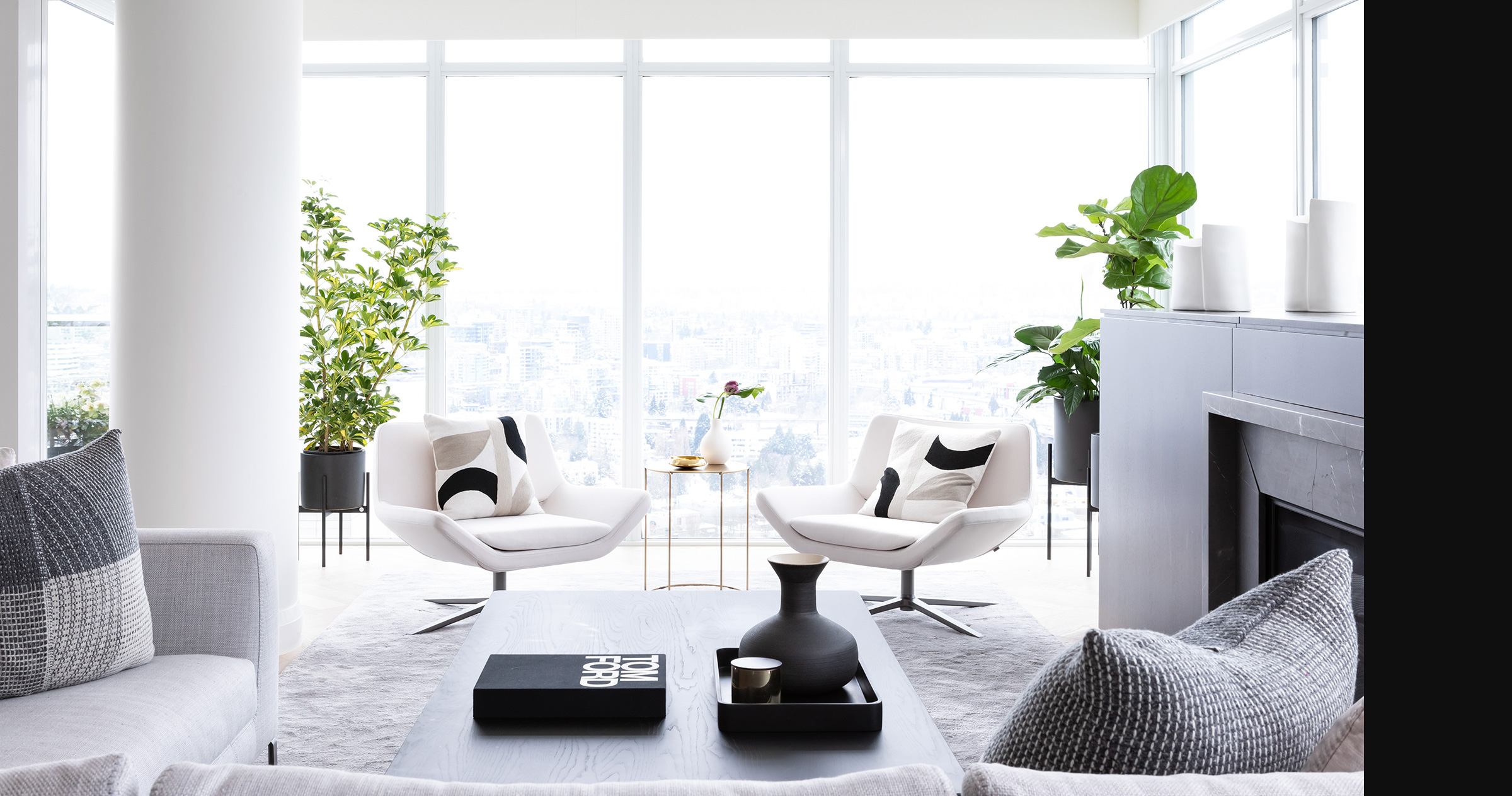 Rooms With a View

For one Vancouver couple, downsizing meant trading in their traditional family home of 30 years for city life: the 37th floor of a newly built high-rise condo, with views over the city and across English Bay.

They bought the entire floor—3,250 square feet—with a plan to combine it into a single unit and they left behind everything except the artwork they had collected over the years.

The couple turned to designer Sophie Burke of Sophie Burke Design to give them the new contemporary home they wanted. Burke and the firm’s lead designer, Nicole Gomes, had a blank slate to work with; the only thing set in stone was the location of the elevator and the unit’s front door, so they set out to match the layout to their clients’ wish list, while maximizing the views and taking advantage of all the natural light.

The space was configured to create a master bedroom with his and her ensuite bathrooms, two other guest bedrooms and a guest bath, a family room, powder room, living room, and dining and kitchen area with easy flow for entertaining.

Though the homeowners were keen to embrace a contemporary design, they still wanted it to feel comfortable and homey, says Gomes. To achieve that, the designers added a few traditional touches: a herringbone pattern for the white oak floors, and textured wallpapers, including navy grasscloth in the dining area and hallways.

“Because they’re so high up, they have 360-degree views and balconies facing in all different directions,” Gomes says. But no matter how you arrange things, with so many floor-to-ceiling windows and so few walls, at some point you have to block some of that view. The living room fireplace, for instance, stands in front of a wall of windows. The custom-built unit that encases it was kept as low as possible, she says, and designed to extend out on one side to hide a large-screen television. It’s installed on a hydraulic lift and pops up when the homeowners want to watch it.

“Most people are worried about restricting the view, but there are views everywhere,” the homeowner says. “We have friends who put their sofa in front of the windows. That also blocks the view. We weren’t sure at first, but now we’re really happy we did it.”

Gomes says the homeowner was drawn to greys and blues with white. That colour scheme, the homeowner says, reminded her of a navy blazer with a white shirt, a look she calls classic but not formal, and she likes that it’s offset with some pale grey. “When I look at it, these are colours I wear a lot,” the homeowner says. “We had a lot of red in our previous place. I said ‘no more.’ ”

Gomes and Burke also carefully considered the entertaining space. The couple wanted a large dining table that could seat 10 to 12 people and a kitchen island that could accommodate up to eight stools. They carved out a bar area, with a wine fridge, sparkling water on tap and a second, small dishwasher for glasses. In the kitchen, many of the appliances are integrated, including freezer drawers in the 13-foot-long island, and another television, hidden behind the cabinets over the sink.

In the bedrooms, including the master suite, the homeowner opted for plush carpets to create a feeling of warmth and luxury underfoot, Gomes says. As well, the couple insisted on both his and her bathrooms. There’s a practical side: his has a steam area in the shower.  Hers has both a soaker tub and a shower. “I like it a little prettier than he would,” the homeowner says, “and tidier.”

The light-coloured bedroom and ensuite bathrooms with both white and marble tiles feel very soft and relaxing, Gomes says, especially “coming in from the navy hallways. It’s quite light and fresh.”

The transition to city living has worked well for the couple, the homeowner says. “We really love being on one floor; it’s quite different.” And though the many windows can sometimes make it feel like they’re in a fishbowl, there’s a magic to it, especially at night. “You wake up at night and can feel like you’re in Las Vegas.” •