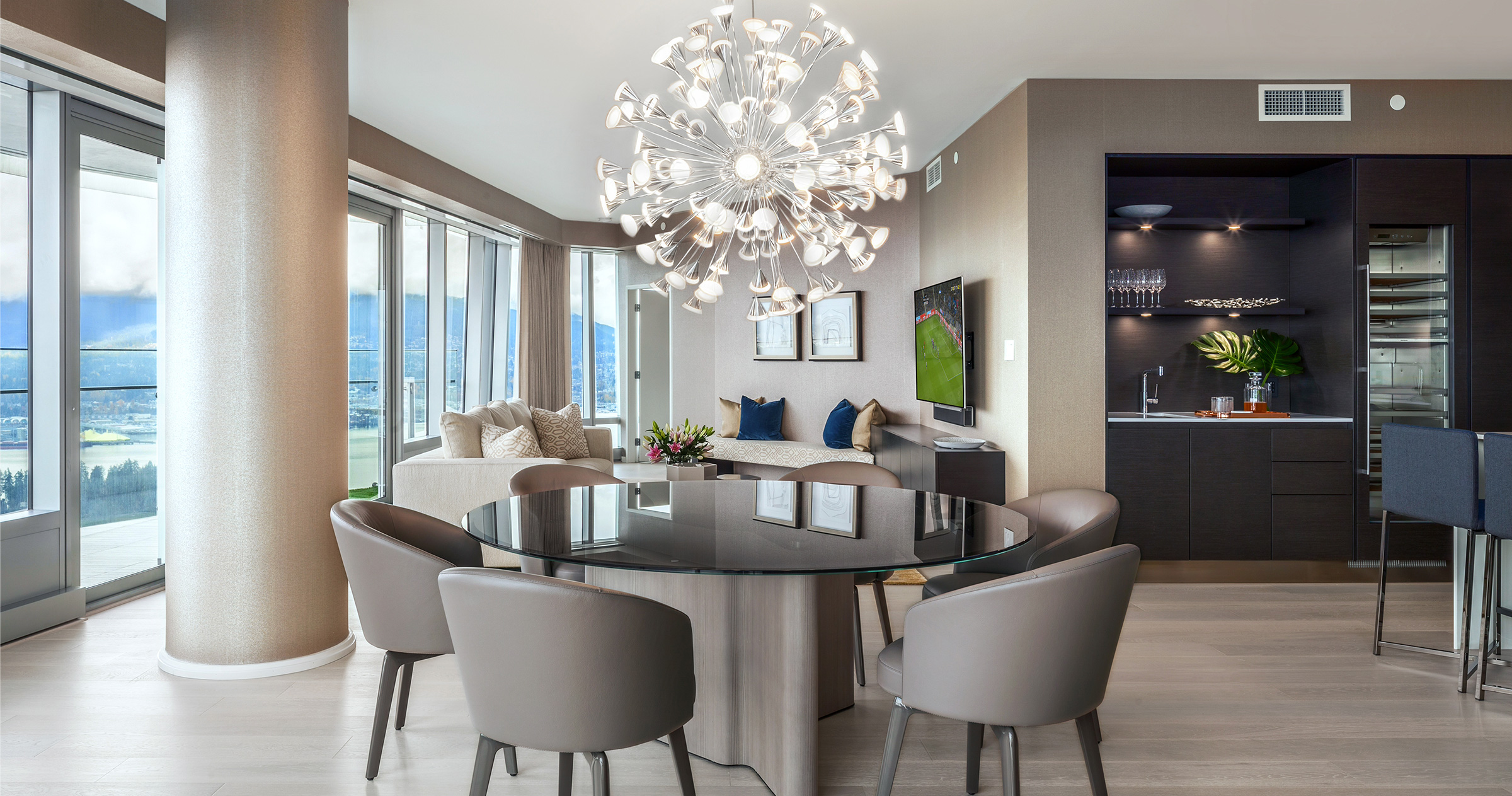 Negar Reihani is accustomed to transforming old spaces into new ones; that’s her job as an interior designer in Vancouver. However, in the case of a brand-new luxury condominium unit in the city’s downtown sector, Reihani was asked to go one step further – to transform new space into yet even newer space. The owners of the 2,500-square-foot condo in the Coal Harbour neighbourhood wanted their West Coast vacation home to have a boutique-hotel style with high-end contemporary Italian furnishings and clean sight lines.

But when the owners took possession of the new build, they found some of the interior finishes of the condo were not what they had expected … not luxurious enough. Had they gone ahead and furnished the new space without upgrading some of the interior finishes, Reihani says, the end result would not have measured up to expectations: “It would have been like giving fine fabric to a tailor who cuts off-the-rack suits for an ordinary men’s store.”

“We had to come up with a quick plan of attack,” says Reihani, owner and principal designer of Space Harmony studio. The owners, a young Asian couple who live in China and come and go, wanted their Vancouver pied-à-terre to be “modern and comfortable, almost gender-neutral … like a hotel, but homier.” To that end, Reihani suggested the couple allocate 30 per cent of their budget to refinishing the condo and the remaining 70 per cent to the purchase of the fine Italian furnishings they desired.

Redefining the space was one of the first things that needed changing, the designer says. The condo has an open-concept design, and its floor plan is shaped like a semi-circle, with floor-to-ceiling windows on the exterior curve. The windows provide spectacular 180-degree views of Vancouver’s urbanscape and water, including Burrard Inlet, Stanley Park and the ocean beyond.

Originally, says Reihani, the dining area, lounge space and formal seating area – in that order – were lined up in a row around the windows. She suggested the dining area be moved so it would be between the two seating areas and directly adjacent to the kitchen. “We wanted to create different zones of seating,” she says. By pushing the dining area into the middle of the space, it became a focal point. Reihani suggested a large round table – tinted glass on a grey oak sculptural base – to soften the space, facilitate flow and still meet Asian cultural expectations.

New, wide-plank greyish-white oak floors replaced the dark wood flooring that came with the condo. Seagrass wallpaper in a grey-beige tone was installed throughout the entire unit, harmonizing the space and creating warmth and texture. “Everything is about layers,” says Reihani. “It’s how you create interest, a ‘wow’ effect.’’

The owners loved the kitchen’s custom millwork and Gaggenau appliances, she says. The contemporary cabinets in exotic West African wenge wood were outfitted with touch-latch fittings that eliminated the need for knobs and handles. Many of the cabinets were recessed to add further interest. But a stainless-steel backsplash diminished the kitchen’s clean contemporary look, so a translucent painted glass backsplash was installed as a replacement. “It totally changed the whole look,” says Reihani.

In the new lounge area, she says, a floating wall bench was added across from the sectional sofa to create face-to-face seating; it also provides a perch from which to enjoy the view. “It’s now the owners’ favourite place to sit,” she says.

The master bathroom, which was originally equipped with a large glass shower enclosure housing a standalone tub, was renovated. The bath was taken out of the shower enclosure, and two separate shower systems and a heated bench were installed to create one luxurious, oversized shower.

And, Reihani says, something had to be done to improve the entrance foyer. It felt cold and unwelcoming. A new lighting fixture shaped like an egg was installed on a new mirrored wall to brighten the space, and a floating bench was installed to add comfort. “In the end, they loved everything,” she says. “When they walked in once they returned to Canada, the condo’s new look surpassed what they had imagined. It was modern, elegant and their style.” •