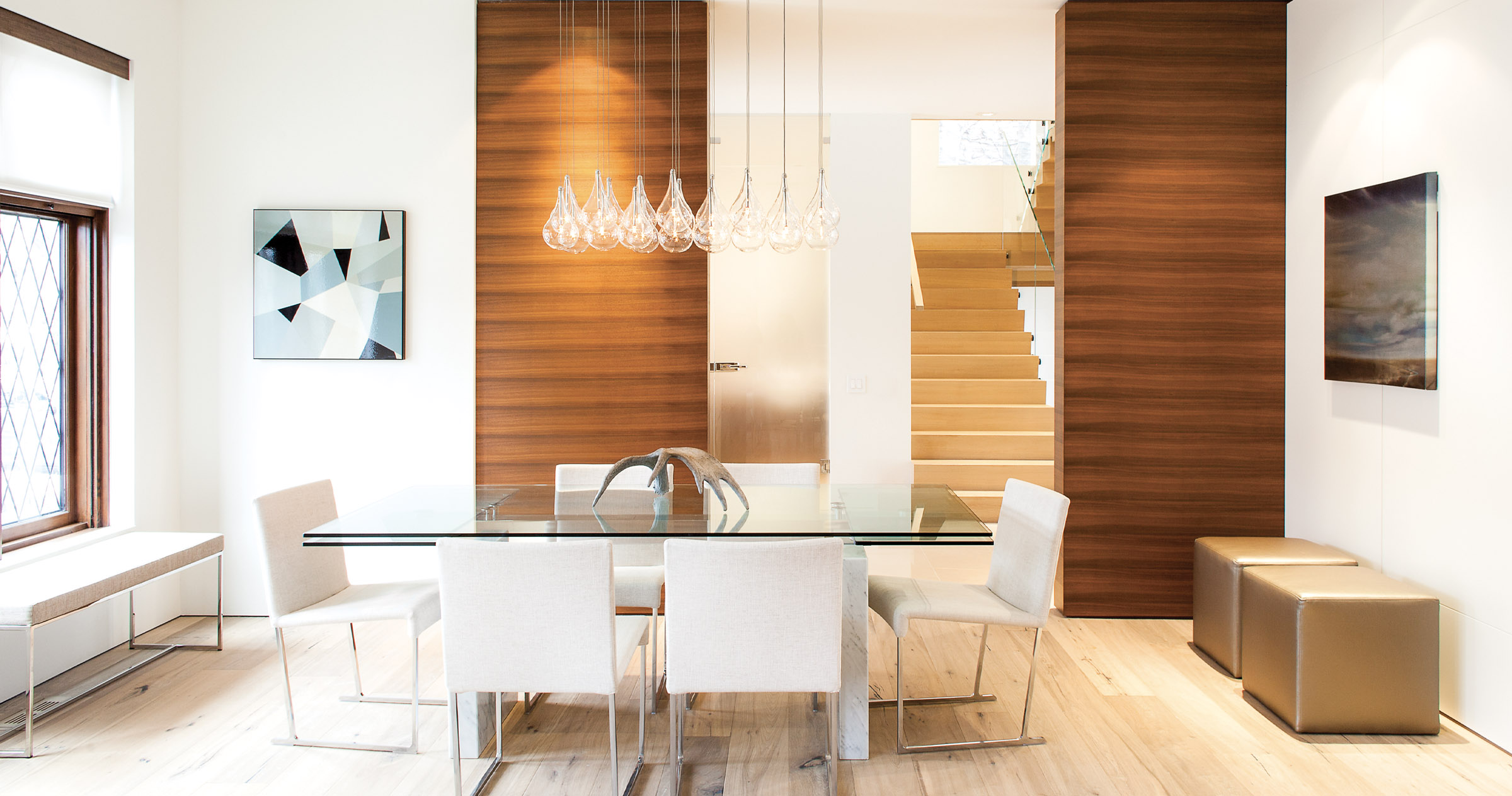 After a fire guts a traditional Forest Hill home, it is rebuilt in a warm style.

This exquisite modern home was born out of tragedy after a fire destroyed much of the interior of the traditional Tudor-style structure. While the facade of the house was salvaged, much of the interior was burned and the family of four who lived there found themselves working with a clean slate.

For the wife, this signaled a time to make big changes. She wanted to transform their traditional Forest Hill home into a contemporary-style sanctuary. The husband, however, wanted to maintain the time-honored look of the classic home.

For designer Jason Forbes of Jason Forbes Design in Toronto, this disparity was a challenge. “Getting the husband on board with the modern look the wife wanted was really the biggest challenge of the project,” he says. “It was completely outside his comfort zone, yet she was 100 per cent for it, ready to go the whole distance to create an open-concept modern space.”

Rather than trying to reconcile the differing tastes or ease the husband into it with small contemporary accents, Forbes went ahead full throttle with what the wife clearly wanted. “But he did get an office that was more traditional,” the designer says of the husband.

As he explored design options with the couple, Forbes started to realize that the husband was most concerned about having texture and warmth in his home. The designer knew that could easily be achieved while satisfying the wife’s desire for a fresh, up-to-date look.

Reproducing the same leaded windows that had existed prior to the fire helped balance the modern lines; they provide an attractive contrast to the slick, neutral look of the main living spaces.

In the master bedroom, Forbes used a grasscloth wallpaper to create texture and warmth, offsetting the modern bed and nightstands. It’s a far cry from the four-poster iron bed the homeowners had previously had.

Highlighting the modern look throughout are the natural oak wood floors. They underscore the airy feeling of the house and are “soft on the feet” as an added bonus.

For Forbes, one of the showpiece rooms of the project is the dining room, with the magnificent Roche Bobois table and the Ligne Roset chairs sitting under a magnificent chandelier “that sparkles like stars when it lights up.”

There were other challenges involved in creating the open, modern concept. The family has two young boys, so the designer had to make the home family-friendly, a struggle when working with the hard edges and open spaces of a modern home. “They still needed storage and cozy spaces to meet their needs as a family,” says Forbes.

In the den, the minimal look meant no coffee table, but he incorporated storage space into a wall unit, and a shaggy ottoman is a favourite of the boys, aged five and eight, while they play video games. In the master bedroom, a Womb Chair – designed by Eero Saarinen to provide a place for furniture designer Florence Knoll to curl up in – offers a modern oasis of calm and is where the parents read to their children every night.

And while the original kitchen plan didn’t include a table, Forbes knew a family with young children would need an eat-in kitchen, so he created a table that cascades down from the island.

One defining element of the job was incorporating some of the family’s artwork into the home. Although much of the collection had been destroyed in the fire, a bright scene brought all the colour necessary to the living room and a cool painting of a camera became a defining piece in the family room. “I had beautiful pieces to work with,” Forbes says.

In general, he adds, he believes in strong colour as an accent in an otherwise neutral room. “You can inject colour with just a few accents and the room will read as that colour,” he says.

In the end, the husband loved the results and the house reflects a growing trend toward modern style and away from traditional. “Traditional is taking a hit because modern looks really good the way it is being done today,” says Forbes. “It’s not that cheesy chrome modern. It’s warm and elegant.” •