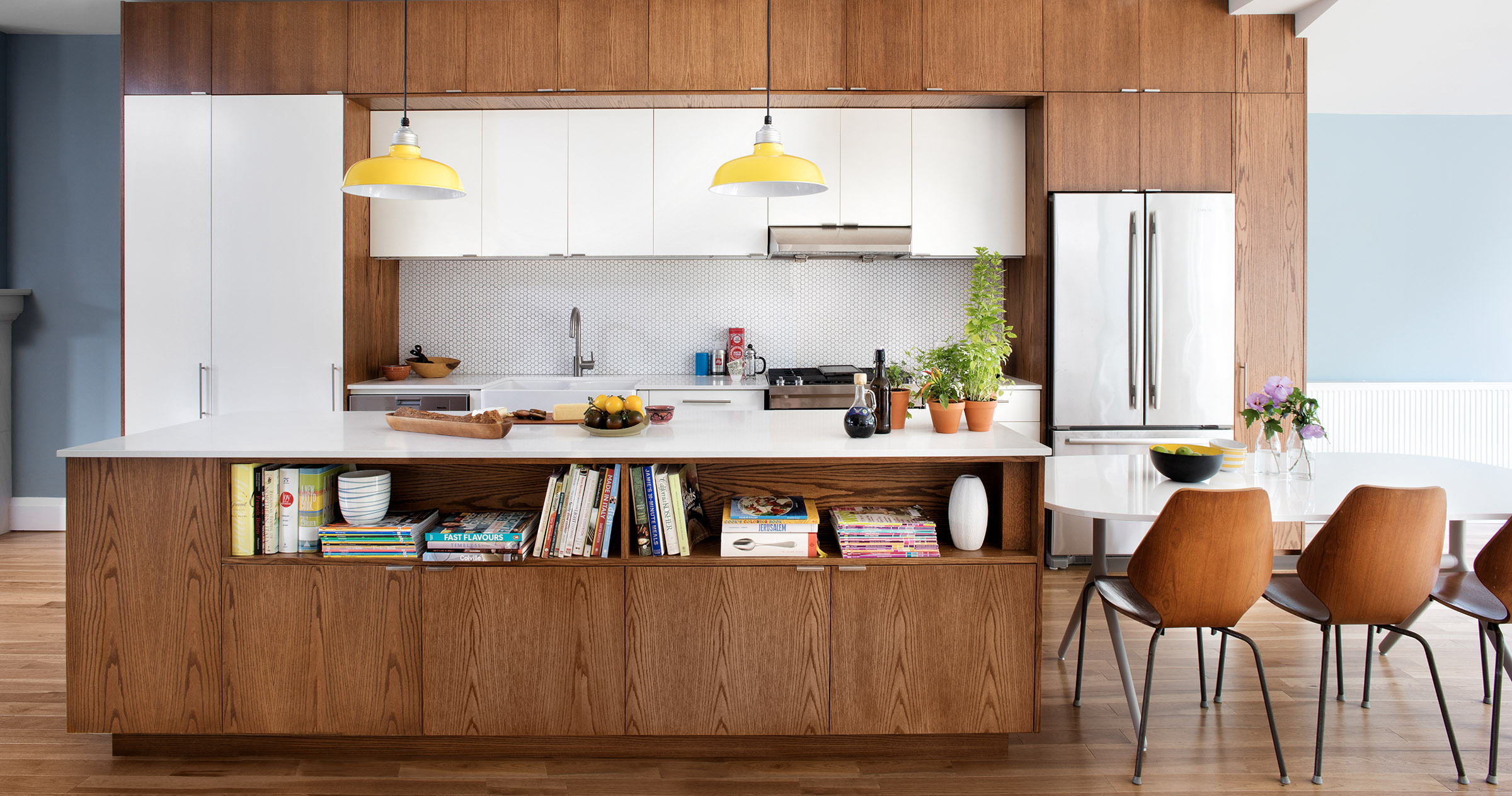 Designer Lisa Lev knew that the home in mid-town Toronto would be a challenge to design when she was brought in a few years ago to look at it by its owners, a young couple. It was actually three apartments with dark, constricted spaces.

The couple wanted to inhabit the house in the St. Clair Ave. and Christie St. area for a while to decide what they could do with the space. They called Lev back a year later, saying they were now ready to proceed with the project.

Lev stepped in and brought her clean lines and fresh approach to create the contemporary look the couple craved.

To respect the project’s budget, they focused on the priority spaces, including the main floor and the addition of a bathroom on the third floor where the master bedroom is located.

The owners wanted a bright, open space on the main level, something both functional and fun that would allow for free-flowing family areas while providing ample storage and, of course, a contemporary and warm aesthetic.

Lev chose hickory for the floors because it’s hard (good for family life) and because the variation of tones in it would allow for the use of other woods without creating a visual clash. While oak is more commonly used, these clients liked the fact that the hickory had more character, she says.

The floors blend well with the custom-made kitchen cabinets, which are a mix of natural red oak and white matte lacquer. To complement that, Lev chose Caesarstone countertops in Organic White and a hexagonal ceramic tile backsplash from Olympia Tile to complete the look.

Open shelving along the island breaks up the wood and provides colour, interest and functionality. The island was designed with a lower surface for dining. The owners wanted the table to be moveable, so it could be repositioned in front of the windows with an additional table attached to host large family holiday gatherings.

The yellow pendant lights from The Door Store above the kitchen island add vivid colour that Lev also used on the playful powder room door down the hall, just past the Ikea glossy-grey cabinets, which were installed for extra storage. “Yellow is my absolute favourite colour to use in a family home as an accent as it is bright and happy and fun,” she says.

The master bathroom presented some interesting challenges because of its location in an attic space. To create the now-striking space, which boasts a large window and a glassed-in shower with brass fixtures, Lev positioned the toilet in a sloping area with a door. She added a custom vanity with an offset sink in a niche at the window, and then put the shower in the middle of the space with a clear view in three directions, allowing light to enter.

Most clients, says Lev, would not have gone for a vanity at a window, which meant there was no mirror above it. These clients, however, like atypical things and loved the idea of looking outside while standing at the bathroom sink in the morning. Wall lights from Crate & Barrel were added to each side, as well as a pull-out mirror on one side.

Red oak was also used to create custom cabinetry at the home’s front entrance for the storage of coats and boots. One of the items the couple requested be used was a colourful light fixture they owned, which Lev positioned in the entry. “It, along with the striped stair runner, area carpet, cushions on the bench and large-scale photo, was a perfect way to introduce the clients’ personality and the pops of colour to come throughout the house,” Lev says.

No longer a warren of apartments, the house is now a joyful family home with touches of whimsy to please the homeowners and appeal to their love of the unusual. •