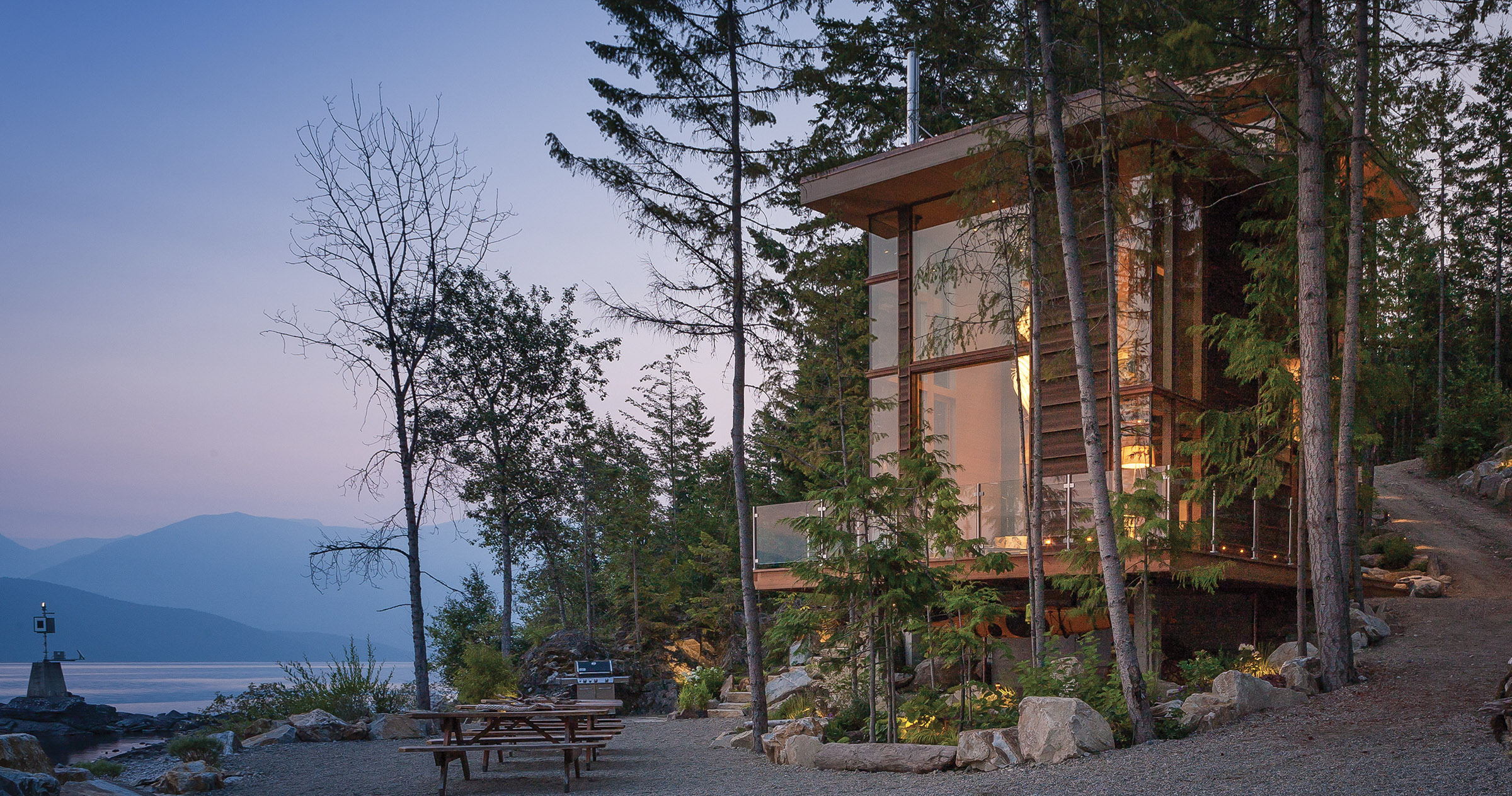 Lighthouse, they call it. It’s a sunny, spectacular house perched on the rocky shores of Kootenay Lake, with endless expanses of glass that pull in the light. There’s a beacon right outside the house, at the water’s edge. It blinks all night, warning passing boats of the protruding rocks.

But Brooke and Sandi Leatherman’s home is a lighthouse in other ways, too. The couple, who moved to British Columbia from California in 1994, have long been committed to building communities. One of the projects dearest to their hearts is the Kalein Hospice Centre (kaleinhospice.org) in nearby Nelson, which Sandi founded in 2010 to offer palliative care and counselling and to encourage dialogue about end-of-life issues. They’ve built a guesthouse a short walk from the main house where caregivers can go for respite and where artists, playwrights and authors can come to find inspiration. It’s the Leathermans’ way of sharing the beauty of the place with others.

“We wanted our house to be a place of welcome and exploration for anyone who came to it,” Brooke Leatherman says. “A place for conversation and enlightenment, a place to learn from each other.”

The couple had been looking for property in the Kootenays for nearly a decade when they came upon this wooded site 45 minutes outside Nelson, right on the main lake. On their first walk through these woods, they were awed by its majestic beauty, its wildness and peaceful nature. They hired architect Don Gurney of OpenSpace Architecture, a North Vancouver firm that specializes in contemporary coastal buildings. The firm oversaw both the architecture and interior design.

Gurney, whose family had long ago camped on the land, spent two years working with the owners to ensure the buildings would be “sited in right relationship to the landscape.”

“Most of the buildings I design put people in touch with nature, so they experience the seasons and landscapes in a full-frontal way,” Gurney says. “Many of the people we work for come from all over the world – New York, Sydney, Hong Kong – and we give them an experience of ‘super, natural B.C.’ We want to make sure the owners experience that.”

Brooke says he and Sandi have an affinity for contemporary architecture. They like glass, wood, steel and concrete. But more than anything, they wanted a soulful house that would exist in harmony with the land. “So many contemporary homes look amazing, but feel sterile,” Brooke says. “We wanted a place that would feel comfortable for the two of us, but also one that could embrace large groups. And we wanted it to be a peaceful house.”

They were intent on “bringing the outdoors in,” he says. And so they have. Every room in the two-storey house, as in the guesthouse, highlights and embraces the surrounding forests, mountains and lake. When visitors enter the living room they can’t help but gasp at “the big view” over Kootenay Lake. But there are “smaller views” that are no less enchanting, Brooke says, such as the scene out the kitchen window of the gardens that they’ve planted with indigenous species. It’s one of these small windows that he says brings him the most joy.

“If I look toward the northeast, I can see through a narrow horizontal strip of window and out onto a bluff with its greenery and rock. That’s my favourite view,” he says.

Brooke says he knew from the start that the house should be built of wood and concrete, materials that evoke the beauty of the massive fir trees and boulders that surround it. But it’s the myriad details and strokes of hand-worked craftsmanship that give the house its soulfulness.

To greet guests at the front entrance, a wood carving called Dragonfly by Haida artist Corey Bulpitt hangs on the wall, its motif inspired by the wings of the colourful insect. The concrete walls inside and outside the house are textured with wood-grain markings that soften the otherwise industrial personality of the material. And in the guesthouse, a curvy line of river rocks set into the concrete floor represents a meandering brook.

The house is poised on a long, narrow parcel of land sandwiched between Kootenay Lake and the Canadian Pacific railway tracks, which run parallel to the shoreline. To other potential buyers the proximity of the train might have been a deterrent. But Brooke says he and Sandi have embraced it. “Every day between five and six in the evening, the train goes by and we wave at the engineer and he waves back,” he says with a chuckle.

They allowed the train to work its way philosophically into the architectural design of the house, too. There’s a reference to the railway in the curved roofline and closely spaced crosspieces of the long, narrow house.

The guesthouse, reached by a path through the woods, is a 425-square-foot building with a large personality. While the main house is horizontal, the guesthouse is vertical. A tall, narrow, totem-like structure, its two storeys are built into a three-storey shell, a feat that makes the ceilings appear to soar. It’s a place for visiting family and friends, that is also open to caregivers who need a break.

“We meet a lot of people whose relatives are in palliative care. They are worn out and in need of a little respite,” Brooke says. “We wanted for them to have a place where they could come for a few days or a week to take a break.”

The guesthouse is just that place, with its endless views and restful design. It’s also a dramatic setting for one of the most impressive pieces in the Leathermans’ collection of light sculptures by artist Cameron Mathieson, whose work appears in international galleries. As it happens, Mathieson is a former housing contractor, and the Leathermans’ house was his last project before he left the profession to focus on his art.

Mathieson creates his dramatic, hauntingly beautiful sculptures from driftwood he gathers at remote Duncan Lake in the springtime, filling his truck with the weathered, gnarled and bent pieces that he later assembles with layers of paper and epoxy. When illuminated, the pieces glow.

When the building project was complete, the Leathermans held a party for the 75 tradespeople and contractors who had worked on the house and their family members. Each tradesperson was invited to bring an item that symbolized “home” for them. One brought a rock, another a feather found on the site, others photographs. The objects were placed in a time capsule near the front porch. “We think of ourselves as the diviners of this place,” says Brooke. “But so many others brought so much of themselves to it, too.” •

Back To Her Roots