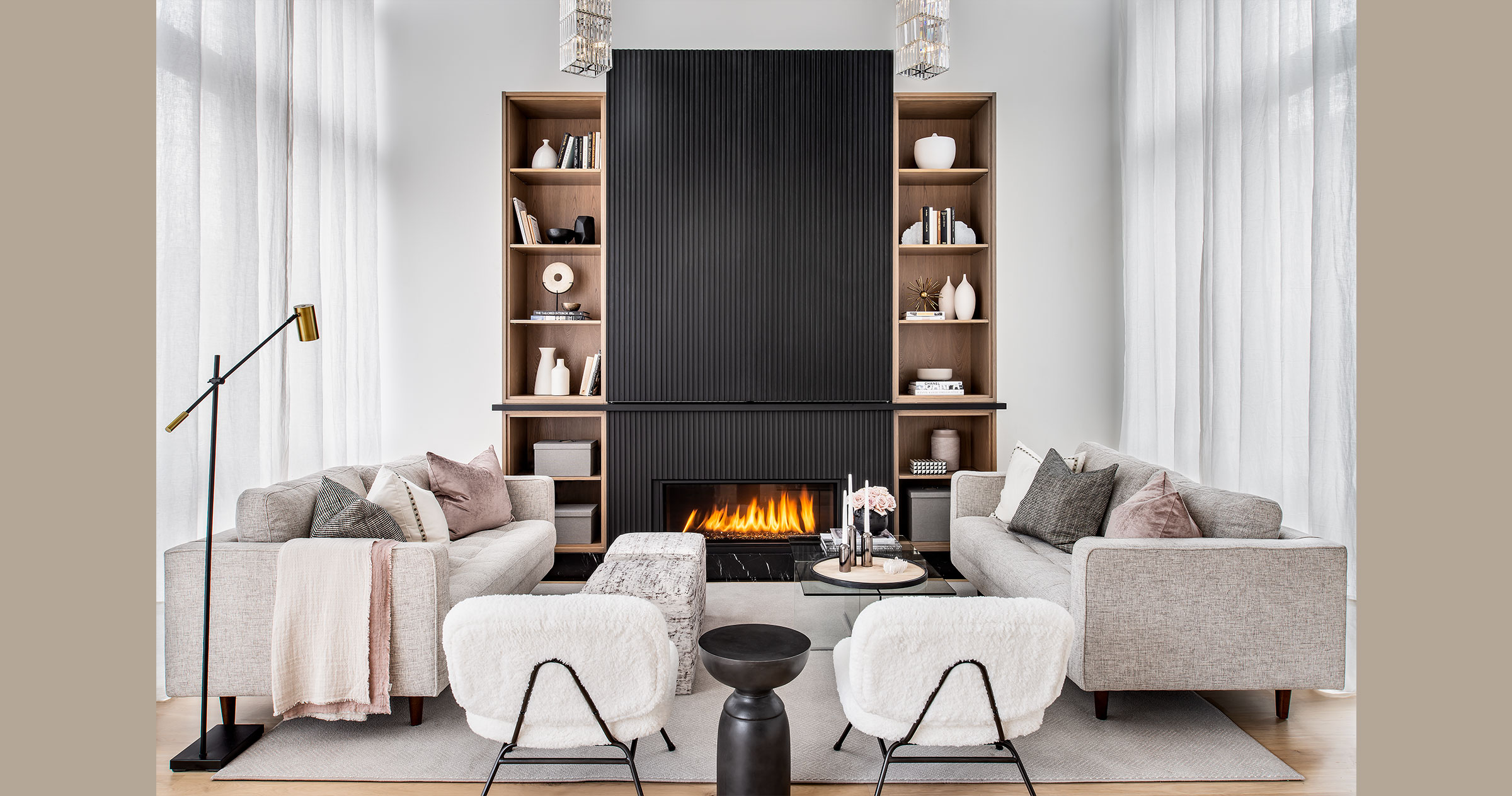 Few suburban homes can boast 20-foot-tall window walls. Though more common in upscale downtown condos, this feature is integral to the design of this newly built three-storey home in the Port Credit area of Mississauga, says its designer, Nicholas Ancerl.

“We really wanted to make the most of the southern exposure, which means lots of natural light,” says Ancerl, owner and principal of Ancerl Studio design firm. “Plus, they frame amazing views of the surrounding greenspace and nearby historic waterfront.”

The designer and his team were called in at the beginning of the project. A vacant 45-by-120-foot lot provided a blank canvas. They worked with the homeowner on every aspect, from concept through approvals and construction to interior furnishings. The completed 4,500-square-foot home was shortlisted in four categories by the 2020 International Design & Architecture Awards jury.

Window walls form a courtyard, cutting in at the midpoint of the main floor and extending upwards to the floor above it. The central dining room facing it benefits directly. And two other rooms at ground level benefit from the three sides of windows it makes possible.

The living room, located off the front entrance, receives light from two sides through 20-foot-tall windows. At the opposite end of the home, the family room that opens into the kitchen is also treated to the full 20-foot expanse on two sides. “That window adds a lot of both light and drama,” the designer says. “As a complement, we installed a 12-foot-high fireplace faced with black riveted steel beside it.”

The home’s layout includes three bedrooms on the second floor, with the third storey given entirely to the master suite. The basement has a spare bedroom, wine cellar, and family and home theatre rooms.

When it came to design, the homeowner, a single mother of one teenage daughter who recently relocated from China, was on board with the Ancerl Studio team’s contemporary approach. At the same time, her own tastes were more on the traditional side. So, in addition to the contemporary window walls and black steel roof, the home’s exterior is also clad in red brick.

The roof is adorned with gables, resulting in areas with sharply sloping ceilings on the third floor, where the master suite is located. The designers made ingenious use of one in the master bathroom, inserting a contemporary porthole window. In front of it stands a sculptural freestanding tub. A long vanity parallels it, over which a wall of mirrors lets the homeowner enjoy the reflected view as she applies makeup. “It feels like a spa somewhere in the Alps,” says Ancerl.

Natural materials were used judiciously in the home’s interior design. For consistency’s sake, the same six-inch engineered white oak flooring was run throughout. Sheer and chic white linen curtains soften some of the window walls. As well, every room has a finishing flourish in the form of sparkling crystal. Most striking are the unique crystal pot light casings in the centre of each square of the coffered ceilings that define the living room, breakfast area and kitchen.

And for a touch of timeless luxury, every tile and stone feature found in the house is of genuine marble: For the kitchen backsplash and countertop, strikingly veined Statuarietto marble slabs. A mix of solid and tumbled white mosaic marble tiles was used in the master bathroom, while an elegant burnished black marble surround adorns the adjoining bedroom’s fireplace. “As materials, both marble and crystal have the kind of Old-World elegance the homeowner wanted,” Ancerl says, “but the way we incorporated them is sophisticated and modern.”

The home’s design is also notable for what lies out of sight. A clutter-free entryway is ensured by two closets hidden behind cabinet doors in the first room to the right, the living room. Near the closets is the elevator that runs to all three storeys plus the basement. In the kitchen, a panel opens with a touch to reveal a second, smaller kitchen beyond. Called a wok, fry or spice kitchen, it is an amenity more commonly found in Vancouver homes.

In contrast, the dining area provides a feast for the eyes, and from every angle. Situated at the bottom of the stairwell, the ceiling soars to 30 feet above it. The stairway itself provides ample design interest, with plain oak treads that complement the railing, made of ultra-slender steel spindles. Each is slightly offset for a softer effect and finished in a mix of black, chrome and bronze.

And it is the room that has proven to be the homeowner’s favourite spot in the house. She loves nothing better than sitting in one of the refinished antique Vienna straw-backed chairs to gaze at the beautiful view outside the windows. Or, when entertaining, showing off the massive light fixture overhead that is more like an art installation than chandelier.

“We wanted every ceiling to have a distinctive feature,” Ancerl says. “I had seen one like this in a high-end shop in China, which was able to create this custom version to my exact specifications. And it’s a showstopper.”