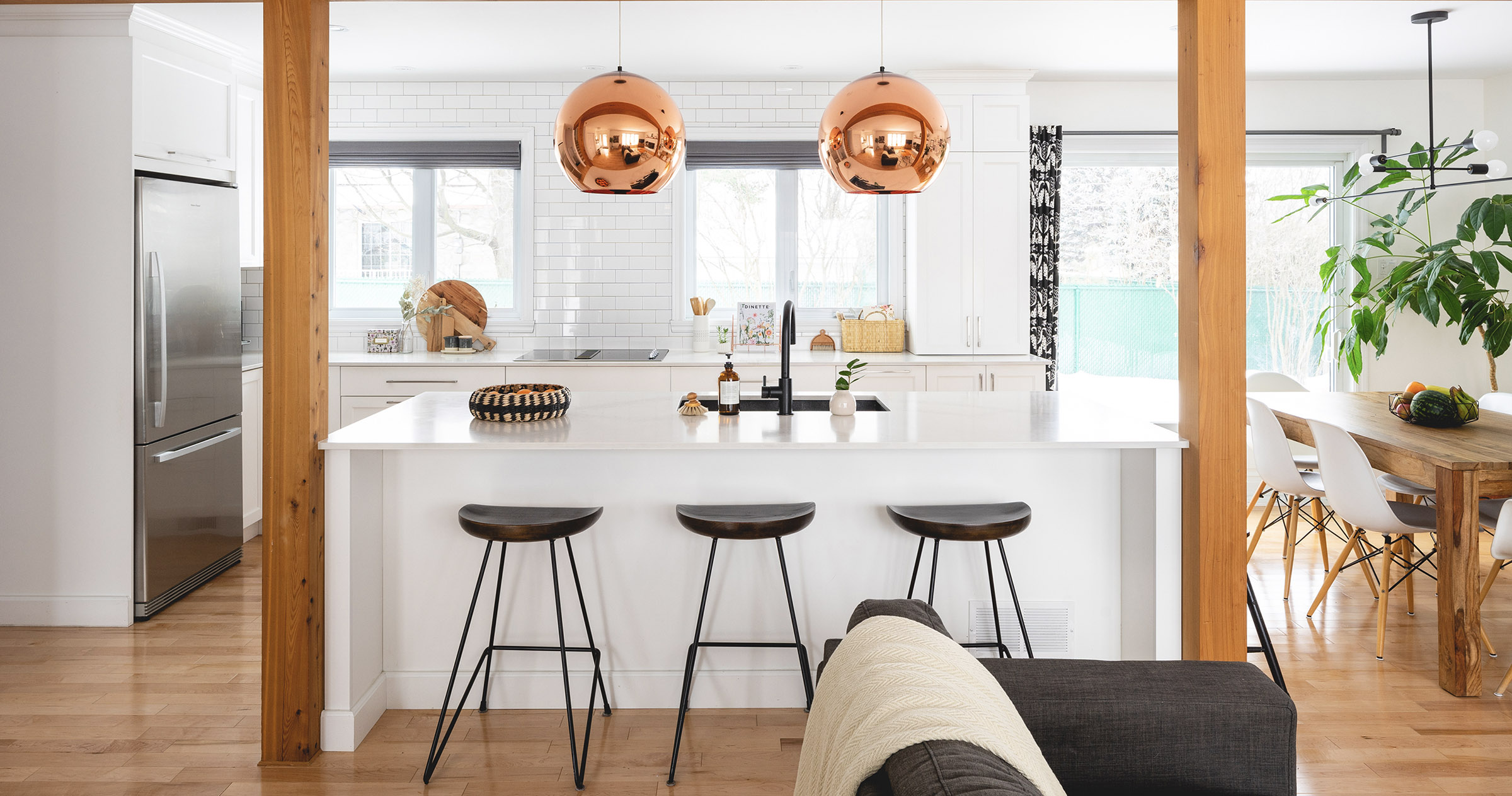 Back To Her Roots

Caroline Jodoin instinctively understood how to renovate the 1,800-square-foot home she bought in 2015 to make it perfect for her young family. After all, she’d grown up within those walls and knew every square inch.

“My parents lived there for 35 years, and it was very well-maintained structurally, but there were lots of cosmetic updates to do,” says Caroline, who co-owns Buk & Nola, a home furnishings boutique on Laurier Avenue in Montreal. “There was carpet everywhere – including the stairs and entry hall – and a wall separating the kitchen from the living room. But I knew it had huge potential.”

The three-bedroom house, built in a Montreal suburb in 1979, had good bones and a functional layout that Caroline decided would work well for her family, which includes two small children.

“Since there were already so many windows on the main floor, I knew that taking down the wall and repainting everything white – including the brown brick fireplace – would flood the house with light,” says Caroline, who oversaw the two-month renovation that included installing honey-toned maple flooring throughout, and a fresh new kitchen.

To replace the load-bearing wall separating the kitchen and living area, Caroline had a rustic cedar support beam installed, and flanked the new quartz-topped island with matching columns. Her children, aged three and six, often park themselves on the island’s counter-height stools – found at Maison Corbeil – to eat meals, do crafts and play games.

The crisp, white Shaker-style kitchen cabinets from Club Cuisine BCBG boosted the room’s function, adding much-needed storage for Caroline, who enjoys cooking and welcoming guests. A pair of spherical Tom Dixon copper pendant lights became the focal point of the entire first floor. “I knew I had to have them the minute I saw them; they were my big coup de coeur and make a huge statement,” she says.

Weaving Mid-Century Modern aesthetics with a Scandinavian-bohemian vibe, Caroline assembled artwork and furniture that offer comfort and serenity. For example, a feature wall of framed posters in the dining room showcases an eclectic collection Caroline has been amassing for years. “This is my favourite space in the house; I really love sitting at the Kasa dining room table, and the black light fixture over the table was custom-made for Buk & Nola,” she says.

She also had some fun designing the powder room, located a few steps down from the main living space near the garage. “It’s so tiny, and I wanted to do something funky for this guest bathroom and fell in love with this pineapple wallpaper,” she says.

Upstairs, she opted to paint one wall of the master bedroom a deep grey, even though the room is not large. “I’m always looking for design ideas online, and when I came upon a dark master bedroom on the Cup of Jo blog, it made me want a dark and cozy room,” says Caroline, adding that she hung floor-to-ceiling white drapery to soften the space.

Living here as an adult has brought Caroline great pleasure, and her parents approve of what she’s done to revamp the space. “They love it. My mother was so happy that I bought the house,” she says. “I have great memories of growing up here, and now we’re making new ones together.” •