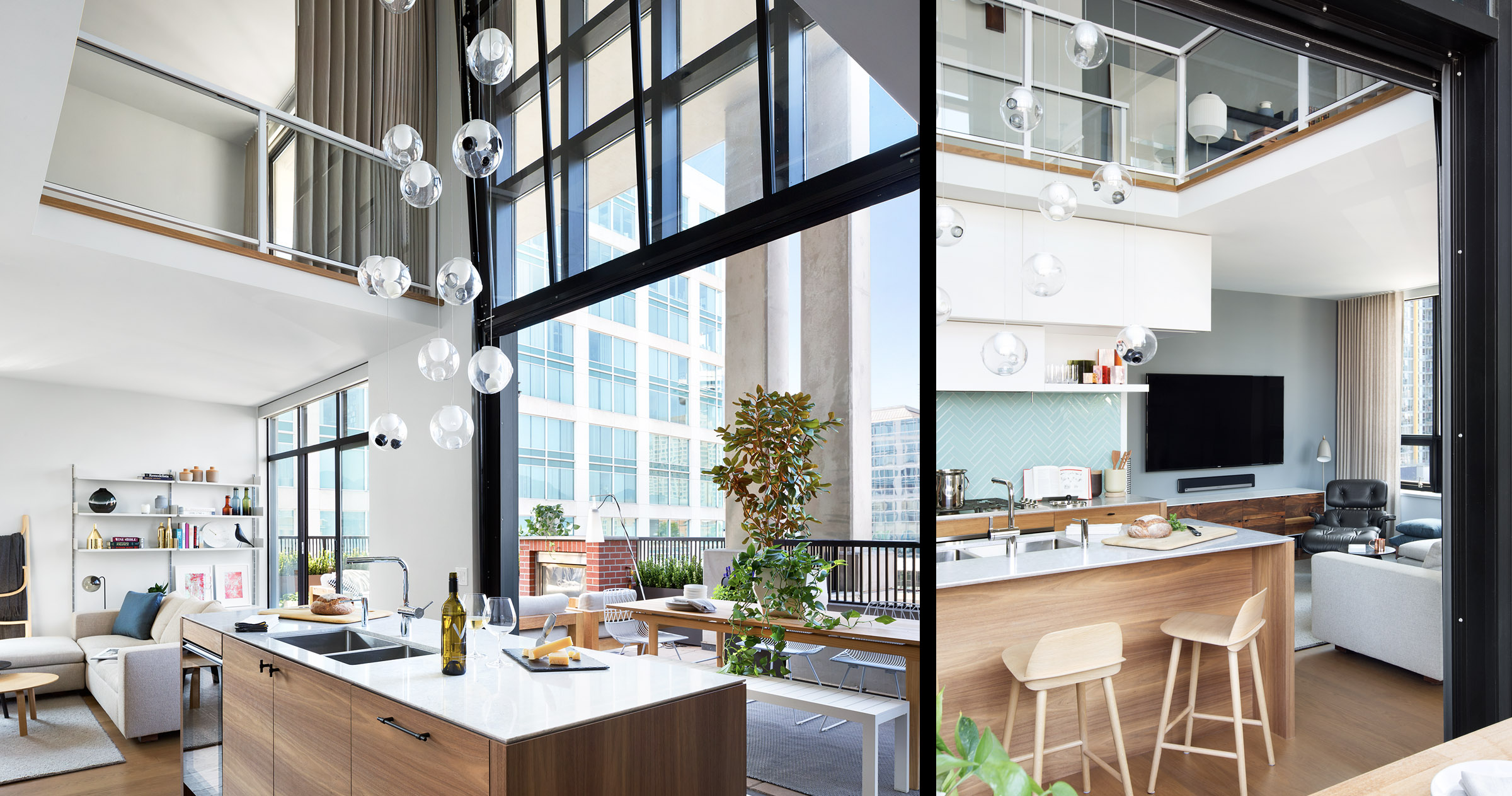 A Vancouver couple who are sports fans have their condo designed to allow them to watch events on TV from many angles.

A professional couple who divide their time between Vancouver and New York had two important considerations when it came to redesigning their Crosstown condo: having comfortable home workspace and great views of the television to watch sports.

The condo has about 1,100 square feet of space with main-floor living, kitchen and dining areas, an upstairs loft with a master bedroom and bathroom, and an outdoor deck that adds another 500 square feet of living space. The condo has huge windows and looks toward downtown Vancouver, with a view of the mountains.

“We tried to create a lot of work surfaces,” says Chad Falkenberg, principal at Falken Reynolds Interiors. “There’s the dining table outside, the kitchen island, which has good seating, the small dining table.” A quick shuffle, he says, and those temporary work spaces easily return to their original function. The designer also added a desk in the bedroom so there would be a permanent spot for work things to sit undisturbed.

The all-important television is on the main living room wall, visible from the kitchen and even the deck. “The big thing for them was: can they see the TV? They’re huge sports fans,” he says. “That was the centre of the project: being able to watch games and cook, and all at the same time.”

Falkenberg says he made only a few changes to the floor plan. To make the television more visible from the kitchen, he removed a small piece of wall beside the backsplash. The kitchen now connects more directly with the living room. To create a separate dining space, he removed a storage closet and eliminated the shower from the downstairs guest bathroom, turning it into a powder room instead. “In condo living, a lot of people don’t need a dedicated dining area if they have a kitchen island. But they wanted one,” he says.

The condo is a recent build: just old enough so that its rooms are still generously sized, says Falkenberg, new enough to have a contemporary feel. In the decor, the couple wanted to add mid-century touches and were eager to incorporate various types of wood. “In Vancouver, it’s so natural to do that,” Falkenberg says. “They wanted it to feel really warm.”

The wood console in the living room was made by local craftsman Jeff Martin. Instead of using kiln-dried wood, he air-dries his own wood, Falkenberg says. “It brings out a lot of colour variation; there’s more richness.” A custom sofa with extra wide arms provides seating for friends who visit to watch games, and there’s more space behind the sofa to pull in the kitchen bar stools.

The wood theme carries into the other rooms as well. For the ensuite bathroom, Falkenberg designed the walnut vanity, which looks like a repurposed mid-century piece even though it’s a new build. Downstairs, the powder room walls and floor are clad in a medium-toned wood that complements the walnut furniture.

Another important consideration for the homeowners was being able to darken the bedroom, often a challenge in a loft. Expansive windows are great for admiring the view, but are sometimes not so great for sleeping. Falkenberg installed draperies along the loft railing to provide privacy and control light. It also helps the acoustics, he says, eliminating some of the echoes that occur with high ceilings.

As in many Vancouver homes, the outdoor deck becomes an extension of the indoor living space. The 500-square-foot deck is both covered  and heated, so it can be used almost year-round. A fireplace and sofa seating area take up one half, and a large dining table with both chairs and bench take up the other half. As well there’s a barbecue and several planters so that the owners can grow herbs and vegetables. “It’s almost like having an extra two rooms,” says Falkenberg. •

A Show Of Confidence