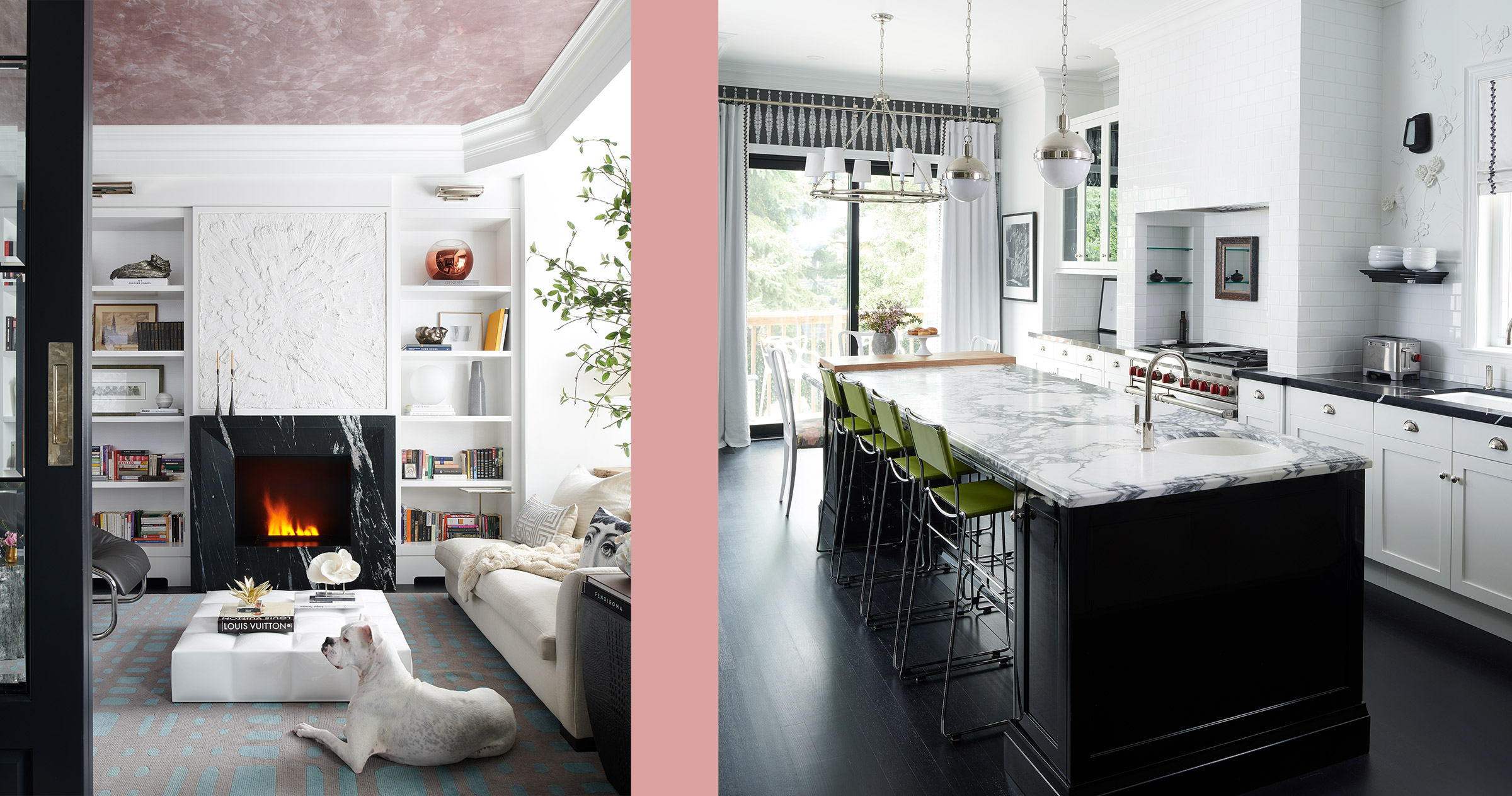 Toronto designer Svetlana Tryaskina loves creating exciting, new living spaces out of homes that have become lacklustre, outdated and no longer functional for their owners. Redesigning homes has been her passion and profession for the past 12 years. Of all the residential projects she has undertaken over the years, however, a recent renovation of a 3,000-square-foot home in Toronto’s Ledbury Park neighbourhood was especially close to her heart. The project entailed the complete transformation of the three-bedroom, two-storey home that she shares with her husband and their two children.

“I wanted a dramatic house,” says Svetlana. “Working from home creates situations where I sometimes have to invite clients and suppliers over to discuss a project. I wanted the house to represent my style. I wanted to be bold, to be fearless … for it to feel like a designer lived in the house. I didn’t hold back on anything. I was my own client.”

As the owner and principal designer of Estee Design, a Toronto-based boutique design firm, Svetlana says she has acquired a long list of favourite products, patterns, techniques and design features. Turning her own house into a personal calling card meant borrowing heavily from her favourite lists.

The two-storey house is relatively new; it was built 12 years ago. It has a traditional layout, but with extra-high ceilings. Typical of many Toronto houses, it is long and narrow, measuring 56 feet deep and just 17 feet wide.

Walking through the changes she made, Svetlana starts at the front door and the redesign of her home’s entranceway and stairwell. She calls herself a “wallpaper junkie,” and one of her favourite Cole & Son wallpapers is based on a pattern by Piero Fornasetti, a 20th century Italian artist. She says she knew the iconic cloud-like graphic in tonal black and white would set a whimsical, dramatic mood for the house while adding formality at the same time. A spectacular starburst light fixture on the ceiling adds to the sense of whimsy.

Adjacent to the foyer, through a set of French doors is the home’s main formal living area: adjoining living and dining rooms. In these rooms, Svetlana used Venetian plaster to harmonize the space. Long used in Italian homes, a modernized version of the old technique is made by VeniLux. In this case, it was applied to the ceilings with a mauve tint, adding drama and creating contrast to the room’s grey walls and white moldings. “It’s a luxury finish,” says Svetlana. “It’s not every day that you see it. It makes a big statement.”

The kitchen is next. Here the black-and-white colour palette is repeated. Black Eternal Marquina Silestone clads the countertops, while white subway tiles create a clean-looking backsplash. An Arabescato Carrara marble top on the kitchen island complements and completes the look. Together, it all contrasts beautifully with the home’s original wood floors, which have been refinished jet-black. A commissioned art installation – a five-by-10-foot plaster relief behind the kitchen sink – is a modern interpretation of a Chinoiserie pattern; it gives the room a one-of-a-kind wow. “I wanted to take the kitchen to another level,” says Svetlana of the relief by Anthony Valin of Rustik Design.

One of the last two rooms on the main floor is the family room, immediately adjacent to the kitchen. To connect the family room to the kitchen in an effortless flow, Svetlana once again turned to the black-and-white palette and wallpaper. “I needed an intriguing pattern that would add interest and depth to the kitchen and soften the blacks and whites,” she says, adding that the Schumacher wallpaper was perfect. She used it on the wall at the far end of the kitchen where there is a small breakfast table, and also in the family room. It brings warmth to the space without compromising the luxuriousness of the room.

Svetlana says she couldn’t be happier with how the design of her home turned out. And she adds that there’s an additional bonus in designing one’s own place. She says she often finds the end of a project bittersweet because she has to say goodbye and leave it behind. Here, in her own home, “I get to stay and enjoy what I’ve created. And I also see how my family are enjoying the space.” •