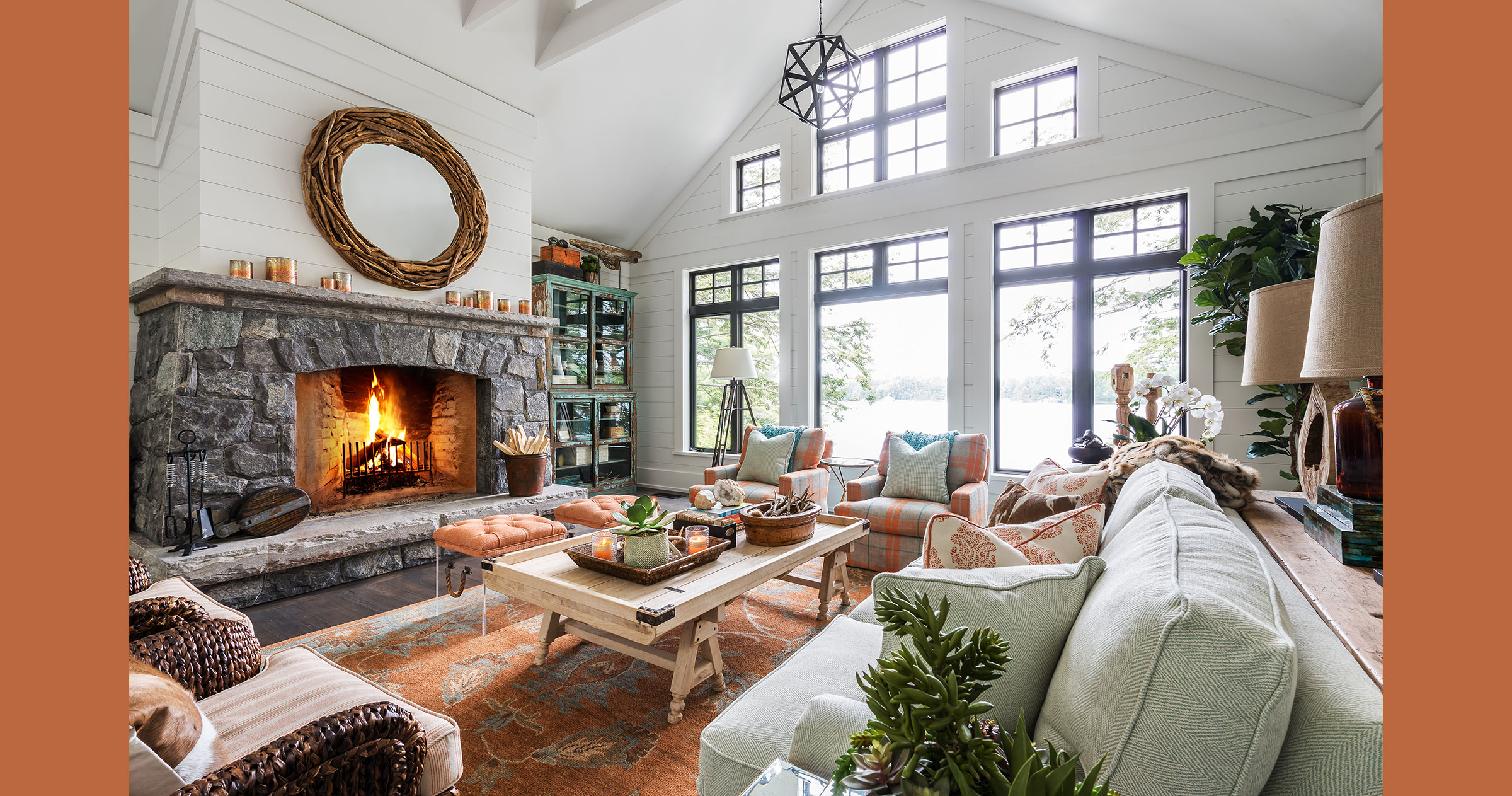 There’s turnkey, and then there’s turnkey. The owners of this home on Lake Joseph in Ontario’s Muskoka region presented designer Laurie Alter with a newly built but empty property and said, in effect, “It’s all yours.”

In 2019, Alter and her team from Tuvalu Home Environment in Laguna Beach, California were responsible for completely outfitting the place, both indoors and out: furniture, linens, soft furnishings such as drapes and cushions, accessories, lighting, deck furniture and umbrellas, cutlery and utensils, decorative elements such as vintage lifebuoys—everything, even down to natural sponges for the bath. About the only things they weren’t asked to provide were the boats in the boathouse.

Alter’s clients knew her work, for they had a home in Laguna Beach that had benefited from the Tuvalu touch a few years earlier, and they were familiar with Tuvalu’s two California stores. Alter and her team met them at the Muskoka property during the summer to discuss the project. The owners didn’t ask for a specific style, but they did want something different from their Laguna Beach house and different from neighbouring places on Lake Joseph.

“We had literally a suitcase with loads of different fabrics to start the design process,” says Alter. “We pulled out a few collections, and it was then that they gravitated to a warmer, burnt-orange colour vibe. Once that was established, they kind of let us loose. We . . . didn’t see them until the project was installed.”

And what a project it was: the main house of 3,800 square feet, the boathouse of 1,200 square feet with guest quarters attached, and numerous decks. The main house alone comprises a kitchen, living room, dining room, Muskoka room, powder room, in addition to two bedrooms upstairs and three downstairs, each with an ensuite bathroom.

All this had to be furnished and decorated for the clients and family and friends to walk in and feel right at home, just in time for Christmas.

“When I saw the place, it was pretty much completed,” says Alter. “The builders were finishing the Muskoka room.” She says that the only structural change she suggested was to reconfigure the kitchen and add vintage pendants to make it more functional. Once that was done, the empty house awaited.

The result is all about comfort and accommodating a crowd. One easy furnishings decision was two custom-made sets of bunk beds in each of two of the bedrooms, ready for visits from the owners’ large extended family. The living room and the Muskoka room both feature generously proportioned pieces for seating. Outdoors, there are multiple lounging and seating areas spread over several decks.

The Tuvalu team started sourcing items for the home over the summer. Most came from Tuvalu or were ordered from trusted suppliers, but Alter and team also had fun visiting stores and flea markets in a wider area. Round Top, Texas is famous for flea markets and antiques shows, and there Alter was particularly excited to find two original Stickley rocking chairs. She and the team also visited stores and markets in the Muskokas, finding accessories and art with a local flavour.

Alter calls the resulting style “contemporary rustic cottage.” It combines antiques such as the Stickley chairs, rustic elements such as cow-hide rugs, and decidedly contemporary items such as the clear acrylic stools near the fireplace in the main living room. The look is “timeless but unique,” says Alter, “as though the furnishings and accessories had been collected over time.”

A constant throughout is colour and texture. Alter based the colour scheme on shades of orange, ranging from soft and faded in the living room through to bright tangerine on the decks. In some rooms it’s taken even further, going into decisive red. Many rooms have blue accents in the same manner, gentle in the living room and amping up into brilliant turquoise in the boathouse guest quarters.

The texture story is also varied. In the master bedroom, grasscloth on the walls provides subtle texture. The look of twig-framed mirrors, rattan and bentwood seating, and rustic cabinets is softened over-all by plumply upholstered furniture and plentiful soft furnishings, with rugs and cushions throughout the rooms.

The process of preparing the country retreat was demanding, because of its distance from stores. Alter and her team of five employees eventually moved into a local hotel in late autumn and worked full-time on the project. The weather did not necessarily cooperate: Alter recalls heavy snowfalls that required the driveway be plowed twice a day so that delivery trucks could get in. But she and her team completed their mandate, putting the last touches on the house right before Christmas.

She remembers the snow and the trucks and all the sourcing of items, but mostly she remembers the joy of being let loose to do a whole property from scratch. “We like to take chances, which sometimes clients are unsure of,” Alter says. “They have concerns because they can’t see the end project. . . . It truly is a designer’s dream to have such trust to let us work our magic and not be limited.” •