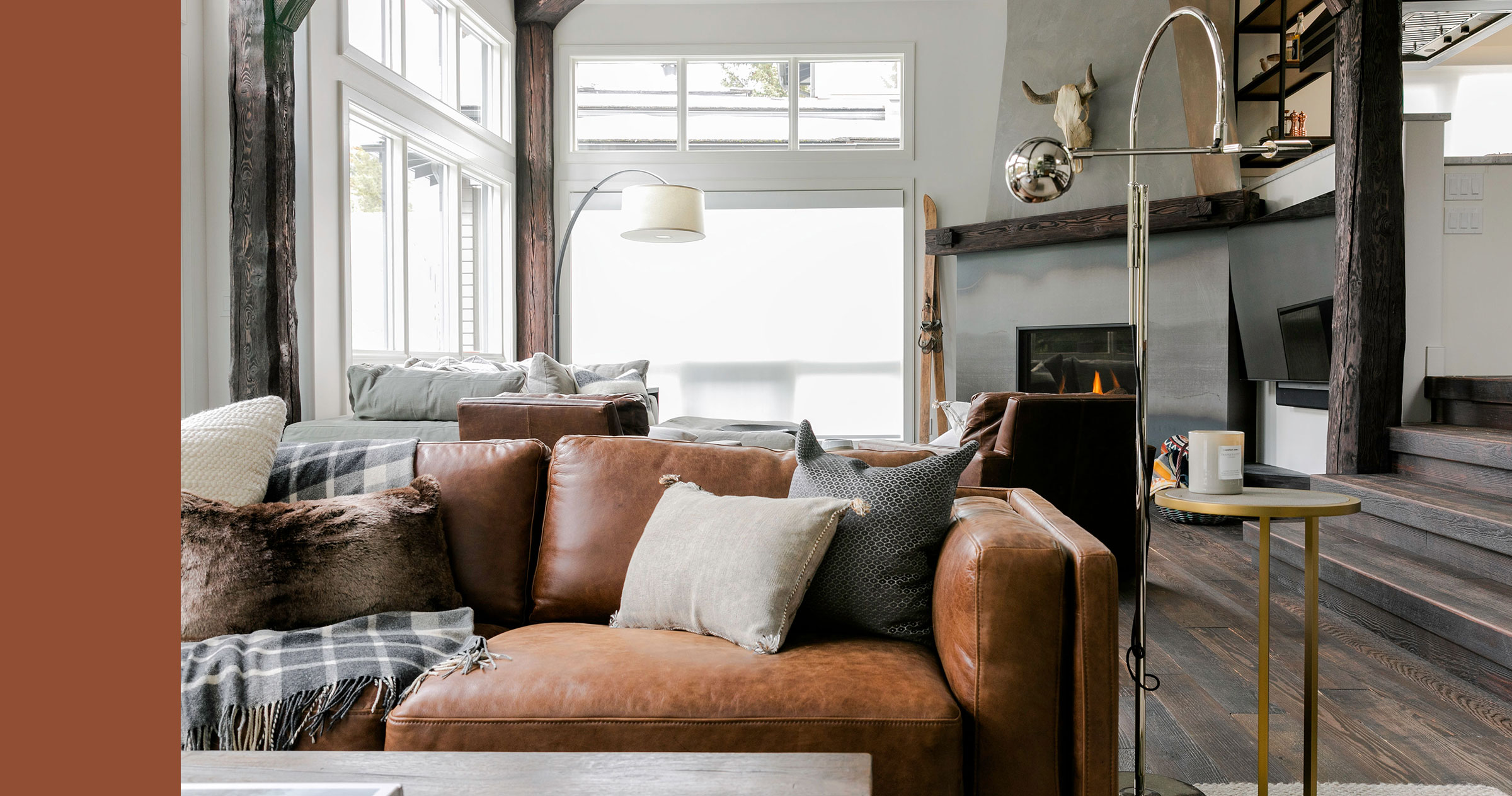 Mike Mendelman and Jolene Brewster have good taste. That statement can be taken literally: Mike is a restaurateur with 15 restaurants in Banff, and Jolene has her own company importing and blending teas. But it’s also demonstrated figuratively in the attractive yet relaxed and unpretentious decor of their most recent home in Banff, achieved with the help of FRANK Architecture & Interiors.

When the couple, their two young children and Blu, their black German shepherd, needed to move two years ago, their choice of houses was limited. The housing market in Banff is unique, governed by a “need to reside” policy, since the town is within the confines of a national park.

As a result, says Mike, “there are no holiday homes, no second and third homes owned by [non-residents]. The market is driven by people who live and work in Banff. There’s a rental market for those who work in the hospitality industry, but [when it comes to ownership] most properties are generational. They don’t often hit the market; instead, they get passed down.

“When Jolene and I were looking, there were few very nice recently built single homes in Banff, and only three or four streets that offer single-family homes,” Mike says. This house was built in the 1990s with a design aesthetic of that period — in a word, it was dated. But they could see beyond the surface.

“We walked around this house probably 10 times,” he says. “We really do like the bones, and I love the feel of this property. It checked a lot of boxes, for good views, good location, not being a teardown.”

The house might not have been a teardown in the strictest sense but, while the exterior was left barely changed during the renovation, the interior’s 3,000 square feet were gutted and rebuilt with more efficient heating and infrastructure. In its newest incarnation, the home has three bedrooms with ensuite bathrooms upstairs. The bi-level main floor is comprised of a great room, kitchen, and guest bedroom. The walkout basement features a small rec room.

To propel their newly purchased home’s design into the current millennium, Mike and Jolene turned to Kelly Morrison, principle and founding partner of Calgary-based FRANK Architecture & Interiors. The company had designed Mike’s last four restaurants. “We have a really good working relationship,” says Mike. “They really listen. I think they produce great work.”

Morrison and team were tasked with producing a home in what Mike and Jolene call “mountain modern style.” The designer trod a careful line: honouring the couples’ wishes for a contemporary Banff style while avoiding the clichés of traditional Western decor, all the while incorporating elements that reference their backgrounds and lifestyle.

Morrison’s design doesn’t entirely eschew classic architectural details from the area. The great room is long and linear, with wooden beams to define areas. These are rustic timber accents, but they’re not the standard pale, peeled-pine poles; rather, they’re squared-off dark-stained wood. “The construction crew hand-sawed those posts to get a textured, rugged finish,” Morrison says. Mike adds, “A very talented European craftsman worked for [what seemed like] 100 days in a row, eight to 10 hours a day, chiselling away at squaring the logs.”

There’s more texture underfoot from deeply grooved old flooring salvaged from Montana. At Jolene’s instigation, a chair with a curvy frame hangs in one corner of the great room. Fake-fur pillows are scattered on various sofas and chairs.

In the kitchen, the black La Cornue stove’s trim is a striking element, while pulls and doors have a tactile finish for a rustic feeling. The dining room banquette is upholstered with a textured Pendleton blanket, and the dining table has rabbeted joints and a rustic-looking finish.

There’s no Western-style overkill, however. For instance, in the stairwell, the white-painted shiplap walls share their linear effect with the stairway’s handrail and balusters, but the stairway elements are square, black powder-coated metal.

This black-and-white scheme continues, in a slight departure from the public rooms’ aesthetic, in the master bathroom. Here the style is sparer, brighter and high-contrast. Nonetheless, it does have touches that tie in nicely with the rest of the home. The black plumbing fixtures reference the La Cornue stove downstairs and have just enough curves and detail to hark back to more traditional styles. The substantial vanity is wood, which, along with slightly retro-looking sconces, warms up the room.

“The home is an eclectic space, very Banff, not pristine and polished,” Morrison says. Mike adds, “Design is something Jolene and I are both passionate about. In Banff there are very few modern takes on mountain homes.” Referencing the details such as the dark squared-off posts in the great room, he says, “It’s a highlight, that juxtaposition of warm mountain aesthetic married with modern. Without that, I don’t think the project would have been so successful.” •