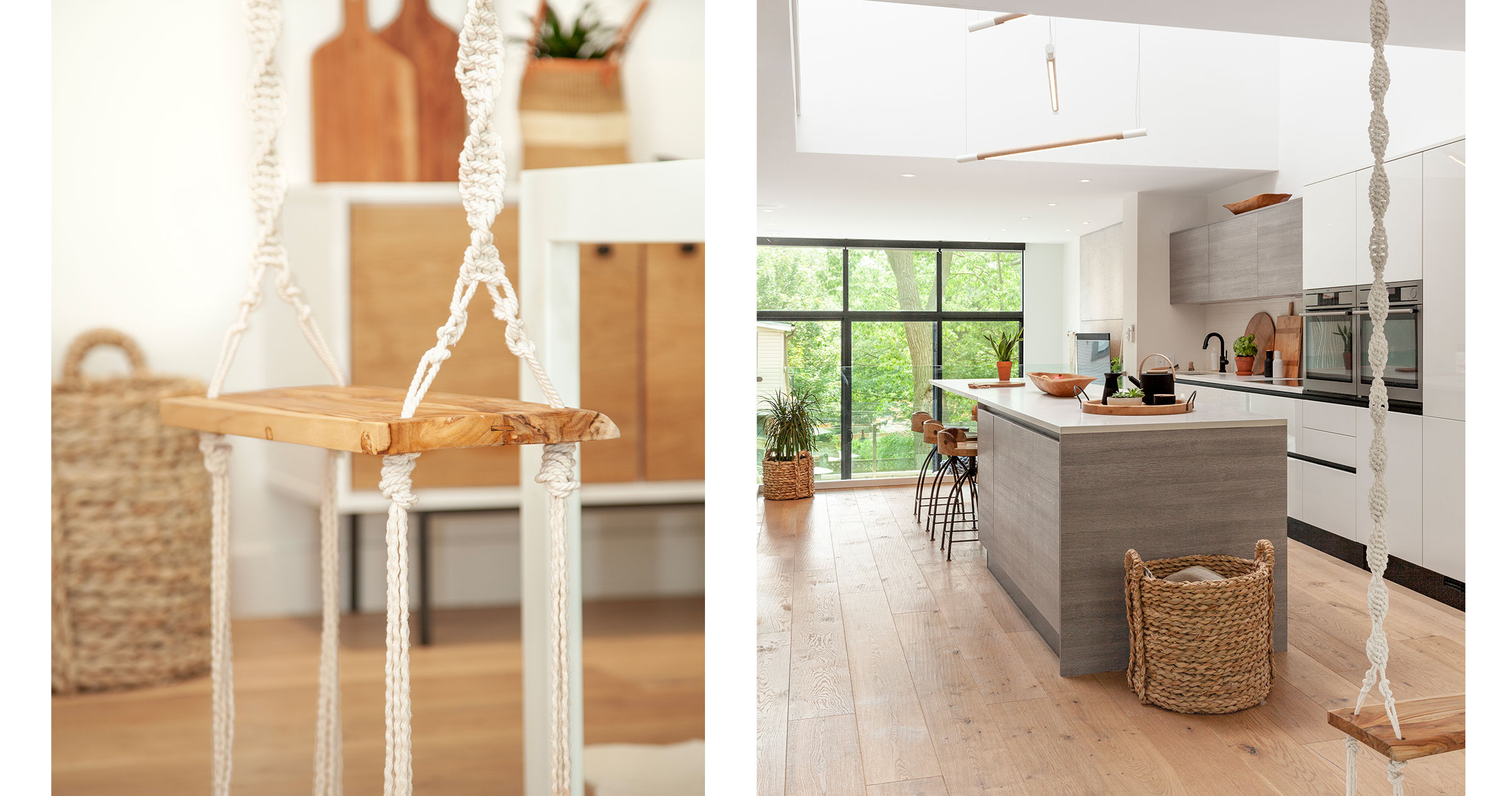 Swing by for Dinner

A couple integrate playful design elements into their home, including a playground swing

At first glance, the kitchen in the home of designers Azen and Kevin Bongard in Toronto’s Beaches neighbourhood looks lovely but fairly typical. It has a cooking zone, an island with counter seating, a dining table …. and then you notice it: the macrame rope and wooden swing that makes up one seat at their table.

“We like trying fun, new things,” says Azen, the lead designer for Studio 8 Design. “We wondered, ‘Is anybody going to use it?’ But that’s the seat everybody fights over.”

“The kids will come sit on the swing and talk to us while we’re cooking,” says Kevin, the firm’s principal. “If we just had a dining chair there, nobody would sit there. The swing becomes a destination.”

It can be a good option for children who have a hard time sitting still, Azen says. “It’s not like we’re giving big pushes on it, but it’s amazing what a wonderful feeling it is; almost calming.”

Their home serves as both a design incubator and showroom for their firm, and the swing definitely gets noticed. Azen says they happened to find it through one of their regular suppliers, thought it might be cool, and ordered three different types. A larger rope swing and a chair model found their way to upstairs bedrooms, and the playground model ended up in their kitchen.

The swing, like finding the home itself, was serendipity. The couple had been house hunting in the neighbourhood for years until one day they spotted a home under construction not 50 steps from where they had parked. The outside shell was built but none of the interior finishes were in yet. Given their design background, this meant they could make it anything and everything they wanted it to be. “We love modern design but like things that are more natural,” Azen says. “Modern can feel cold, and we wanted it to make us feel relaxed and comfortable.”

For their cabinetry, they chose Scavolini both for the look, and also for what Azen calls “next level features.” Those include such things as custom cutouts in the drawers for cooking utensils as well as integrated lighting that goes on as the drawers are opened. The glossy white and wood-tone cabinets have integrated handles and are accented by a strip of black metal both under the countertops and above the floor.

Upstairs in the master ensuite bathroom, they again chose Scavolini cabinetry for the vanity, along with a countertop that slopes down into the sink, all in one piece for easy cleaning. “We wanted that exact vanity,” Azen says, “so we needed to make the finishes work around it.”

But the main feature of the room is the quartz soaker tub. “We fell in love with that tub when we saw it,” Kevin says. “The contractor didn’t realize how heavy it was.” After trying to figure out how many people it might take to carry it upstairs and how much damage they might do with it along the way, they got a crane to take it to the third-floor deck and carried it inside from there.

There’s also an extra-large shower – 42 inches by six feet 10 inches – with enough room for a Caesarstone bench that’s mounted into the wall. “More and more people want elements that aren’t just nice to look at, but functional as well,” Azen says. “It’s nice when you have a shower big enough that that area is not getting splashed all the time.” •

Originally published in the Kitchens 2020 Issue.