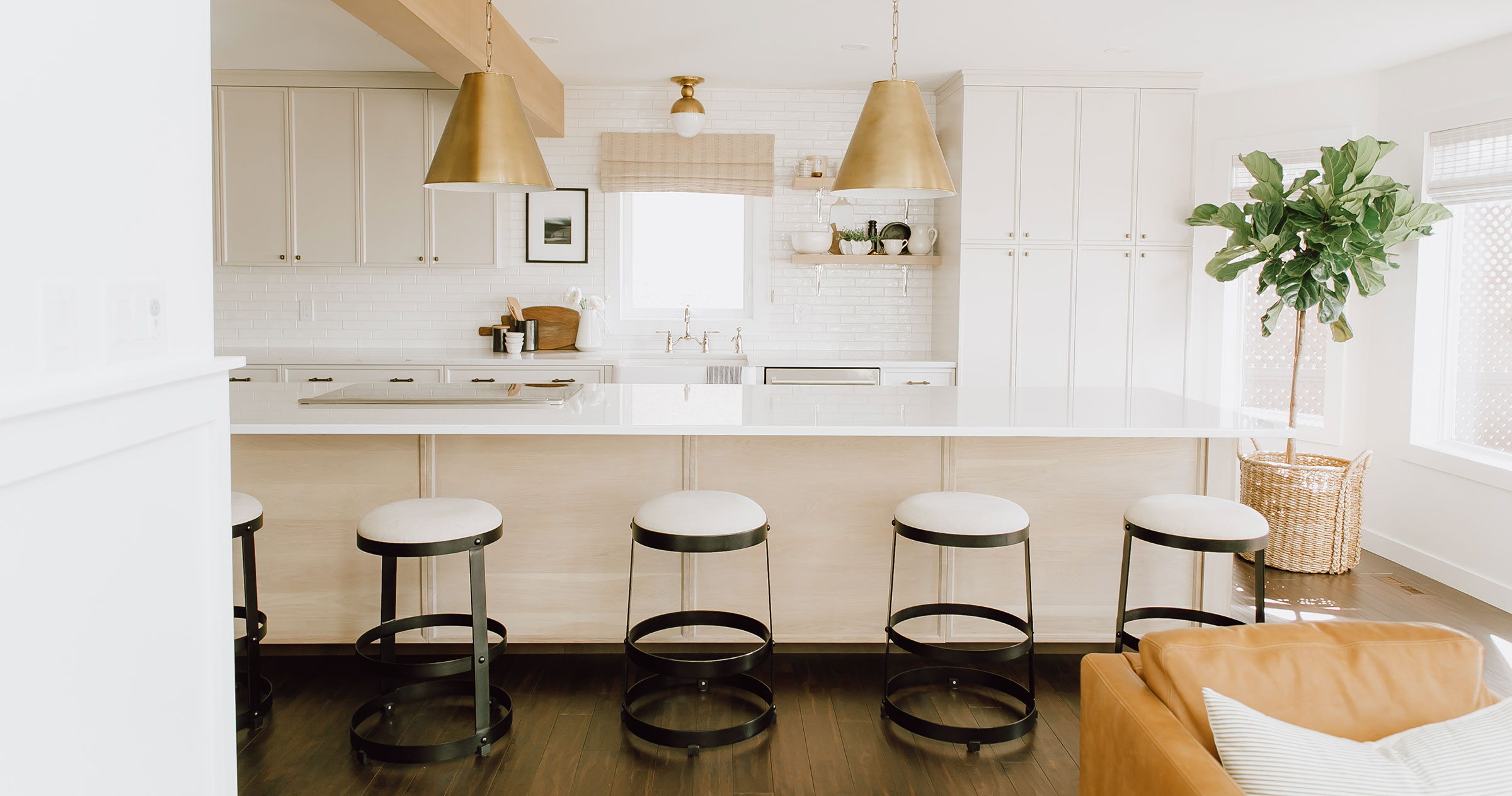 It is widely accepted that no man is an island, but can the same measure be applied to a kitchen? The answer depends on the kitchen – and the island, of course. But before weighing in, walk into the kitchen space re-imagined by Winnipeg designer Jaclyn Peters. Oh, and leave your old yardsticks at the door. They have no use here.

Let’s begin with “bold,” “bright” and “big.” These are the descriptors that begin to measure what you see. But as you make your way closer, other words enter the descriptive lexicon, adding breadth and dimension. Let’s just focus on two: “long” and “luxurious.”

“We sit here sometimes and we can’t believe this is our kitchen,” says the owner of this suburban two-storey home that she and her husband purchased in 2000. “I find I have more room. It’s just more spacious. It’s a lot brighter. Everyone likes to sit around the island.”

The gravitational pull of the island is undeniable. Made of white oak finished in a custom light stain, it is a stunning 12.5 feet long and 40 inches wide. It stands on tapered bronze veneer feet and has a white quartz countertop. The rows of bronze pull handles along one side give the piece a dazzling finish while offering a clue as to the ample storage space it provides.

“I wanted it to read as a piece of furniture,” Peters, owner of Jaclyn Peters Design, says of the island, explaining her decision to put it on a raised footed base.

The light oak look not only “pops off the dark floor,” which was part of the original kitchen, Peters says, it contributes to the brightness of the space.

Not taking away from the island’s grandeur, it is oddly not the owner’s favourite feature of her new kitchen. Months after the project’s completion, she still loves her sink.

The white apron sink below the window is adorned with a brushed nickel bridge faucet by Brizo. The faucet, with its unique architectural flair, adds a distinctive touch, while playing off the bronzy metal accents that are found throughout the space. “I never envisioned getting something like that,” the owner says of the sink’s hardware. Jaclyn just opened us up to so many things.”

The designer describes the faucet as “different and interesting.”

“It gives a little character to the kitchen,” she says. “It has a different shape.”

Features such as the faucet and brass fixtures also serve a function, Peters suggests, allowing the eye to move around the room, dictating the flow.

“I wanted something with a bit of shine and sparkle,” she explains, referring to the metal accents. “They reflect the light around the room and tie in with the feet of the island.”

The homeowner acknowledges the design process pulled her out of her comfort zone, a journey she appreciates enormously in retrospect, saying that the results are more than just the sparkle and shine. The redesign added character to her home, a space that enhances everyday moments and entertaining events. “Everyone hangs out in our kitchen. It’s a very big part of our main floor,” she says.

From “the window treatment, the pendants, the brightness, the floating shelves, the long island, the cupboard space – I love it all,” she says. Then she pauses and restates her claim: “I love it all.” •