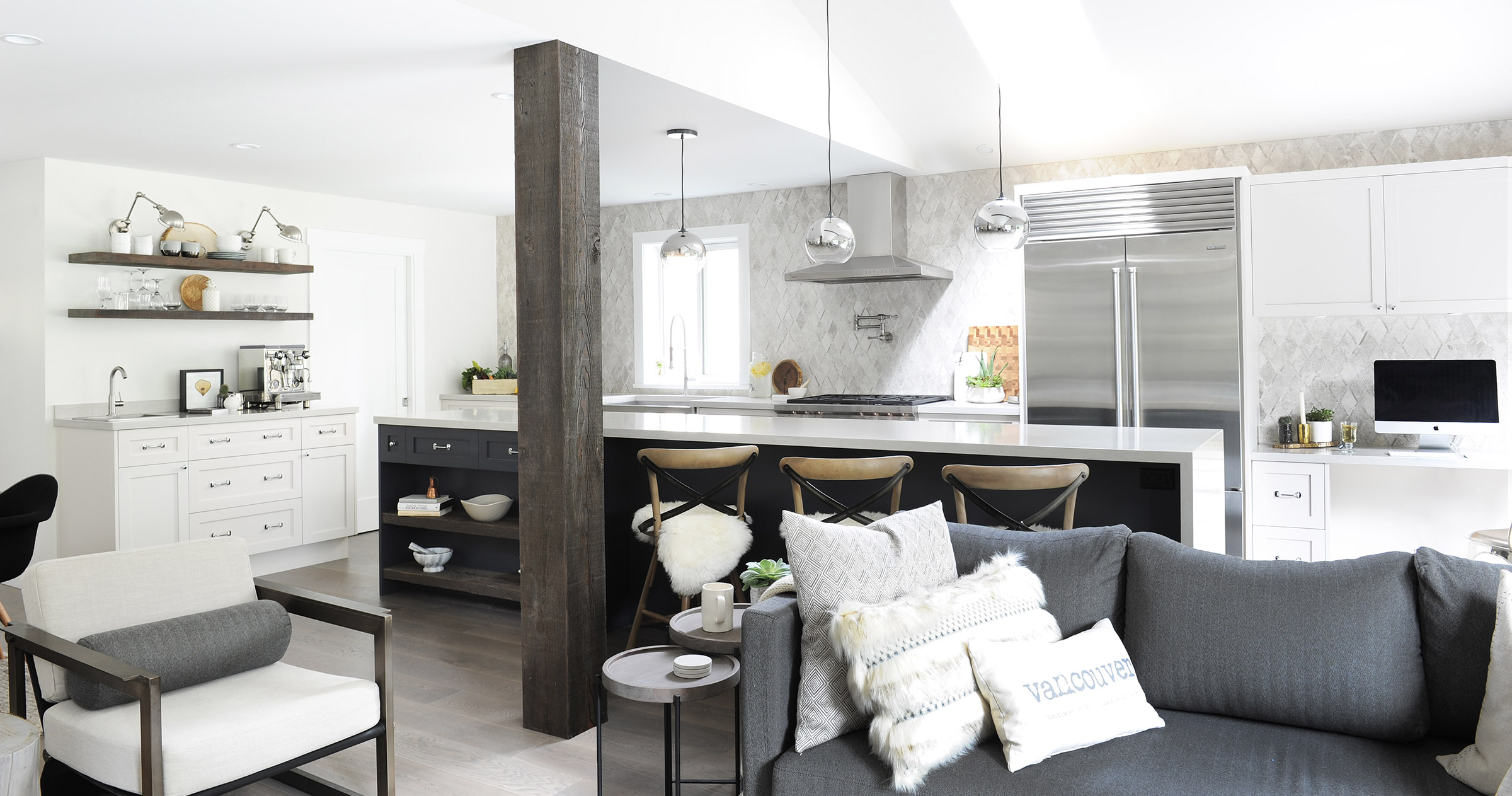 Undertaking a renovation is always an opportunity to raise the bar – to improve the layout, the look, the style, and functionality of a home. But when a renovation affords the occasion to raise the roof, well, that’s a game-changer.

If you need proof, just look at what interior designer Sarah Marie Lackey did with this home in North Vancouver’s Lynn Valley. She didn’t actually raise the roof, but she certainly did not hesitate in vaulting the ceiling to re-imagine the living space in this home, which is owned by a family of four. “I wanted to bring the outside in,” Lackey says, referring to the sense of height and openness. “I wanted the warmth and light.”

The living room area originally had eight-foot-high ceilings, explains Lackey, principal at Sarah Marie Interior Designs Inc. But you would never know it. The 2,800-square-foot home, which has three bedrooms and three bathrooms, now has a light-filled open-concept main floor with a soaring ceiling. The light that streams in from the large living room window and a skylight over the large custom-built island accentuates the sense of openness. The original design of the house, which had all the space on the second floor located in front of the house, made vaulting the ceiling on the lower level possible.

“North Vancouver is very treed. It’s majestic, but dark,” Lackey says, explaining how the house needed to welcome the light.

The need for height was also inspired by the man of the house. Measuring well over six feet tall, he insisted on not having any upper cabinets in the kitchen. He found them too cumbersome when preparing meals. “He found it annoying when he cooked,” Lackey says, explaining how he wanted to eliminate the elements that were in his way. This meant that almost all the storage area had to be incorporated into the island.

So, here too, they went big. The island, fitted with a quartz countertop, measures 12 feet long, and is illuminated with three round clear glass globe pendant lights. It includes a substantial amount of storage area, all fronted by blue Shaker-style doors and drawers. This space is Lackey’s favourite area in the house.

“The kitchen is so well laid out that you can have a lot of people in it without getting in each other’s way,” she says. The size and scope of the island “gives guests designated seating. It keeps people out of the working space but in the kitchen.”

Lackey also likes the separate counter space, adjacent to the island, which features a coffee area complete with its own sink. It combines convenience with an element of indulgence.

The home was given a rustic theme, with wood elements sprinkled throughout the main floor. Lackey and her team, which included project contractor Stanhope Projects Ltd., used these tasteful rustic touches to set the tone. They include the support beam at the edge of the kitchen that is clad in barn board. The finish was replicated on the steel beam that traces the peak of the vaulted ceiling in the living room.

Distressed barn wood was also used in the floating shelves mounted to the wall above the kitchen’s coffee station, on each side of the fireplace in the living room, and incorporated into the outer facade of the island, where cookbooks and other display items are showcased.

The rustic theme is also reflected in key furniture selections, including the round-backed stools with crossed metal braces along the island, which “really tied in that rustic feel,” Lackey says. The coffee table, fashioned out of a metal drum, is another example. “There’s a bit of everything in it,” Lackey continues as she describes the overall look of the interior. “It’s West Coast transitional.

“The big trick to open-concept is keeping in mind storage. You want the illusion of owning essentially nothing,” she says, highlighting the need to do a thorough inventory during the planning stages of everything that is needed and used regularly to ensure that it all has a place that is convenient and out of the way. •