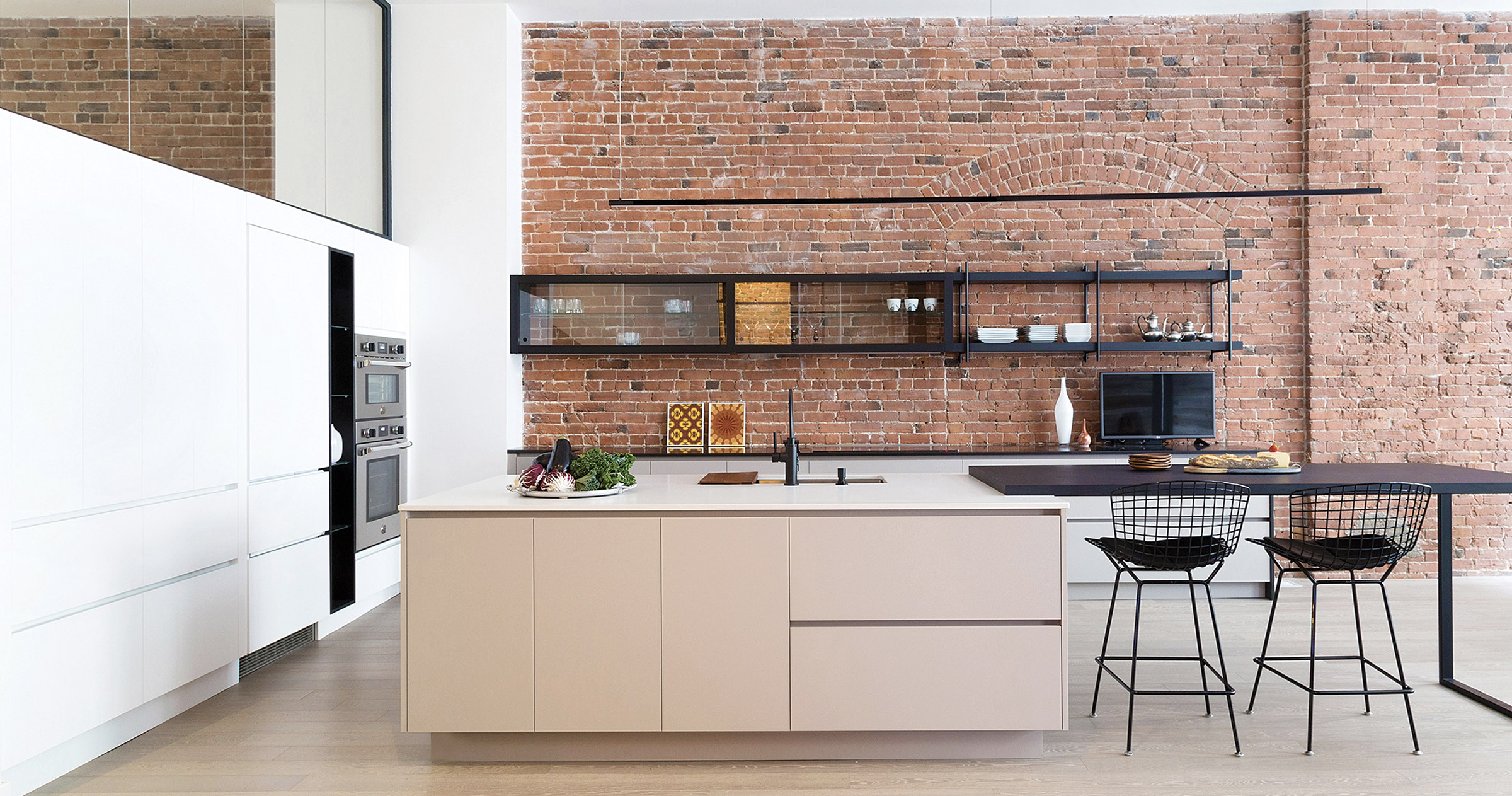 Tucked away in the heart of Old Montreal sits a well-preserved and award-winning Victorian building constructed in 1865. Originally an upscale hardware store, the space was transformed into 30 loft-style condos in 2001. Fifteen years later, Cuisines Steam lead designer Marie-France Elliott was called upon to reimagine a new kitchen for two lofts that were being combined into a sprawling, light-filled space with bleached oak flooring throughout.

“The client was extremely detail-oriented with a discerning eye, so she was very involved in every stage of the design,” says Elliott. “She and her spouse entertain often, so it was important to have good flow. They also have three children and several grandchildren who visit often, so they wanted a functional yet welcoming layout.”

Because the client knew exactly what she wanted, storage and work zones were carefully planned to maximize efficiency. The loft’s original kitchen was much too cramped for the homeowners’ lifestyle, so a wall between that space and the old dining area was removed, allowing Elliott to expand toward the condo’s floor-to-ceiling arched windows.

Although situated in roughly the same spot, the new kitchen was re-oriented so that it stretches along the 20-foot brick wall, drawing attention to its texture and patina. However, that lovely wall brought its own set of challenges, Elliott says.

“It was important to the client that the kitchen appear to be floating, which meant having strong support on that wall to hold the cabinetry, but because it’s a very old building, that wall was not very solid structurally,” she adds. “Plus, to further emphasize the beautiful brick, the upper cabinets have no back, which made it even more difficult to have the proper support.”

To solve these issues, Elliott’s construction team incorporated tubes within the black framing of the cabinets. Beside the glass upper units, the stained wood shelving is framed by a black steel structure that hides the anchors required for the installation.

Another design conundrum involved a load-bearing wall with a large window overlooking the adjacent bedroom. “That glass is supported by several columns, which were important to the structure of that wall,” Elliott says. “But because that space also contains cabinetry, the refrigerator and freezer, plus the wall ovens, we had to incorporate and hide the columns so the whole area is balanced and sleek, with one continuous line. It was a lot of work, but it was worth it.”

The oversized island features clean lines and offers storage on both sides, which was on the client’s must-have list.

“She knew exactly where she wanted to put everything, so all her appliances and dishes had a specific spot according to their measurements,” Elliott says. “If your kitchen is spectacular but your Vitamix doesn’t fit anywhere, it’s useless for your lifestyle. It’s important to have exactly what you need.”

White and beige acrylic lower cabinets have molded joints around the facade to ensure longevity and high performance. Above the island, an industrial horizontal light fixture hung from thin wire accentuates the 12-foot ceilings while providing illumination that works well for food preparation or working on a laptop, she says.

Elliott says there are many small details a casual observer might not see, such as how the floating table sits atop the island. “We found a way to integrate it so you can’t see the structure; the U-shaped legs turned out well, and depending on which angle you look at it, they look thicker or thinner,” she explains. “I’m really proud of this space.” •

Photography: Tracey AytonStyling: Paulie Dhillon Effective communication does not need to be loud. Just as beauty need not be bold....

A perfectly designed kitchen makes a house a home, whether it’s an expansive area with an oversized island or a...