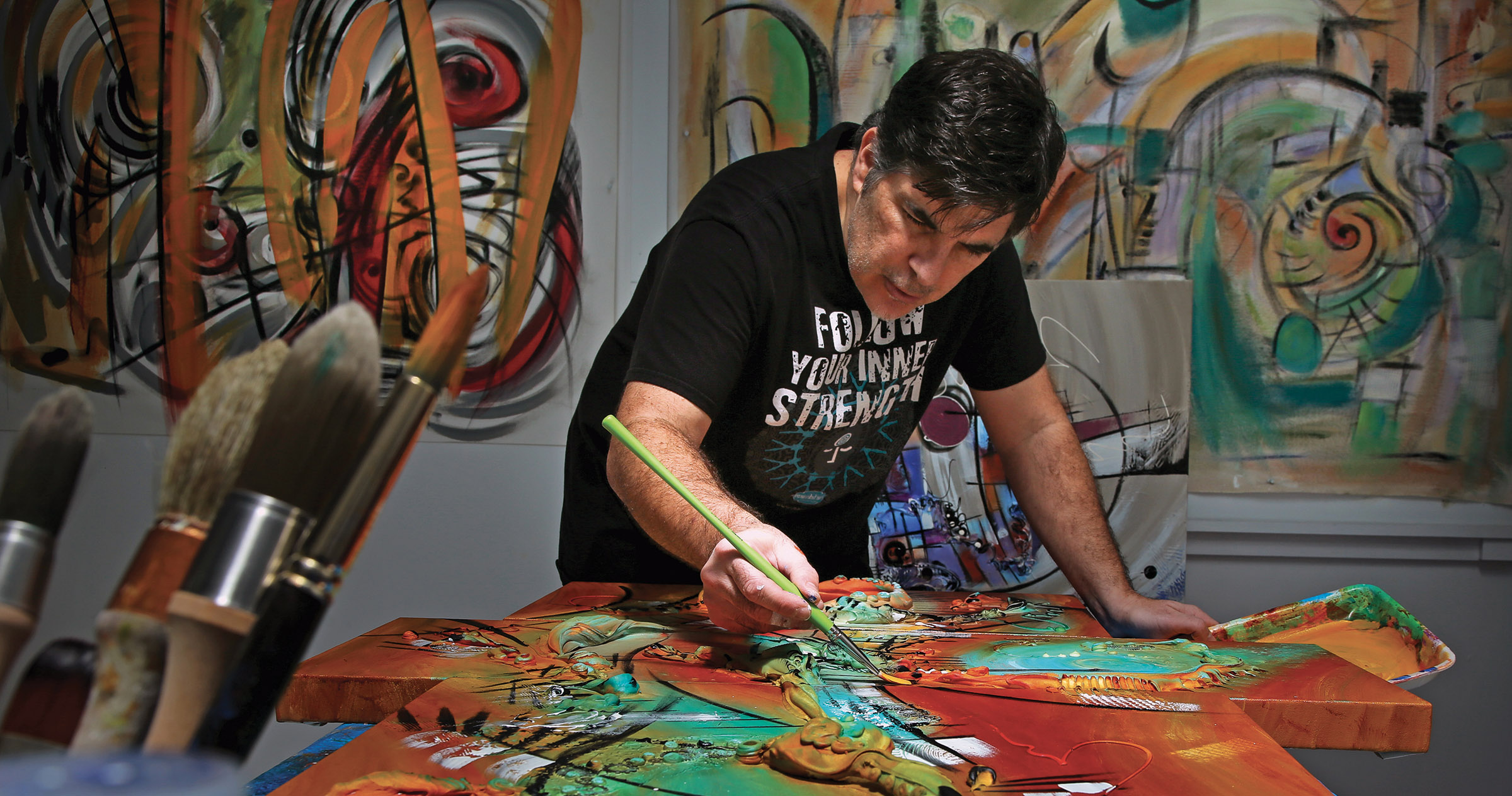 Hughes’s paintings depict rich, vibrant, electrifying colours – turquoises, reds, greens and yellows – that co-mingle in the glorious abstract designs he creates in the workshop attached to his Saint-Basile-le-Grand home in Quebec’s Richelieu Valley. “For me, colour is happiness,” he says. “When there’s colour, there’s a good feeling and that’s what I paint.”

Synesthesia, of which Hughes has a form, is a phenomenon in which the stimulation of one of the five human senses leads to the perception of the stimulus by another of the senses: seeing sound, for instance, or hearing colour.

Hughes uses music to guide his artistic creations. “I am inspired by music; it is a catalyst for me,” he says. “I use music to help me create art.” As such, music has become very much part of his artistic process and he listens to jazz and instrumental music while painting his abstract contemporary canvases.

Since his work reflects his internal emotions, he calls his art “instinctive” – a kind of freestyle painting that has become his personal signature.

Hughes got his start in the art world early in life. He remembers winning a drawing contest when he was 11, which encouraged him to pursue what was quickly becoming a passion. At the Cégep du Vieux Montréal, he studied graphic design and then opened a graphic design studio upon completing his studies.

There were frustrations, however, in doing graphic design jobs for businesses but not having the freedom to pursue his art in the way he really wanted to. So he started to paint and run the business concurrently. Eventually, he got out of the graphic design business so he would be freer to follow his art ambitions. In 2000, he decided to go back to school, and took a studio art program at Bishop’s University. “I wanted to pursue art more seriously and that seemed to be a good way to do it,” Hughes says. That’s where he learned about various styles of art and where he discovered his own style, he adds.

He knew he wasn’t going to be a figurative artist. “You don’t usually recognize things in my paintings,” he says. “It’s all about internal emotions, free-flowing thoughts. It’s like embarking on an adventure into the depths of my subconscious.”

Hughes describes his art as exploration. The music that inspires him also helps him to see the vibrant colours that characterize much of his work. He mainly relies on acrylic paint, but sometimes incorporates collage into his work. The paintings sell for between $1,000 and $5,000, depending on the size.

Only his collection of drawings is more subdued and more figurative. But most of his collections, even as they have evolved over the years, share the same defining use of vivid colours and dynamic lines and swirls that seem to transport the viewer inside a kaleidoscope.

Each of his collections represents a period in what Hughes calls his “visual exploration.” And each has its own peculiarities. His Catharsis collection is geometric, whereas the Delirium collection is more lyrical. Another collection, called Symbiose, is a mélange of the styles of the two previous series of paintings, attesting to the artist’s natural evolution and pictorial research.

Hughes’s latest collection is called Introspection and his goal is to start selling it outside of Quebec and expand to Toronto, then New York and Europe.

In 2015, he was exhibiting alongside another artist, Patrice Dufour, and the two decided it could be interesting to meld their very different styles into unique pieces together. Their new collection, Amalgam, will be exhibited at l’Artoteque de Montréal from March 13 to 24, and Hughes is excited about their collaboration. “His style is more textural and organic, but it has been a real adventure painting together,” he says.

With a wife and two teenaged children, Hughes says one of the challenges of being an artist is to leave all the distractions of everyday life and focus on his craft. “Bravo to the people who have the courage to do that, to follow their passion,” he says. •

To view the works of the Hughes and Dufour collaboration, go to www.hughesetdufour.com