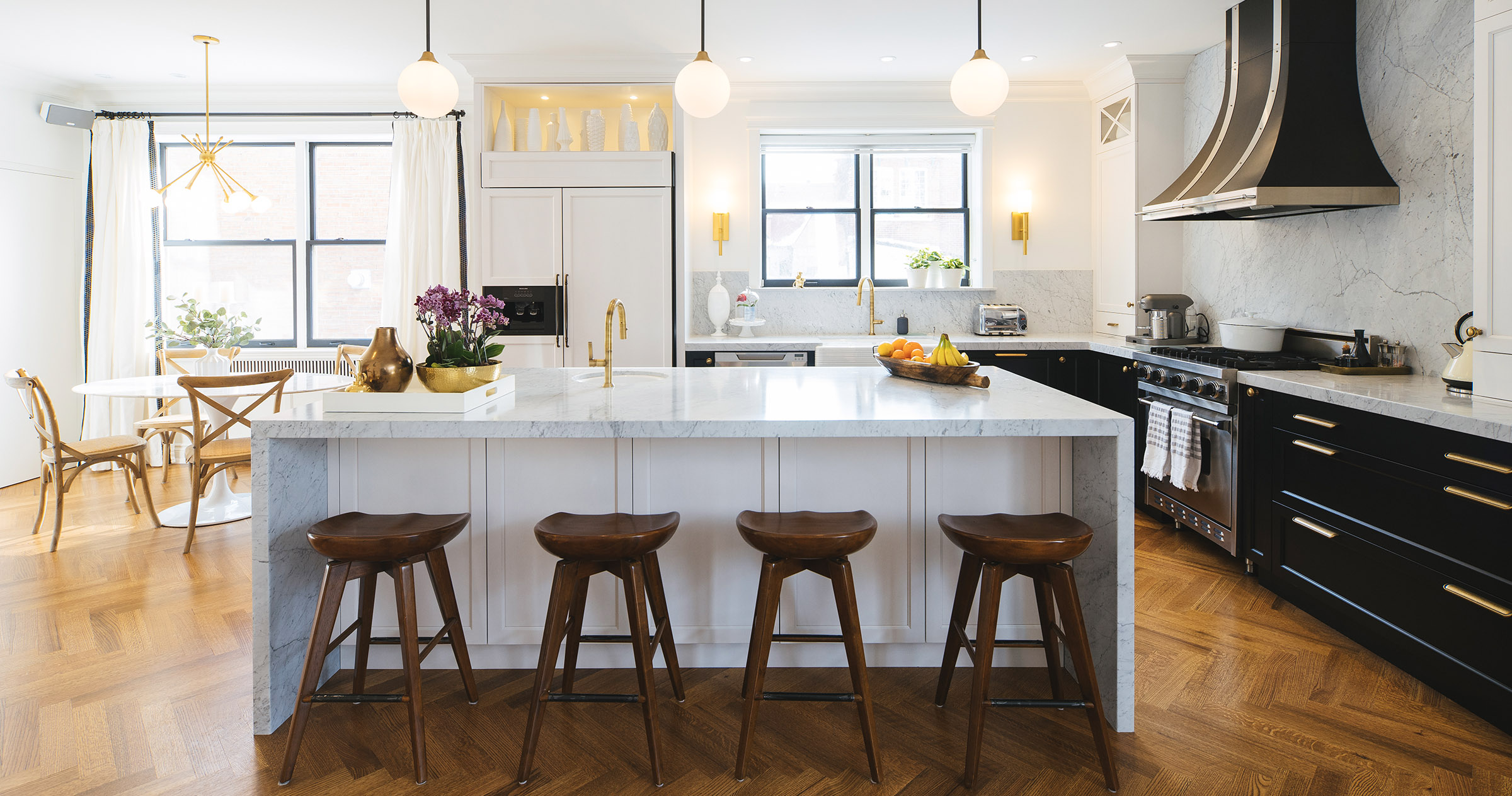 The renovation of Diane Bélanger’s detached cottage in Notre-Dame-de-Grace was similar to other projects of its kind: she and her husband wanted to open up the space to make entertaining family and friends easier and more fun. The cottage had already been renovated once, a decade ago, to convert it from an upstairs-downstairs duplex into a single-family home. The second renovation was now going to create a more open-concept plan on the lower of the two levels.

“We knew what we wanted; it wasn’t our first renovation,” says Diane. The first renovation of the 1940s duplex had situated the kitchen, den, living and dining rooms on the main floor, and the bedrooms and bathrooms upstairs. She says their hope for the new renovation was to improve the flow between the main-floor rooms, and to create a more modern, as well as welcoming ambience, in the space. “We are 26 when the family gathers,” says Diane. “We had been thinking of buying a cottage for many years but when we got around to looking seriously at it, we realized maybe the time had passed. The kids were older. We thought: ‘Why don’t we turn our home into that gathering place.’ ”

Recognizing it was a complex project that would require removing load-bearing walls and reconfiguring the existing rooms, Diane and her husband, Paul-André Mathieu, sought expert help.

Montreal architect Michel Villeneuve, owner of MVA Architecte in Town of Mount Royal, oversaw the project. “It took nine months, from the design stage to permits to construction,” he recalls. “The most challenging part was replacing existing support walls with the fewest possible steel beams.”

Villeneuve says steel beams were used to support the second floor. They were concealed in remaining walls so as not to clutter the main-floor space, which covers a total of 1,300 square feet.

“The den was much too small and there was a bathroom taking quite a bit of space,” he says. “And they wanted all the rooms open to the kitchen.”

The redesign made the kitchen larger and opened it up to a breakfast nook, formal dining room and living room and, in a second direction, to the den and a set of French doors that lead to the backyard garden.

The bathroom from the home’s previous incarnation as a duplex was demolished, which opened up additional space in what became the new den. A new powder room was relocated to a less intrusive location off the breakfast nook.  A new double-facing gas fireplace was installed in a new wall that separates the den and dining room, both of which are adjacent to the kitchen but accessed through separate entrances. The fireplace gives both the dining room and den their own charm. And new oak wood floors in a herring-bone pattern were installed throughout to unite the various rooms, an aim also achieved by the consistent use of high-contrast colours – white walls throughout, black accents (interior window frames, kitchen cabinetry, stove hood and accent walls) and Carrara marble (in both the kitchen and den).

The one unlucky surprise was the asbestos that was found in some of the walls. Work on the project was halted, and a removal team was brought in to dispose of the hazardous waste.

“It’s like a brand-new home, now,” says Villeneuve. “It’s clean and modern-looking.” He says Diane already had an obvious design sense and considerable decorating skills. “She was very hands-on. The idea was to accentuate her European-chic style with the new design.”

Diane, a paralegal, takes Villeneuve’s comments as a compliment. When she was in high school, she says, her life’s dream was to become a designer. “It was 1982; there was a recession on. My father said people are losing their houses, how are they going to pay you (for design work)?”

Over the years, she says, she has kept her interest alive by decorating and renovating the family home. This second renovation project took her interest to another level; it has turned out, she says, like a dream come true. •