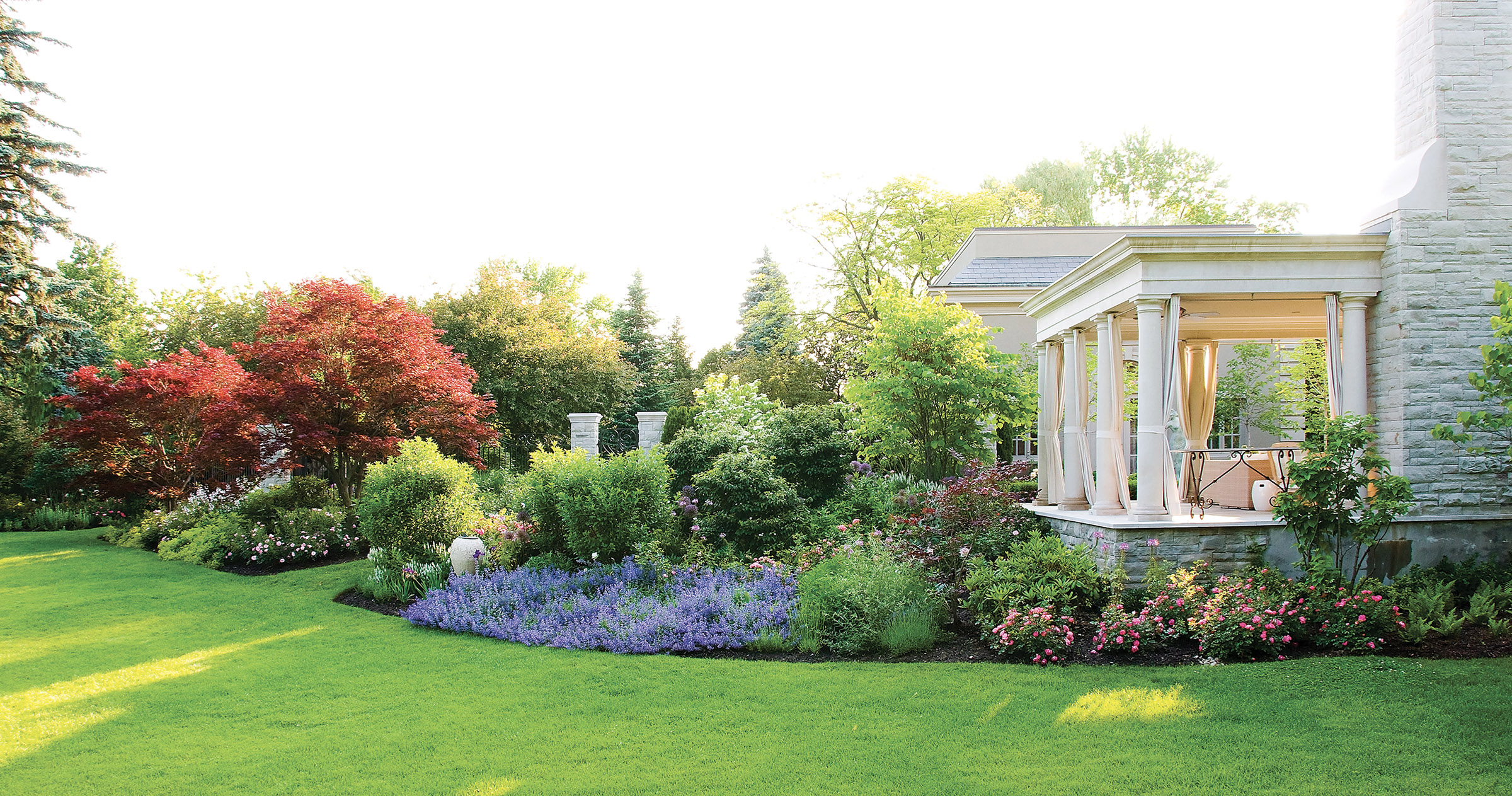 “IT’S A STORY OF SCALE, but still a story of design,” says landscape architect Janet Rosenberg of this property in the Bridle Path neighbourhood. Shaped like an uneven trapezoid, the two-acre property has a large single-storey family home and expansive grounds.

Rosenberg, the founding principal of Janet Rosenberg & Studio, describes the property when she first saw it as characterized by a traditional design aesthetic but “quite old and tired. It didn’t have space that worked for the family. It was very cut up. It’s a beautiful corner property and, because of that, you want a really nice sense of flow.”

She aimed to give the gardens, and the house they surround, more impact both aesthetically and in terms of daily life. The property is now divided into four distinct spaces: front entry court and side gardens, pool and tennis court, pavilion and parterres, and open lawn. This redesign gives the property “great stature and a sense of entry to it, and seasonality,” says Rosenberg.

In a landscape dominated by the automobile, many houses are designed so that anyone approaching is first confronted with driveways and garages – hardly a strategy to impose a sense of welcome. Rosenberg’s team, led by senior landscape architect and principal Stefano Giannini, changed that dynamic.

“One of the biggest things we did was we relocated the garage doors,” Rosenberg says. “They had a big garage door, and it cut everything in half.” By moving the garage doors to the side of the building, her team gave the house “a terrace area and a kitchen garden and a beautiful strolling garden. It made the driveway much shorter.

“It’s critical to get proportions right. We always make recommendations on the house.”

The now-short front driveway is enclosed by tall beech hedges and circles a large urn of greenery in front of the house, creating a more intimate air. On the house itself, the team redesigned the front porch (which is set off-centre, to the left) with columns and an elegant new door, adding depth and interest to the facade. Two large black vases, one on each side of the door, hold seasonal arrangements.

A path of Credit Valley stone pavers leads to the right along the front of the house and around the corner to the back. The back of the house had an existing covered colonnade, and Giannini and team gave it a wide stairway leading to the pool level. The generous pool surround of Algonquin stone has planting beds and plenty of space for lounging. At the back of the pool is a raised seating area featuring another colonnade, which mirrors the one attached to the house and also hides the tennis court from the house. Symmetry and function are combined for an aesthetically pleasing space.

From one side of the house, a path of Credit Valley stone leads through a series of parterres, planted with crabapple trees and rose bushes. Within this delightful space, it meets a similar walkway from the pool. The path from the house terminates in a semicircle, bordered by high hedges and visible from the house, where sculpture is displayed.

Beyond the parterres is an open-sided pavilion, its roof supported by columns and its sides with curtains so that it can be closed in if desired. It’s a luxurious space with generously proportioned furnishings and a retractable television screen. A fireplace ensures that, whether entertaining or enjoying a solitary moment or two, members of the family will be comfortable throughout much of the year.

The fourth distinct space on the property is an open lawn, bordered by lush planting and punctuated by statuary. Rosenberg characterizes it as both an active and a passive space. Within its generous area, perhaps children will happily play tag and adults will enjoy a game of croquet. It will accommodate large-scale parties, or the family and visitors can simply stroll or sit and enjoy the expanse of green.

The property is a combination of rooms (both figurative and literal), bountiful plantings, space to play, and space to relax. It suits the relative formality of the house design while not having an overbearing gravitas. As time goes by, its layers and textures and colours will endure.

“You have to design in a timeless way, whether it’s modern or has more traditional components,” says Rosenberg. “You have to have a very strong framework. If you’re designing, you have to think about it as a whole level of timelessness. This garden will not get old like the one [the owners] had beforehand.

“It has a design aesthetic and understanding of people’s lifestyle, and how the house and the garden are together. The bones of it will always work.” •

Tinkering With A Townhouse's Design