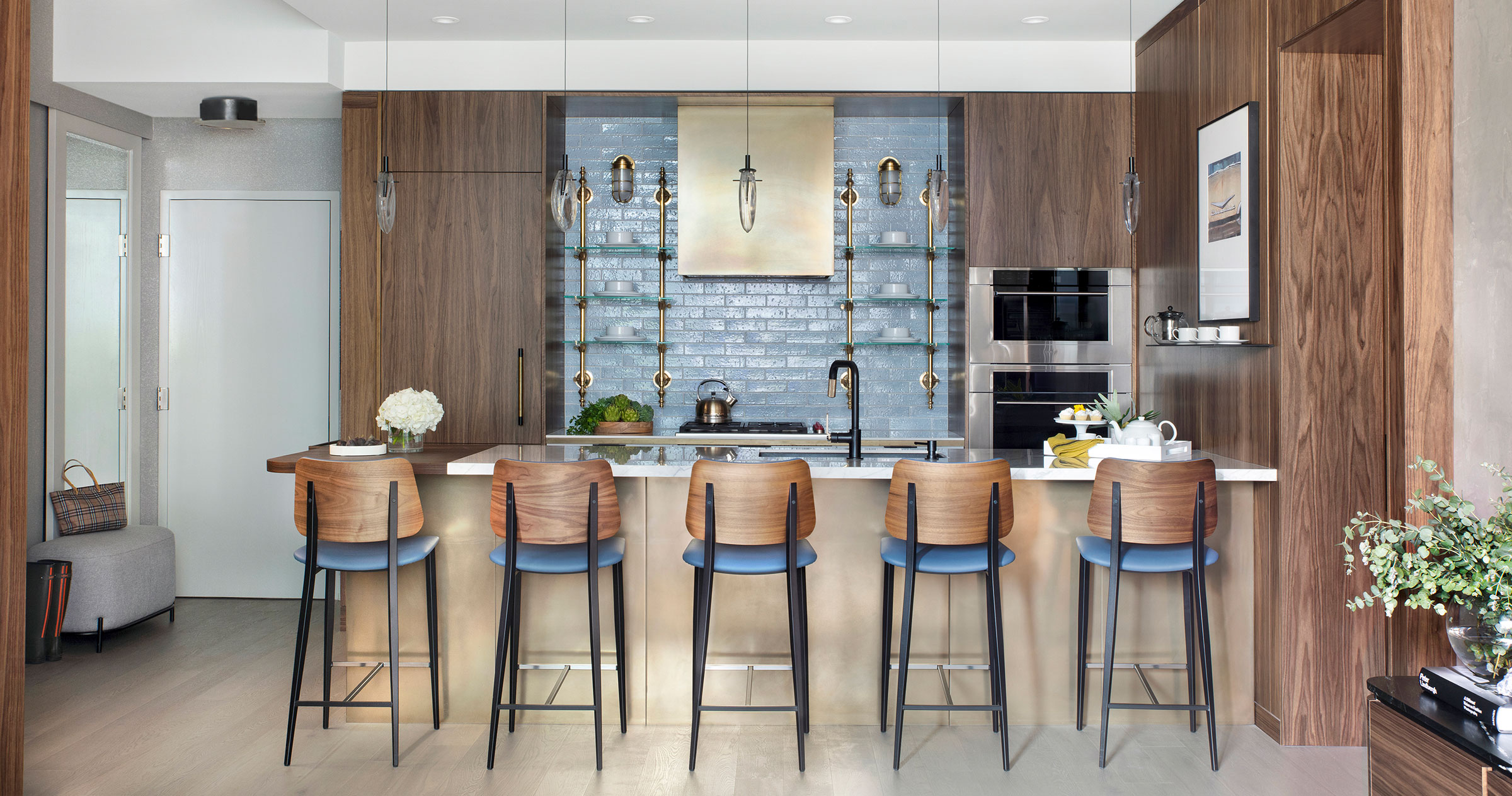 Making the most of a small space is a big part of any designer’s challenge, but Svetlana Tryaskina was put to the test with a couple’s 1,000-square-foot condo. “The design had to maximize functionality with the grandeur of a luxury hotel,” says the principal designer at Estee Design, whose project is a finalist for the 2020 National Kitchen & Bath Association (NKBA) Design Awards.

Isabella Pearson and Stuart Kirkpatrick had bought the condo in Toronto’s downtown entertainment district for their retirement. They rented it out while they were in Bermuda but weren’t pleased when they returned two years ago to what they perceived as its dysfunctional drabness.

“Builders sell units as ‘industrial’ but they’re grey concrete shells you have to transform from student housing into a beautiful, functional home,” Isabella says.

Avid home cooks, Isabella and Stuart hired Tryaskina after they’d set their hearts on purchasing high-end Sub-Zero and Wolf appliances. “I helped them with the proper size and model selections to accommodate the layout and the style of the design,” Tryaskina recalls.

Even so, the designer had to expand the kitchen by narrowing the doorway to the guest accommodations. “The bathroom used to open to the kitchen, which just wasn’t acceptable,” she says. “Now the guest bedroom and bathroom are a private suite.”

Proper overhead lighting in the new drop and perimeter ceilings eliminates the need for lamps. “I repeated the disc pendant lighting over the peninsula to make a statement without overwhelming the space,” Tryaskina adds.

She selected unfinished flat-cut veneer of American walnut for all the customized millwork. They capitalized on the ceiling height to accommodate cabinets, shelving and a built-in buffet.

“The buffet not only displays our china but stores the tomatoes, peaches and corn that I preserve,” Isabella says. “Svetlana replaced the useless original island with a peninsula where we can seat all our guests so that we don’t need a separate table.”

The homeowners dine at the solid walnut block, which has curved edges for comfort.

Always placing functionality at par with aesthetics, Tryaskina chose a high-end porcelain slab that resembles marble as a countertop surface when she learned that Stuart likes to mix his own spices. “I didn’t want the couple to have to deal with turmeric or paprika stains,” she says.

Moving the plumbing to the peninsula allows the couple to interact with each other, their guests, the skyline, or television while they’re at the sink.

Several ocean-blue touches remind them of Bermuda. The handcrafted backsplash tiles are the kitchen’s jewel with their watery iridescence. “They’re a splurge, but worth it to make this compact area special,” Tryaskina says. “In a small area, just a few different textures and shading work to create interest.”

The high-end faux-leather counter stools have a metal base that go with other black grounding elements. Liquid metal spray provided an antique brass finish to the hood and peninsula. “It’s a lighter alternative that’s easier to maintain,” Tryaskina says.

Panelling extends into the living area for a library desk that makes Stuart feel at home, and the master suite “disappears” with the simple closing of a secret door.

The couple now adore the condo. “Svetlana’s design has improved our quality of life, no question,” Isabella says. •