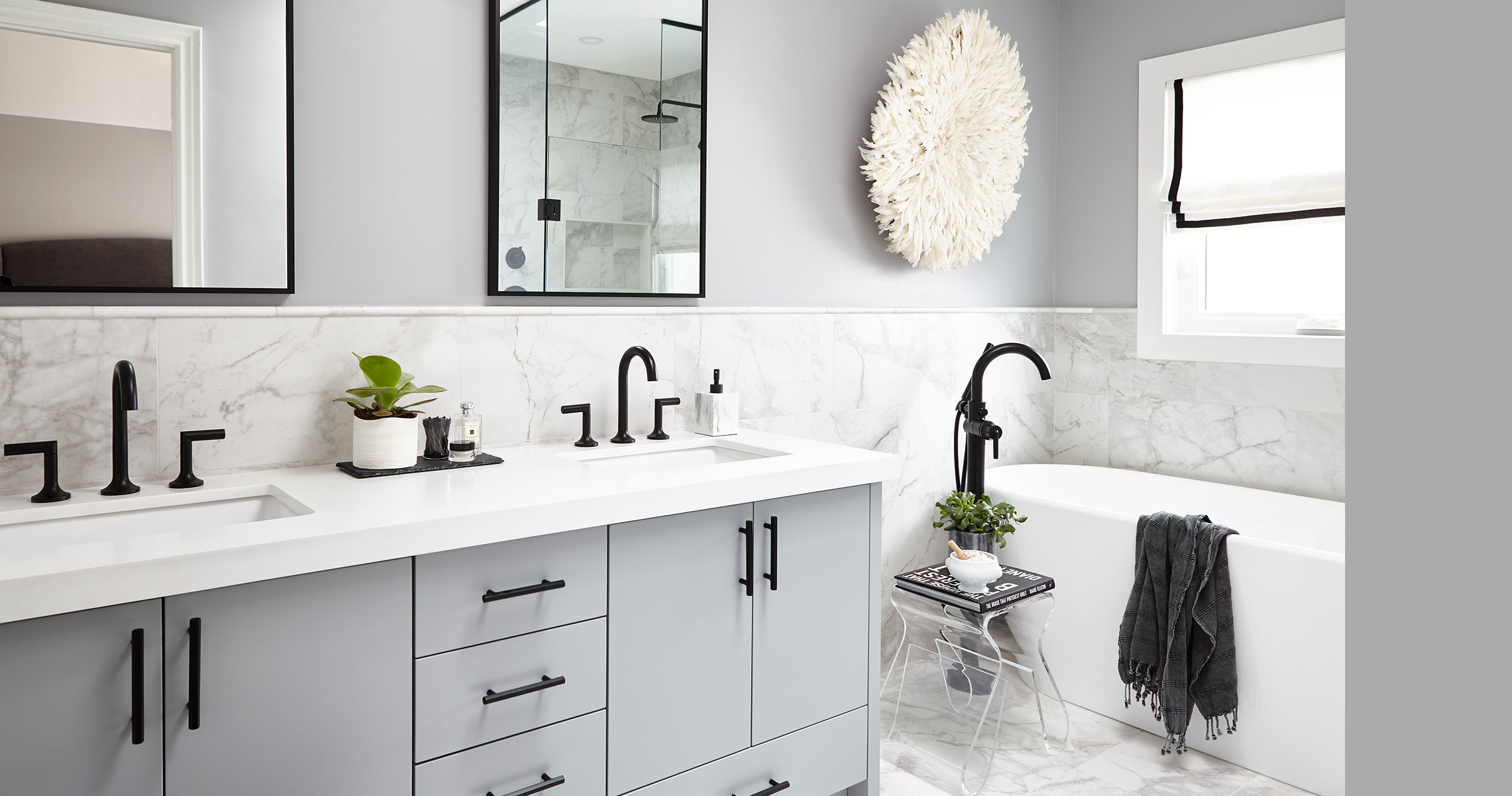 Having a bathroom that falls out of the pages of a magazine is a dream, but having three, well, that’s the trifecta. And the bonus: the cumulative effect resets the look and feel of an entire home.

If you need proof of the phenomenon, look no further than this 1990s two-storey home in the Bedford Park neighbourhood of Toronto, owned by a couple with two young children. The family had lived in the home for a few years when they decided they wanted to rid themselves of the ’90s look. They focused on the bathrooms – the main floor powder room, the children’s upstairs bathroom and the master ensuite. The crisp, modern reimagining of these spaces provided a new lens from which the whole house is viewed.

“We wanted a cleaner, modern feel” is how the homeowner described the general aim of the project. The rest was left to designers Alana Firestone and Jordy Fagan, designers and co-owners of Collective Studio in Toronto.

The duo assessed each room, taking size and principle users into consideration. Then, they had a meeting with the owners to thoroughly discuss all their must-haves. They covered a lot of territory, from component parts – such as baths and/or showers and single or double vanities, to colour preferences and specific likes and dislikes.

Firestone and Fagan then set off to create looks for each space. “Our main objective was to keep it calm and serene,” Firestone explains, referring to the plan for the master bathroom. “We wanted her (the homeowner) to walk in and feel calm.”

Fagan describes the master bathroom as “feminine, with a modern edge.” The effect is due largely to the clean lines and the generous use of glass. The porcelain tile on the floors and walls have the distinctive look of marble without the maintenance, Firestone adds. Her favourite part of the new look is the shape of the oval tub and the black borders along all the glass edges.

Firestone points to the black faucets and showerheads. “We wanted the boldness of the black,” she says. “We didn’t want chrome or brass.” The matte-finished hardware is from the Jason Wu Collection by Brizo.

“I love how the tile is seamless in the bathroom and shower,” the homeowner says. “It doesn’t have that standard step.”

One of the major upgrades in the space was the installation of a window in the wall above the tub, replacing the dated glass blocks that merely allowed light to penetrate. The addition then called for a treatment, which resulted in the custom-made off-white Roman shade with a black trim.

Firestone cites the thermostatic on-off controls for the shower, which are set off to the side, away from the showerhead. Having the controls – in a matching matte black, which adds to the designer look, also allows the users to set the water temperature without risking getting their hair wet or being hit with water that is not the perfect temperature.

In the children’s bathroom, the biggest challenge was the awkward shape of the room. “We needed to modernize it, get rid of the ’90s and square everything up,” Firestone explains.

The steel-blue double vanity with its custom built-in pull-out steps to help the young boys comfortably access the sinks serves to add a unique, useful accessory. It also frees up space in the small room by preventing the need and clutter of step stools.

To deal with the odd angles, the designers opted to go with a short vanity. In addition, by mounting the faucets on the wall, they were able to make it narrower, again saving precious inches.

Adding to the look is the shiplap wainscotting on the walls. The porcelain floor tiles in a chevron pattern feature various shades with a cement-like finish to complete the look.

“Now, it’s a very cute boys’ bathroom,” Fagan says. And there is nothing cuter than when one of the boys pulls out his step before brushing his teeth.

In the main-floor powder room, colour is the prominent feature. A bold wallpaper on the back surface immediately catches attention. “It makes such a statement,” says Firestone. “It feels a little ‘watercolourish.’ ”

The brass-coloured hardware, including the Brizo faucets, adds an upscale distinctive look that cannot be overlooked …. because details do matter. •