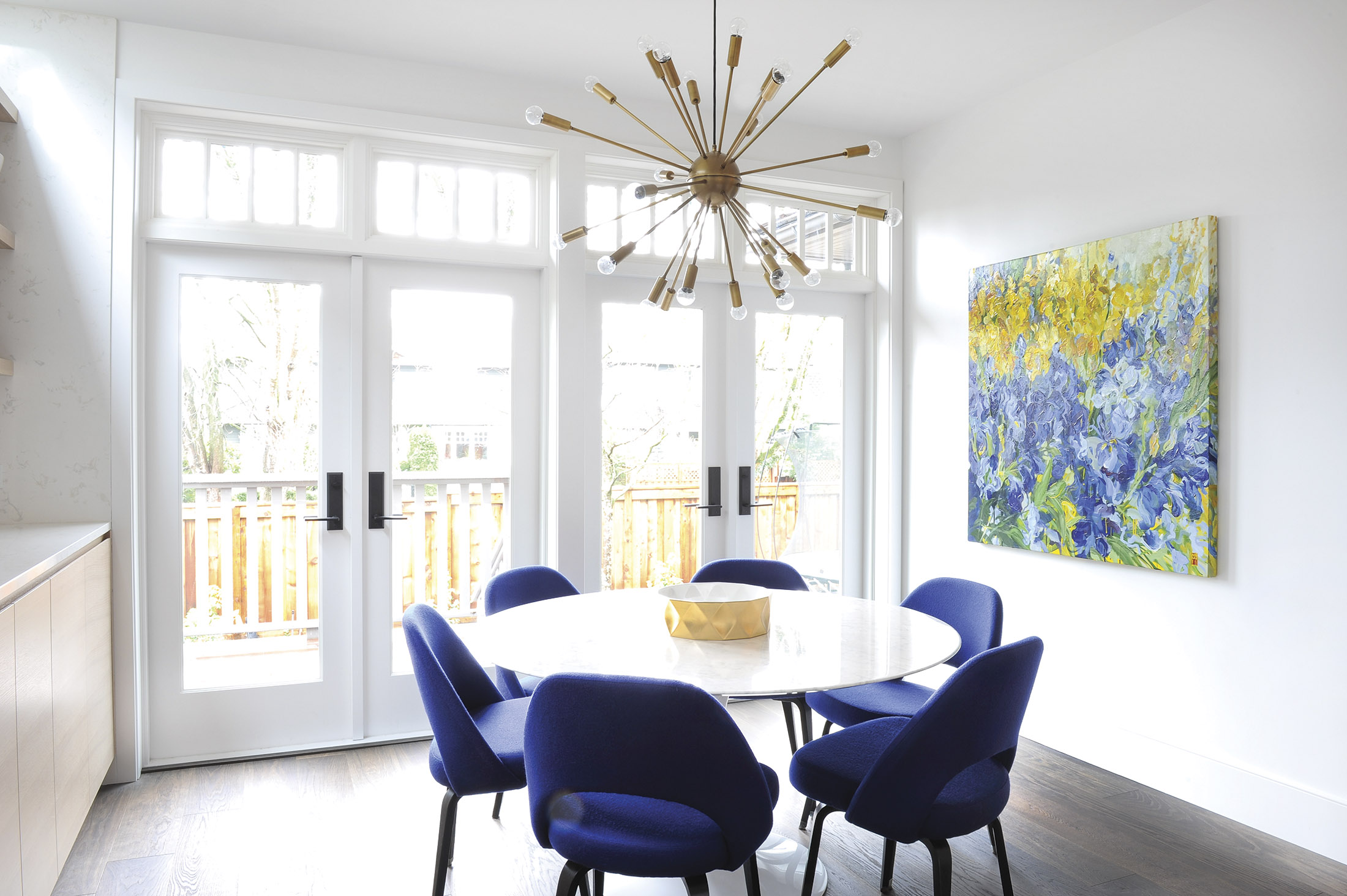 Flower Power And The Impact Of A Painting

A 1922 Shaughnessy home gets a makeover, and its design cues are inspired by a piece of art

Call it “flower power.” It was the sprawling gardens on a Shaughnessy property that convinced its new owners that they had to buy this home, and then a painting of blue and yellow irises that inspired its redesign.

Built in 1922, the home had been through a few renovations already, but to make it work for their family, the new owners decided to gut it and make it grow in almost every direction. They added an extension to the back and onto one side, installed dormers that added height, and dug out the basement so they could raise its ceiling height to 11 feet to accommodate a golf simulator. The home was expanded to 4,700 square feet from its original 3,300.

Part of what the owners loved about their home was its Tudor-style charm, and they combed through photo archives of old neighbourhood houses looking for inspiration on how to preserve it. “We wanted to keep the essence of what an old home would have looked like,” says Janie Hungerford, owner and principal of Hungerford Interior Design, who says part of the original facade was restored as builders added on to it. “We worked carefully to make that happen.”

Several of the old photos they found, including one of a home down the street, showed the same striking front door, in a shape they’d never seen. The top was rounded like an arch, then came to a point at the top. The homeowners fell in love with it and had one custom-made by Mountainview Designs. “Everybody comments on it, and when we put it in, even the tradespeople working on the house were talking about it,” she says.

Inside the house, the style shifts to transitional, with some original features, such as the lead-framed windows in the kitchen, mixed in with the contemporary styling. Instead of a completely open floor plan, walls define the dining room, home office and mudroom entry, but still keep the space open enough to allow for easy flow. “We wanted to keep the feeling that each room was its own entity,” Hungerford says. “But you have to be thoughtful in how the rooms connect to each other.”

The kitchen prep and eating areas are across the hall from the dining room and extend into the great room where the family spends most of their time. “It’s where all the toys get brought and where everything happens,” says the homeowner. “We all like to be in the same area.” So even though her husband has an almost floor-to-ceiling screen with his golf simulator downstairs, the family always seems to gather upstairs to watch TV together.

The kitchen is also home to the Bobbie Burgers painting that, Hungerford says, inspired the direction of the house. “The homeowner loved the colour and the textures, and as much as she likes things to be on the neutral side, she was open to us adding pops of colour to add personality and interest.” So, the blues used by the Vancouver artist worked their way into the black-and-white backdrop of the house, inspiring the choice of cobalt-coloured chairs in the eating area, the large blue poof chair in the living room and the blue rug in the dining room. The painting’s yellow, gold and chartreuse tones come through in accent pieces. “I really wanted the black hood fan,” the homeowner says, “Then she (Hungerford) brought everything else together. What I appreciate is that she did it in such a thoughtful way.”

One of the special kitchen features is the cabinetry. The doors and drawers have built-in grips instead of handles, and their surfaces stay smooth. “There’s definitely more labour and cost involved,” Hungerford says. “But it’s unique; you don’t see it everywhere. It’s one of the things we as a company pride ourselves on. We’re boutique and high-end and do things in each project that are unique to each client.”

It’s a feature the homeowner says was worthwhile. “I like it because we have kind of a pass-through kitchen and I didn’t want things sticking out so the kids could hurt themselves,” she says. “I like how clean it looks and I don’t have 27 knobs or handles sticking out.”

Whatever the characteristics were that persuaded the homeowners to buy the property, it is but one of many renovated elements persuading them to stay. •