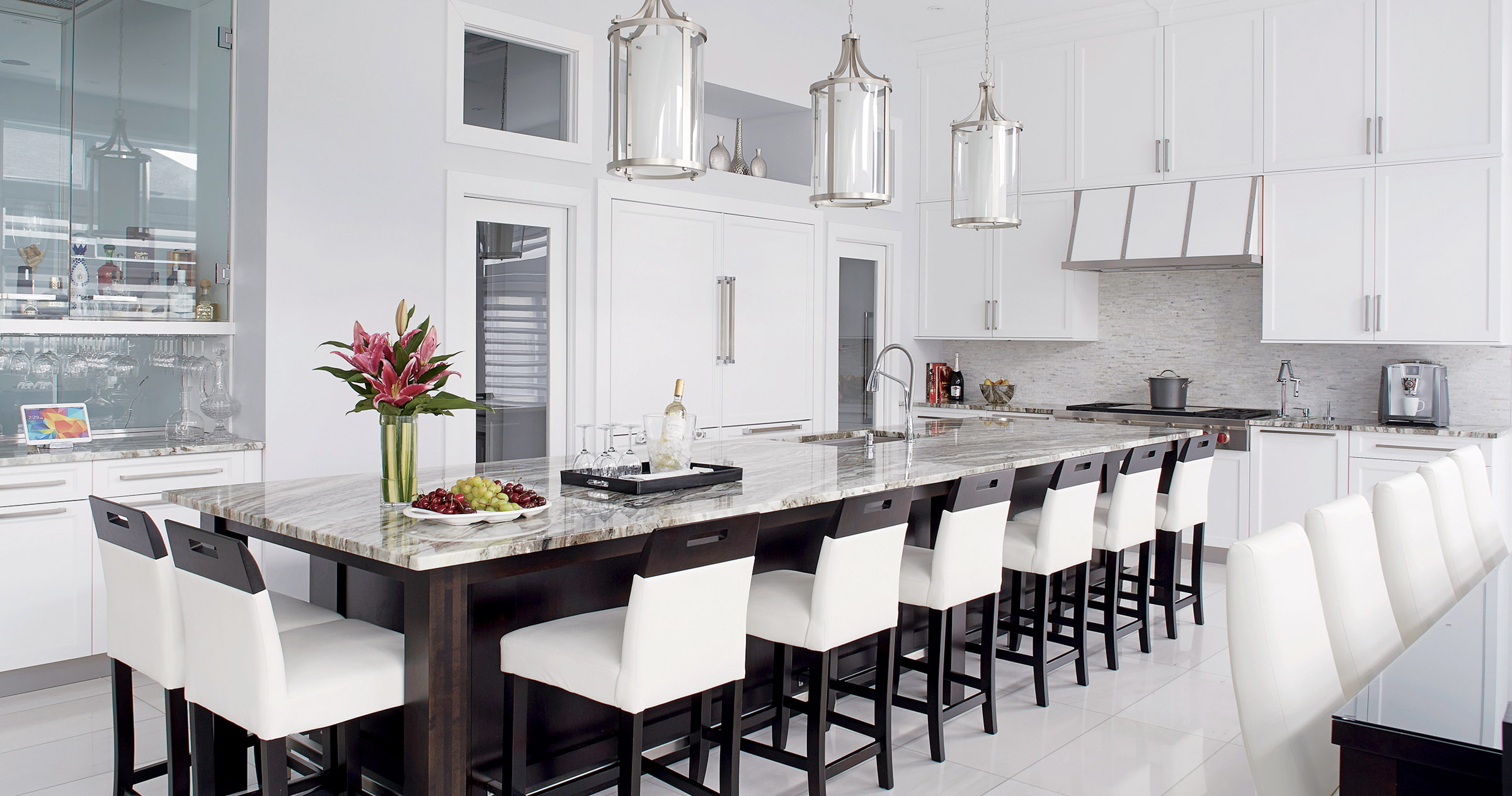 Everything That Can Be Wished For

This large kitchen was designed to welcome a crowd

The owners of this home wanted a big kitchen. But that was just the beginning of their wish list for the space. They also wanted a large pantry, a bakery section, a sizable dinette table and an island that could seat 10. That’s right, 10.

That was the challenge.  And to meet it required a step-by-step plan, says Nancy Ouellet, the chief designer with Club Cuisine BCBG in Laval, which designed and built the kitchen.  “We worked the kitchen by zones,” Ouellet explains.

The first step was to position the essential items: the professional-grade Wolf gas cooktop, a large Sub-Zero refrigerator, and the sink.

The next step was to establish where the biggest elements would go – namely the island, dinette table and bakery zone.

Then, all the details were factored in. And there were many, including the alcove above the refrigerator, an architectural element that complements the high ceiling, the small convection oven built into one end of the island, the custom-made hood over the range, and the glass-fronted cellier de vin, which serves as a focal point when viewed from the living room.

But let’s get back to the bakery zone. It is actually a kitchen within a kitchen, Ouellet says. The homeowners requested this feature because their teenage daughter is an avid baker. Tucked behind one of the glass-panelled doors beside the refrigerator, it is an eight-by-10-foot workspace that includes two ovens, counter space, a sink, and storage area. It also serves as a butler’s pantry that offers access to the dining room.

The walk-in pantry is found behind another glass-panelled door on the opposite side of the refrigerator. It, too, is an elegantly finished eight-by10-foot space with a marble countertop.

The enormous island, which measures five feet wide by 18 feet long and contains a prep sink, is topped with two slabs of marble that have been impeccably matched so that the veins of the stone align perfectly, creating a stunning effect given its size, Ouellet says.

And the flooring – large white marble tiles – are the same ones that clad the surface of the home’s entire ground floor.

Ouellet, who designed all of the home’s interior, describes the kitchen as “contemporary and timeless,” adding that the room highlights the architecture and design of the rest of the house. •

Harmony In Life And Landscape