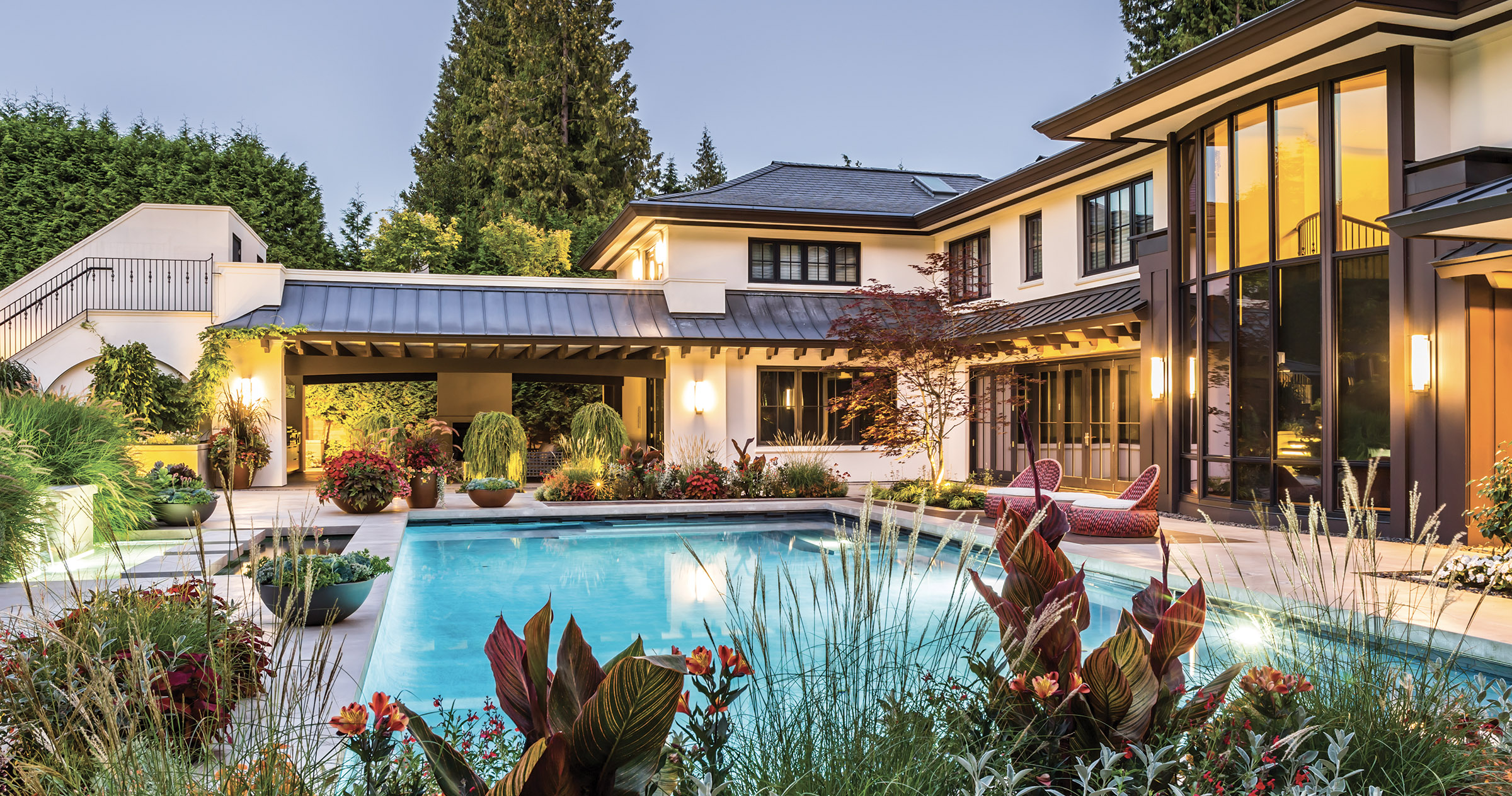 Harmony In Life And Landscape

A 30-foot-high cedar hedge, an old swimming pool and a half-acre of chewed-up ground: that’s what confronted landscape designer Ryan Donohoe when he first saw this now-lush and serene space in West Vancouver.

The area had been used to store construction materials for the large home on the property that was being renovated from the studs out. “The client wanted the space transformed into a garden that married contemporary design with Asian influences,” says Donohoe. It had to follow the principles of feng shui, have seasonal plantings throughout, and provide multiple spaces that the homeowner can retreat to at various times of the day.

Donohoe, the owner of Donohoe Design Inc., was both excited and somewhat intimidated by the magnitude of the task. But he had years of practical design experience under his belt, supplemented by training at the Inchbald School of Design in London, England, and he was up to the challenge.

“My training at Inchbald taught me to conceptualize a garden only after having a deep understanding of the client’s needs,” Donohoe says. “Allowing time for this process provides a richer and more diverse design, giving the client a stronger connection to their landscape.”

Time was something he did have. It ultimately took six years from when he first heard about the job in 2012 to completion in 2018 – a seemingly long stretch, but planning and creating gardens of this complex nature do take time, and the house renovations were also under way during most of the period.

Donohoe’s client is from Taipei. She lives in Europe and has spent a lot of time in California, which has given her a sophisticated appreciation of Old- and New-World influences in design. “She appreciated my training in England, which gave me international experience,” Donohoe says. “She knew that I was dependable and willing to be really flexible.”

The owner’s sister and nephew live in the house year-round, and other family members from around the world visit regularly. “The homeowner and the family had their ideas but they wanted my feedback,” Donohoe says. “We developed many concepts, and after many revisions, hit on the one they loved.” The design was approved in 2014. Houston Landscapes of North Vancouver executed the design, and the last of the softscape installations was done in the summer of 2018.

The centrepiece of the garden is a unique wind chime, set in the pentatonic scale. It’s a large curved arbour of eight blades of Cor-Ten steel, bolted into concrete footings, with hanging chimes. Each blade is crowned by a brass plaque displaying the Mandarin character for one of these words selected by the client: Respect, Reflection, Humbleness, Peace, Effort, Manner, Honesty and Kindness.

“The sculpture was my design,” says Donohoe. It was fabricated in England by British sculptor David Harber, who consulted a wind-chime expert in Ohio. Harber’s expertise was valuable, and Donohoe calls the result a combined effort.

“The wind chime provides a protective element,” Donohoe says. “The steel blades are like eight soldiers standing guard over the family. The blades are big, almost supersized humans. If they were human-size, they’d be less of a protecting, hugging feature.

“The curve is repeated behind the sculpture as a walkway. There’s also a curved walkway at the front of the house; it’s the same arc repeated in the front and back.”

The rest of the garden is divided into several rooms by plantings and changes in elevation. There are three main seating areas: the pool deck; a firepit in an elevated section at the end of the direct sightline from the house’s central stairway, through the centre of the wind chime to the back of the garden; and a patio in the front yard that catches the morning sun. Also along the sightline is a raised vegetable garden, ergonomically designed so the owner doesn’t have to stoop to enjoy tending it.

All around are flowering plants and ornamental grasses that provide texture and colour. “In design, we typically pick colours that are close to one another, but my client wanted vibrant colours in a mix throughout the year,” Donohoe says. “Other family members visit, and they often arrive when, for example, cherry blossoms are falling or the rhododendrons are flowering. This garden is never dormant, even in winter. There’s a balance of evergreens with perennials and deciduous trees.”

Donohoe’s approach to this garden is typical of his work in general. He and his company focus on single-family residences and develop a high level of personal connection with their clients. They discern the spirit of the family and imbue it in the landscape.

The process is perhaps longer than some designers provide, but it’s well thought out and results in “spaces of beauty that people can live in and be connected to family,” Donohoe says. “We’re not creating a space that just looks good; it will suit the people who live in it.” •

Few culinary experiences surpass the sweet, somewhat malty aroma of freshly baked bread. The smell transports us back to childhood,...

Sia Veeramani and her husband have a tradition around New Year’s: they do a big clean-up and take out the...

A Mixture Of Styles

Mont Tremblant is the region of Quebec's Laurentian Mountains famous for Aspen-like skiing, snowboarding, delicious beaver tail pastries, and some...

PHOTOGRAPHY: CHERYL SILSBE     Lindsay Brommeland and her husband, Todd Homan, describe themselves as modern-day hippies: they are vegetarians, urban beekeepers...