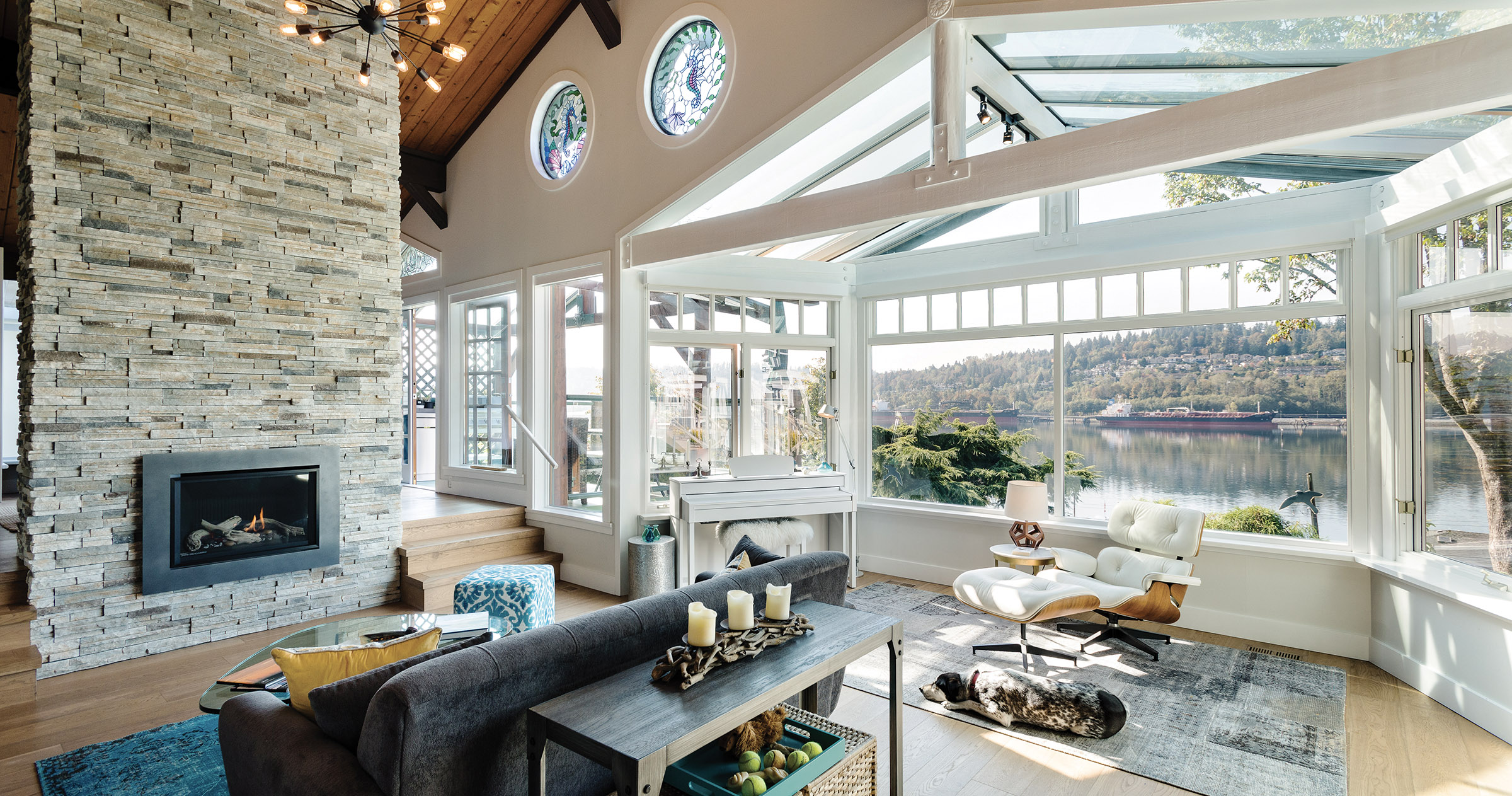 A Cozy Contemporary Home Is Redefined

Stunning bay views are easy to come by in the area of Port Moody known as the Golden Mile. But few homes along it can rival the charm and originality of this one. “I knew as soon as I walked in that it was the house for us,” says the homeowner, who lives there with her entrepreneur husband, twin 17-year-old daughters and a rescued dog of mixed pedigree.

Originally built in the 1950s, the now-3,500-square-foot home – enlarged from its original 2,900 square feet – had been modified throughout the intervening decades. But unlike many such patchwork properties, what was added had a definite and slightly quirky appeal. Natural-pine vaulted ceilings with wood beams, for instance, give a sense of timeless grandeur and more space.

The homeowner also loved two features handcrafted by the previous owner: inside, two porthole-shaped stained-glass windows on the main floor, and on the exterior, the ludic dolphins, lighthouses and other images carved into the wooden posts supporting the elevated patio. “We were moving here from Hong Kong, where we had lived for 16 years,” she says. “One of our homes there was a houseboat, and we love such original and nautical touches.”

In the revamp, the amateur photographer’s style preferences, which are “clean, white and contemporary,” would have to be considered as well. And though she is no stranger to renovation projects, the logistics of organizing one while still living overseas proved daunting. She placed this one in the hands of interior designer Sarah Gallop, principal designer and owner of Sarah Gallop Design in Vancouver.

Gallop and her team devised an innovative change to the main floor’s layout. It called for removing some walls and relocating the raised master bedroom. In its place now stands the kitchen. Elevated, it flows directly into the dining area on the same level behind the fireplace.

The kitchen overlooks the great room’s living area and enjoys an unobstructed view through a wall of windows and out to sea. “The move gave the kitchen a definite sense of presence,” says Gallop. “And the whole main floor now has more of a great room feel.”

A major design decision had to do with whether to paint the natural wood. In addition to the ceilings and beams, the original trim on all main floor windows and doors had a dark stain. Should it all be painted white as a more contemporary approach? Or would it be sacrilege to put a brush to any of it? After much debate, a compromise was reached.

The ceiling and many beams kept with their natural finish; the dark wood trim and columns around the sea-facing windows were painted white. Included was a bay window area off it, which now has a bright, sunroom-like charm and is an area in which the homeowner finds inspiration to play the piano. “I think we made the right call,” says Gallop.

Contrarily, darker-toned wood accents were added to the kitchen. A bank of book-matched cabinetry on one wall provides ample pantry space and a wine rack, while a solid slab of black walnut was used for the raised breakfast counter. The warm woods contrast sharply with the white quartz countertops and high-gloss flat-front custom-made cabinets.

The great room is unified by engineered oak flooring running throughout and a soft white colour on the walls. The original fireplace commands pride of place in the centre, receiving new ledgestone cladding in a soft grey colour that is shot with ochre.

The homeowner selected contemporary living room furniture upholstered in shades of grey. She then added accents in her signature colour, a bright turquoise that she considers positive and uplifting, in the rug and ottoman.

It is echoed in the dining room. where a custom Chinese lacquer-finish hutch in the same hue, commissioned in Hong Kong, stands.

The main floor includes a bedroom for each of the twins. Being “not identical in any way,” as their mother says, they each have a bedroom that is different from the other.

On the top floor, a 660-square-foot addition on the street side expanded the original square footage. The space contains the master bedroom with its walk-in closet and ensuite bathroom, and a guest bedroom that doubles as a den and tv room.

Stairs off the dining room lead to the basement level. Originally, the ceilings in parts of it were a scant six feet in height. An additional three feet of head space was excavated, and extensive structural work undertaken. Now a study with two workstations overlooks the back garden.

Underneath the living room, there is a cozy family room with widescreen television and French doors leading to the backyard.

A cut-out in an adjacent wall makes it possible for anyone using the games room beyond to see the television and check a hockey score. A specially commissioned table that converts from pool to ping pong stands in the room, which doubles as a laundry area.

The homeowner continues to be thrilled with the home, finding it perfect for indulging her love of cooking and entertaining. The makeover impressed her family as well, and both her niece and sister are also building homes with Sarah Gallop’s help.

But the homeowner remains unconcerned that their projects will rival her own. “This home is the perfect blend of old and new that somehow works together,” she says. “It’s just an amazing house and one in a million to me.” •