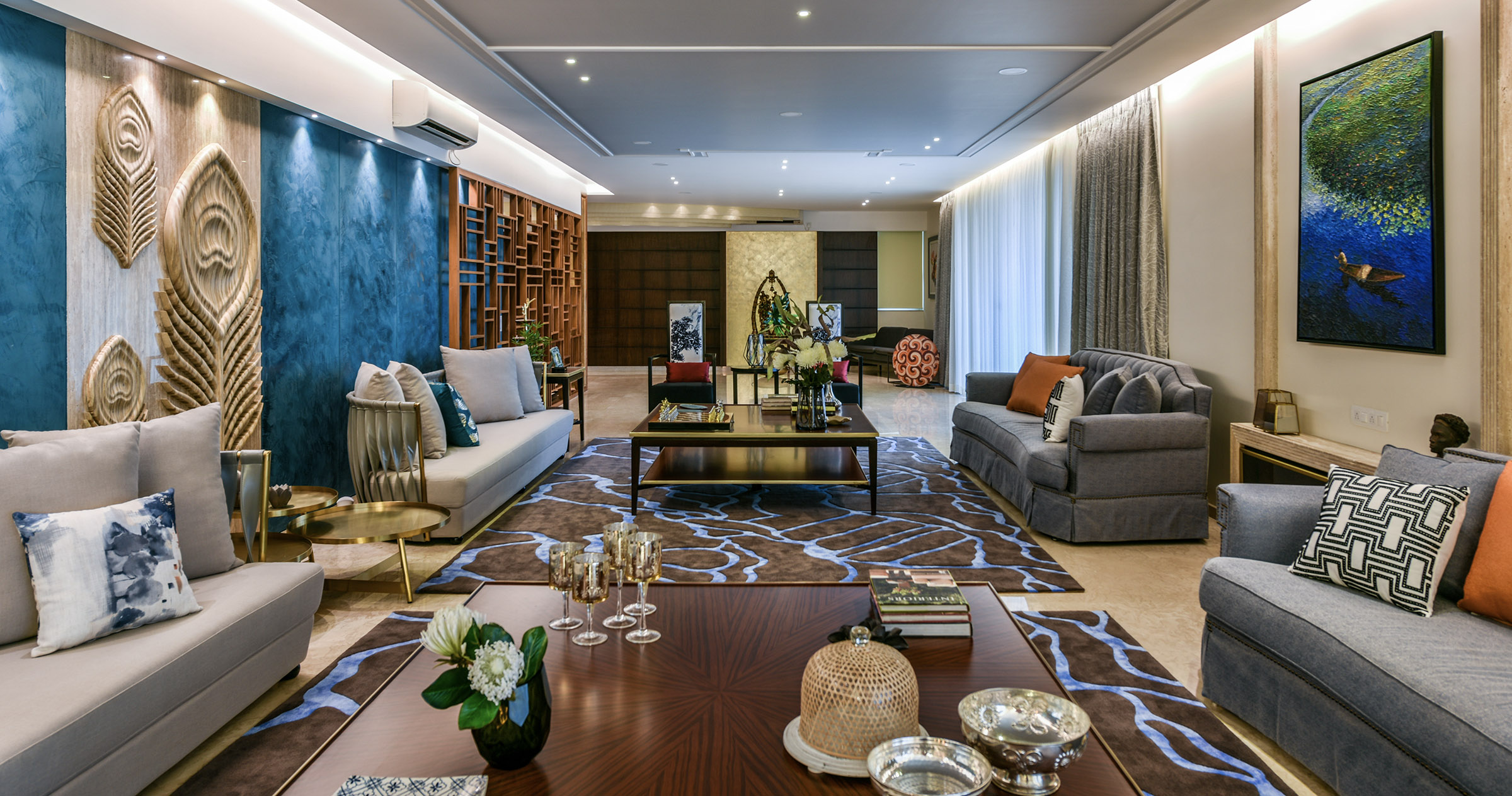 The expressions working from home and home office carry different meanings for different people. For some, it means having a laptop and a favourite space on the sofa, or a table or desk in a corner of the living room. Some are lucky enough to have an entire room. This apartment in Thane, a city near Mumbai, India, has not one but two offices.

It’s a very large home and business space, made out of two mirror-image adjoining apartments. The common wall shared by the two living rooms was demolished, giving the new apartment a total of 7,300 square feet. It’s owned by a man and his son, who are in business together, and it also accommodates the son’s wife and two daughters.

The elder businessman is not just a captain of industry; he’s also a prominent person in his community. He and his family need space for work, space for formally receiving members of the community, and space for private family life and entertaining.

The main person behind the interiors is Manish Dikshit, a partner and design principal in AUM Architects. He and designers Sonali Pandit and Nachiket Borawake had their work cut out for them, adapting the combined apartments’ decor and layouts to make distinct areas within a cohesive whole. They did this by demolishing only a few walls; instead, they used dividers, colour, and dimensional ceiling and wall treatments to signify the changes in function.

“The ceiling height is not the best; it’s 9.75 feet high,” Dikshit says. “It’s a critical element. In the apartment’s elongated spaces, we added lots of vertical elements to give a sense of height.  All of the areas have been very distinctly done; however, we have tried to smooth the transition from one space to another. The boundaries have been created in a way so that it’s a subtle conversation between any two spaces. At the same time, one is surprised at the metamorphosis.

“Because it’s a big apartment, we recommended that they should not have one big living space,” he continues. “They need different zones so that they can enjoy the space but it’s not monotonous.”

Apart from wanting to make each room different for aesthetic reasons, Dikshit and colleagues used the many spaces to accommodate two distinct tastes in decor. The paterfamilias, who is almost 60 years old, has somewhat contemporary tastes, and he also loves the colour orange. “He wears only orange clothing,” Dikshit says. “He told us that no matter what happens, ‘I need orange in my room, but use it in a subtle way.’ ”

The 35-year-old son’s taste runs more to classic Indian style. “He lived in Germany for four years, and feels that the difference between continents is colours,” Dikshit explains. “He said that greys and blacks appear so often in Europe, and that ‘I want colour in my house,’ so we gave him colour but, to remind him of his time abroad, in one room (a guest room) we gave him one black wall.” Even there, however, there are large warm elements introduced through wood furniture.

A noticeable feature of the apartment is the use of dimensional ceiling and wall treatments. Perhaps the most striking is in the prayer room, dedicated to Lord Krishna. The walls and floor are pale colours and mostly unadorned, but rising behind the altar and across the ceiling is a sophisticated treatment of closely spaced slats of wood that cause interesting patterns of light. They give a warm, organic effect in a space of quiet, non-distracting decor.

The formal living room is a large space and makes full use of wall treatments to make it feel more intimate and to emphasize various areas. Its feature wall comprises turquoise textured expanses, which flank a custom-made two-dimensional marble panel that forms a focal point, and a wooden partition overlapping the textured wall at one end.

The informal seating area decor shows an Asian influence, which is also expressed in several other parts of the apartment. In this seating area, wallpaper in subtle shades of gold forms the background against which Asian minimalist furniture has been placed.

Private areas such as bedrooms and guest rooms all have their own strong personalities. “The concept is that people get bored if they see the same thing again and again, so every room is completely different,” Dikshit says. “There’s a surprise element. Every room has dramatic decor but blends well together.” •