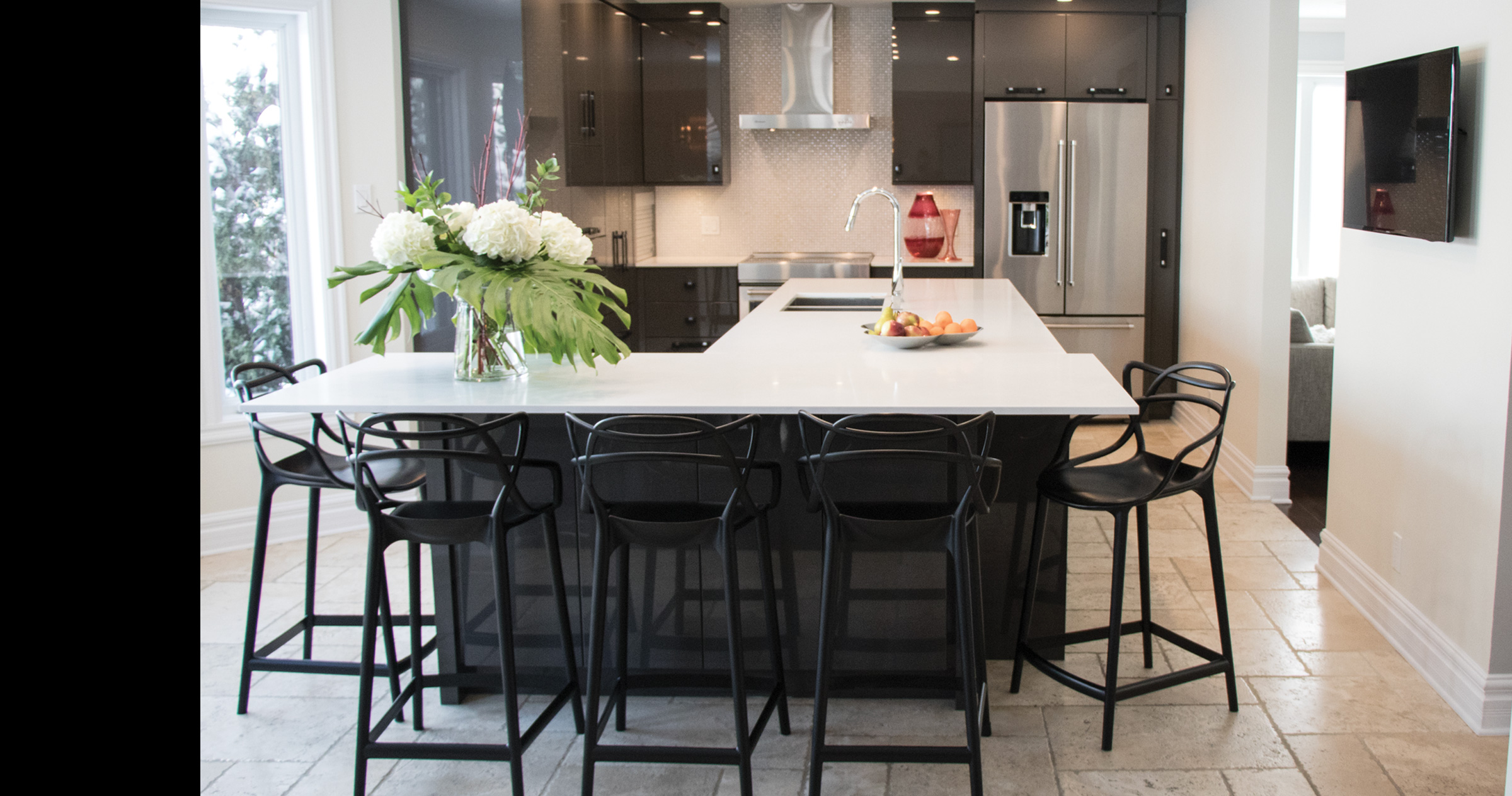 Even before moving into their new house in Longueuil with their blended family, homeowners Julie and Stephen knew the old kitchen would have to go. With five children between them, they needed more counter space for meal preparation, a kitchen island for casual dining, and a design that would allow family members to pass through without getting in the way of the cook: Julie.

Although the house was relatively new (nine years old), the kitchen layout just didn’t work. The stove, fridge and sink in the old kitchen were positioned on three different sides of the room, making it difficult for cooking, especially when people gathered around the island as they often did. Making matters worse, the kitchen had two archways, one to the adjacent den and the other to the dining room, robbing valuable wall space that could have been used for cabinets. So the couple called in Montreal designer Jean Monet of Monet Interiors and architectural designer Nataly Houle of ArtZone in Ste. Hyacinthe to make it all work.

“Nothing was left but the floor,” says Monet of the four-week kitchen renovation project, which was completed in the autumn of 2017. “It was not a practical design,” he says of the former kitchen.

The goal, he says, was to improve the use of the existing 12-by-21-foot floor space, and the flow between the rooms on the main floor. Monet says Houle is a master at sizing up existing space and redefining its use and function.

She devised a design to remove a small window over the kitchen sink.  Although the window looked out on the backyard, pool and patio, it occupied what could have been the only solid wall in the kitchen. Once it was removed, Monet explains, they were able to install a wall of cabinets, including two pantries. The new sink, along with a garbage disposal unit, was installed in a new L-shaped island topped with white Caesarstone quartz. The new location of the sink meant that it, along with the stove and fridge, formed a neat work triangle and they were no longer in the pathways of adjoining rooms.

Double-stacked drawers and more cabinets were then installed on three sides of the new island.

LED recessed lighting made up for the loss of light from the window. And the new island has seating for five in a house with five children, aged 11 to 22, in a kitchen that never closes.

“Now it’s fun to be in the kitchen,” says Stephen. “Julie likes to cook up a storm on Sundays, prepare for the week ahead. We can have people over, family. Someone pops in and it’s easy.”

And the family loves the way the kitchen looks. “There’s a timeless thing about white kitchens,” Stephen says, but adds that he and Julie are happy they chose a charcoal-coloured lacquered cabinetry. “It’s elegant, glossy. It’s sexy. It’s hot,” he says. •