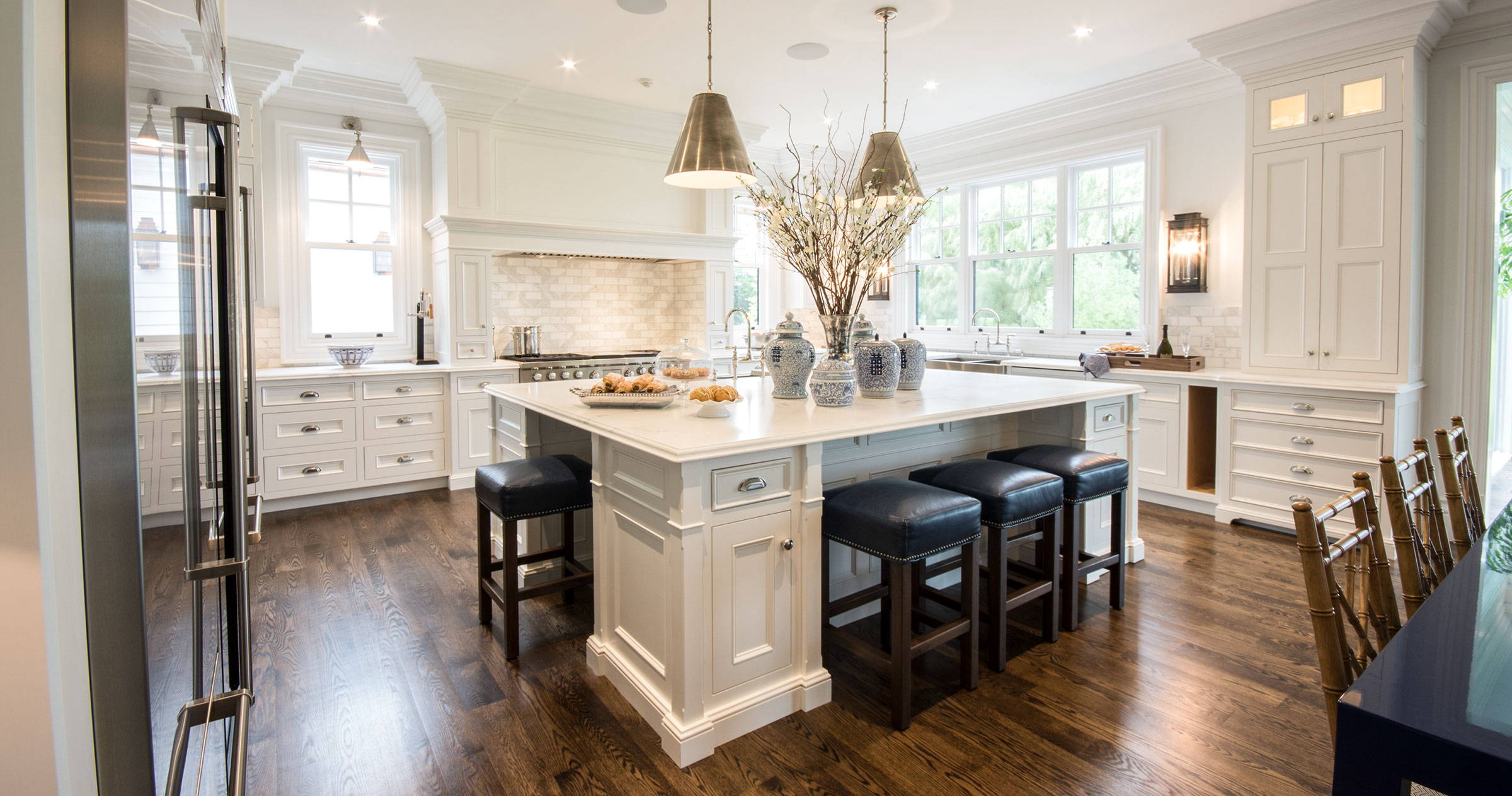 It started as a grand idea, part of a large addition to an existing home. However, the addition was not feasible due to site conditions. The homeowners explored other options with their architect, Kent Taylor of Taylor Group in King City, and ultimately chose to build a new home, which went up in record time on a nearby lot with rolling hills and beautiful views of horse country north of Toronto. “The homeowner was able to build this scale of project in record time due to the work of builders John and Johnny Custodio of Dellfina Homes,” says Jack Creasy, senior designer and project manager with Bloomsbury Fine Cabinetry, who was along for the ride from the very beginning. “This kitchen is reminiscent of the design from the renovation plans but, now that we were dealing with a new build and not a renovation, we were able to expand the possibilities and take the design of the space a step further.”

Bloomsbury had initially been awarded  the contract for such key rooms as the kitchen and master suite. However, the homeowner was so pleased with the approach and work of Creasy, company owner Rhonda Thornton, and the rest of the team that she awarded the remainder of the millwork to Bloomsbury. Relying on one designer and team who understood her vision allowed for a consistent flow throughout the home and also simplified the design process and coordination of details.

Creasy says that having the design team – architect, builder and kitchen designer  working together from the beginning, meant that any changes were made on paper before construction started.

The family is small: two adults and one child. The kitchen is the hub of day-to-day life and the site of intimate family dinners. But the family also entertains or hosts events with sometimes 60 guests or more. Thus, the kitchen was designed to serve daily family needs but also to function as an attractive yet efficient space for caterers and guests. Bloomsbury and the homeowner designed the kitchen to function within three rooms (350 square feet of kitchen, plus 160 square feet of servery and dish pantry). The space is full of details, both big and small, that facilitate activities ranging from cooking homey family meals to hosting big catered events.

The large island (seven feet wide and just over nine feet long) has knee space for custom-made Bloomsbury Signature stools on not just one but three sides. This allows the family to eat and converse comfortably and also serves as seating for guests during parties.  The adjoining servery and dish pantry offer functional overflow space and connect into the formal dining room.

A plethora of thoughtful features makes this a delightful workspace. There’s a four-bin waste/recycling centre by the main sink and a similar two-bin centre in the island, which has its own double sink. Drawers feature a custom-made wooden knife block and wooden inserts for cutlery, cooking utensils, and spices. Servery drawers have velvet-lined anti-tarnish inserts for silverware. The side columns in the range hood have drawers and pullouts for storing oils, vinegars, and other ingredients.

All this functionality is provided within a design aesthetic that has a touch of grandeur but is warm and inviting. “It’s a timeless look that will always feel relevant and current,” says Creasy. “The furniture-style framed inset cabinetry has a classic English aesthetic that is refined and elegant. We understood the homeowner’s vision, and she had a great eye for furniture and accessories to complete the space.”

Creasy calls his team the homeowner’s “sounding board” in regard to such elements as light fixtures. “We were another set of eyes for her,” he says. “She knew what she liked. She had a clear vision and just needed the right people around her to bring it to reality.” •