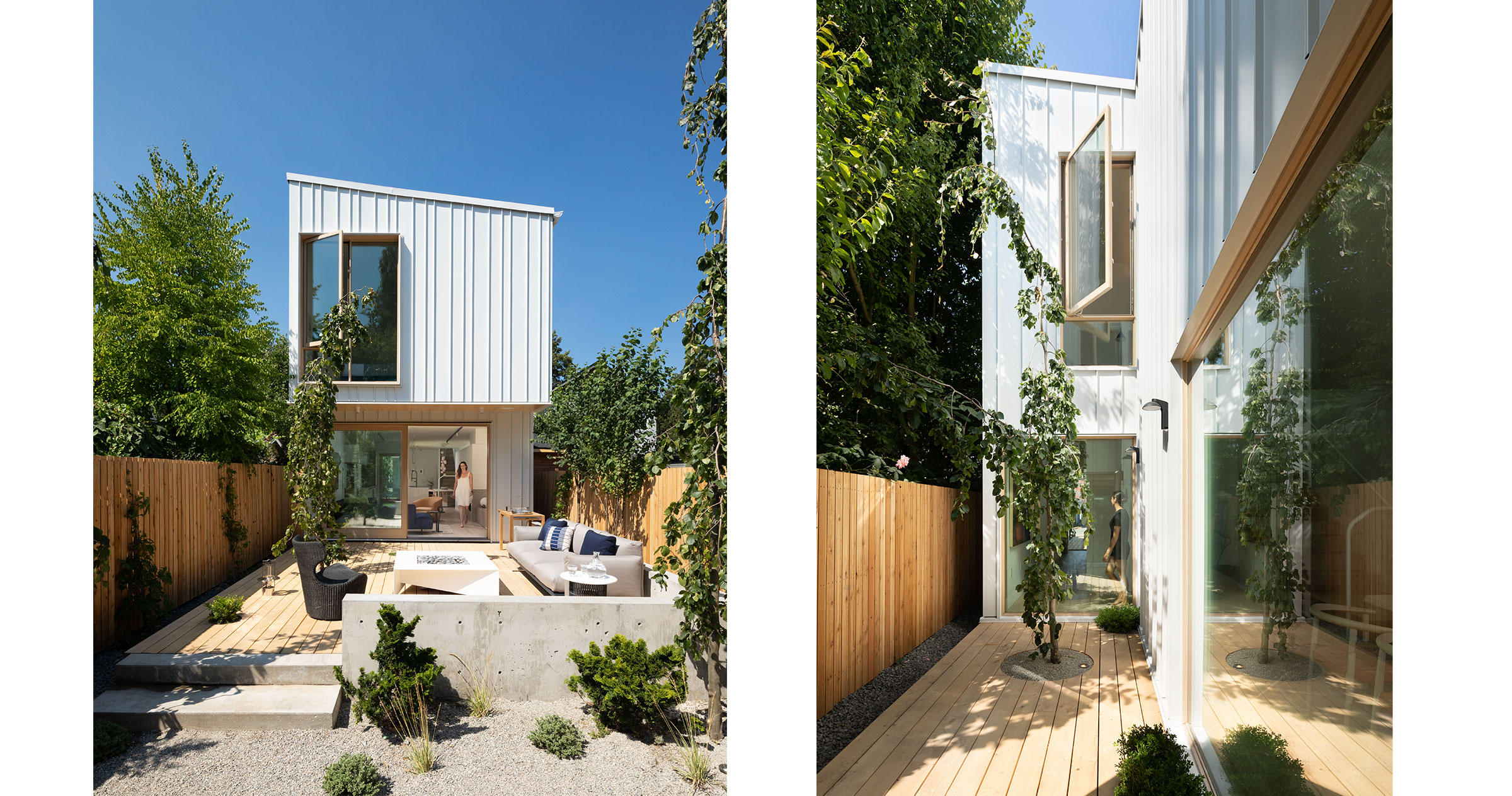 The average house built on spec is typically designed to appeal to a broad range of tastes. This home in Vancouver’s South Main district, however, is anything but average.

Built to wow potential buyers with its design, it’s a functional home that offers unique architecture and finishes.

To begin with, it’s on an unusually shaped lot, 20 feet wide and 200 feet long. Each side of the lot runs along the backyards of five properties; at the end of the lot is another property’s backyard. It required an imaginative approach for designing a building that said “home,” not “bowling alley.”

The lot’s unusual challenges appealed to Kenton and Jayme Lepp, who own Lepp Construction, a boutique home-construction, renovation and project management practice. “We were looking for something not typical,” Kenton Lepp says of acquiring the lot in 2015. “We knew there was a market in Vancouver for people looking for a turnkey higher-end home. We wanted to apply our experience and add value through design on this long, narrow property.”

To meet the challenge of the lot, they turned to architect Randy Bens. “Randy was phenomenal,” says Lepp. “He was immediately passionate about the lot design and size. He came up with the exterior shape and interior flow of the house while navigating through the city’s requirements.” For instance, proximity to neighbours on each side meant restrictions on placement of windows to meet Vancouver’s setback rules. Bens designed a small side courtyard that allows large amounts of light into the house while keeping the windows and door the required distance from the lot boundary.

“Randy created the courtyard and back patio space in a way that made it an extension of the interior space, making it seem larger, and allowing an easy connection in warmer months between the interior and exterior through the use of a large lift-and-slide, full-height glass door,” Lepp says.

The lot’s dimensions demanded ingenuity and diplomacy from Lepp and team during all phases, and especially during construction. “There was a surprising amount of management with 11 neighbours involved,” Lepp says. They made fence agreements with all the homeowners of adjoining properties, some of whom were quite demanding. “Being adjacent to that many people is unpredictable, and they had to deal with [annoyances such as] noise, sawdust, parking.”

Once they could move forward, “we had to sequence things precisely,” Lepp says. “With the only access from the 20-foot-wide front of the lot, construction had to start from the back and move forward.” The team left large spaces for windows and doors open as long as possible so they could bring in materials without damaging the building.

Luck was on their side in the timing, because there was a new build happening on one of the many adjacent lots. “We could use their back lot near the end of our lot,” Lepp says. “A lot of pre-planning went into building this house to avoid expenses. It was unique in the nature of the challenges.”

In all, the construction took 16 months. The result of this is a house of 2,200 square feet made for family living. It comprises a foyer, kitchen, dining area, family room and powder room on the main floor. Upstairs are a master bedroom with ensuite bathroom, two children’s bedrooms served by a full bath and a half bath, a den on the upstairs landing and a study area for the children. There’s a tidy little courtyard tucked into one side, and a deck outside the family room that leads onto a grassy little backyard with an accessory building that could serve as, say, a workspace, studio or playroom. “By designing the studio building, architect Randy Bens added another 100 square feet of space in a quiet and calm area of the block, where there is no alley or traffic,” Lepp says.

“In this home, we played around a lot with space planning,” he adds. “The interiors were a huge focus.” Based on happy experience on previous projects with Chad Falkenberg and Kelly Reynolds, of Falken Reynolds Interiors, Lepp engaged them early in the process to design the interior, which is in an envelope only 16 feet wide from one exterior side wall to the other.

“We got involved when the plans were being drawn up,” says Falkenberg. “We massaged the floor plans to make spaces feel even bigger than they were.” A masterstroke was to use circulation space as “rooms,” so although the building is long and relatively narrow, it doesn’t feel so because there are relatively few walls and doors. Falkenberg used the same white oak flooring throughout to emphasize the continuity of spaces.

An abundance of light also contributes to making the house feel open. A total of 11 skylights brings in natural light, as do large windows in spaces such as the dining area; there the wide window goes right down to the floor and looks out onto the courtyard, so this narrowest part of the house feels open.

Upstairs, Falkenberg provided several places for people to move around. “We decided that, instead of larger bedrooms, we’d have the desk and work zone outside bedrooms,” he says. “A lot of clients don’t want young kids tucked away in their rooms. The study space is accessible for parenting. The den on the upstairs landing is cozy enough to feel like a separate space without being cramped.”

In the Modern tradition, the house has unadorned finishes. It was designed and constructed meticulously, to tight tolerances. Falkenberg specified “materials that could get banged up a little bit.” This was evidenced by how well the house showed during open viewings, part a recent IDS Vancouver tour, when about 500 people trooped through it.

Falkenberg is particularly proud of the stairwell leading to the second floor, enclosed by a file of powder-coated metal slats. Practical, yes, but also stunning architectural sculpture. “The rail lets the light in, but it’s tough,” he says. He’s delighted with how his design was executed, not just here but throughout the house.

Lepp is similarly enthusiastic about the venture. “We have no regrets,” he says of his company’s work on this unique house. “This was a great project for us as young developers.” •