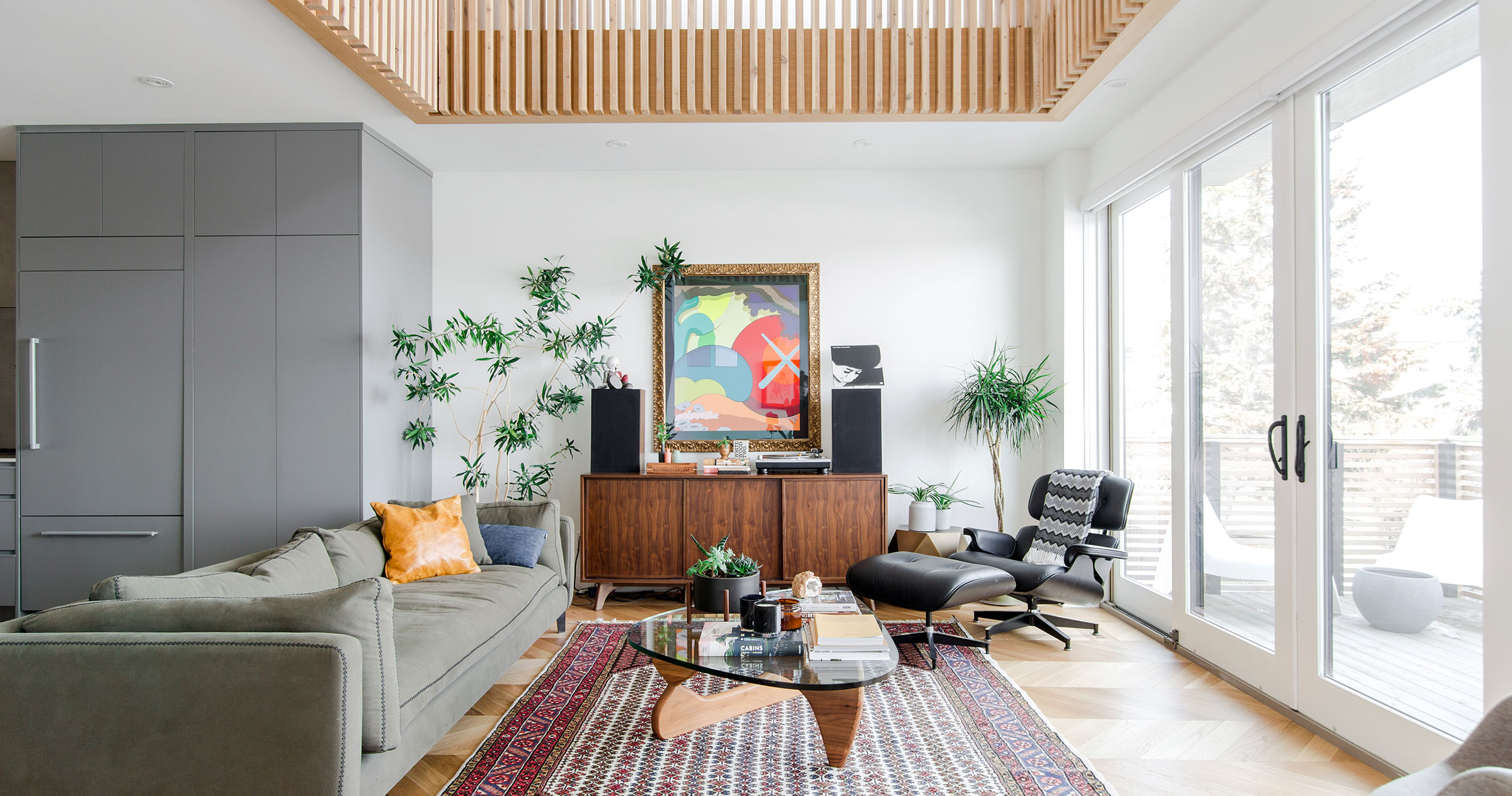 The best ideas for designing indoor spaces sometimes come from time spent out- doors. For Majida Devani, the creative lead at Rndsqr home builders in Calgary, that spark came on a family holiday to Japan, visiting the bamboo forests near Kyoto.

As she was planning the build that was to become her own family’s new home, Majida wanted to try something new, to create a bright and inviting opening, like in a bamboo forest, from the second floor to the first. She surrounded that opening with a railing of long, narrow, tightly spaced slats, topped with metal. “We did it in cedar, instead of bamboo,” she says, “and we get the light dancing through the main floor.”

Rndsqr, an award-winning building and development company owned and run by Devani’s husband and his brother, Alkarim and Afshin Devani, specializes in inner city, multi-family projects. “One of the things we always like to do is experiment,” says Majida, “To try new things and make sure they work out in our own homes first, before we do it anywhere else.”

That opening was just one of the new things they tried in the Bridgeland semi-detached home where the Devanis live with their eight-year-old daughter and one-year-old baby.

Family and friends visit often, and so Majida put a lot of planning into the kitchen design. She wanted to use concrete to create the island – but only if it could be crafted as a single piece without seams. “When we have an idea, we say, ‘Can you make this work?’ ” The concrete company she works with, 2Stone Designer Concrete, at first tried to persuade her to go with two pieces, but she persuaded them to try. The first model failed – it split in the middle; the second worked perfectly. “We had to crane the whole thing into the house through the patio doors and then build the kitchen around that,” she says. The island has two tiers: the concrete countertop and a second wooden tier at table height, which is the family’s main eating area.

Lighting the area over the island was also a consideration. “We thought it would be nice if we could dangle garden lights, but wondered how could we do this and not make it look messy,” Majida says. In the end, they created a fixture using a large board, cut out circles to add rows of diamond LED lights, and worked with their electrician to set it up. “If we don’t know how to do something, we have someone who will know how to put it together or work out the technical part,” she says.

But the “new thing” that Majida’s family, especially her older daughter, has the most fun with, is a play net on the second floor that hangs right over the home’s front hall. That second floor is pretty much given over to her children – her daughters’ bedrooms and bathroom are there, along with a large play area at the front of the house, surrounding that cedar railing. Beside the railing, hangs a hammock-like net, made by Cirque du Soleil, held firmly in place with metal beams. “I think it’s over-engineered,” Majida says, “But it’s super-safe.” When visitors come in the front door, they can often see her daughter’s silhouette above them as she lies there to read.

Another family holiday, this time to Chile’s Atacama Desert, also influenced the home’s design. One of the hotels the family stayed at was designed with a lot of earth tones, Majida says. Since many of the older homes in her new neighbourhood are built with red brick, those tones seemed to fit in with the new house. To mimic those colours, but without using the brick, she chose Corten, the weathering steel that turns reddish as it oxidizes. A second-storey bump-out at the front of the house is clad in the steel, and it’s used again inside the house as a fireplace surround.

To create warmth, she used textures, art and wood. The floors are white oak, laid in a chevron pattern. Wall niches are clad in wood. And solid wood railings, also in white oak but stained dark, zigzag up, down and across the stairways from the basement up to the master retreat on the third floor.

Majida added a lot of wood in the master bathroom, too. A wall of wooden slats hides the water closet, and green tiles with a geometric pattern line the walls. The colour choice was influenced by the park beside their home, Majida says. She originally planned to use them on the floor, but fearing they weren’t strong enough, decided they’d be perfect on the walls.

“We like textures, earthy colours, warm aesthetics. People say, ‘Oh, you have a modern house.’ When I hear that I think it feels a little cold,” she says. “So maybe we’d call it transitional.” •

Going With the Flow

Photography: Larry ArnalStyling: Loren Smarda One of the joys of a custom-built home is that its owner can configure it...

The right lighting in kitchens and bathrooms can boost comfort and beauty considerably. But with such a vast array of...

Photography: Ricardo TeixeiraStyling: Erika Dela Cruz The contrast of crisp white surfaces against natural copper and wood was the key...

Photography: Drew HadleyStyling: Jean Monet Looking for the right house can be a bit like dating. We know when there’s...

Photography: Luisa G. González BEFOREBEFORE Canadians who move into condominiums find themselves with the daunting yet exciting task of designing...

Welcome to our Home