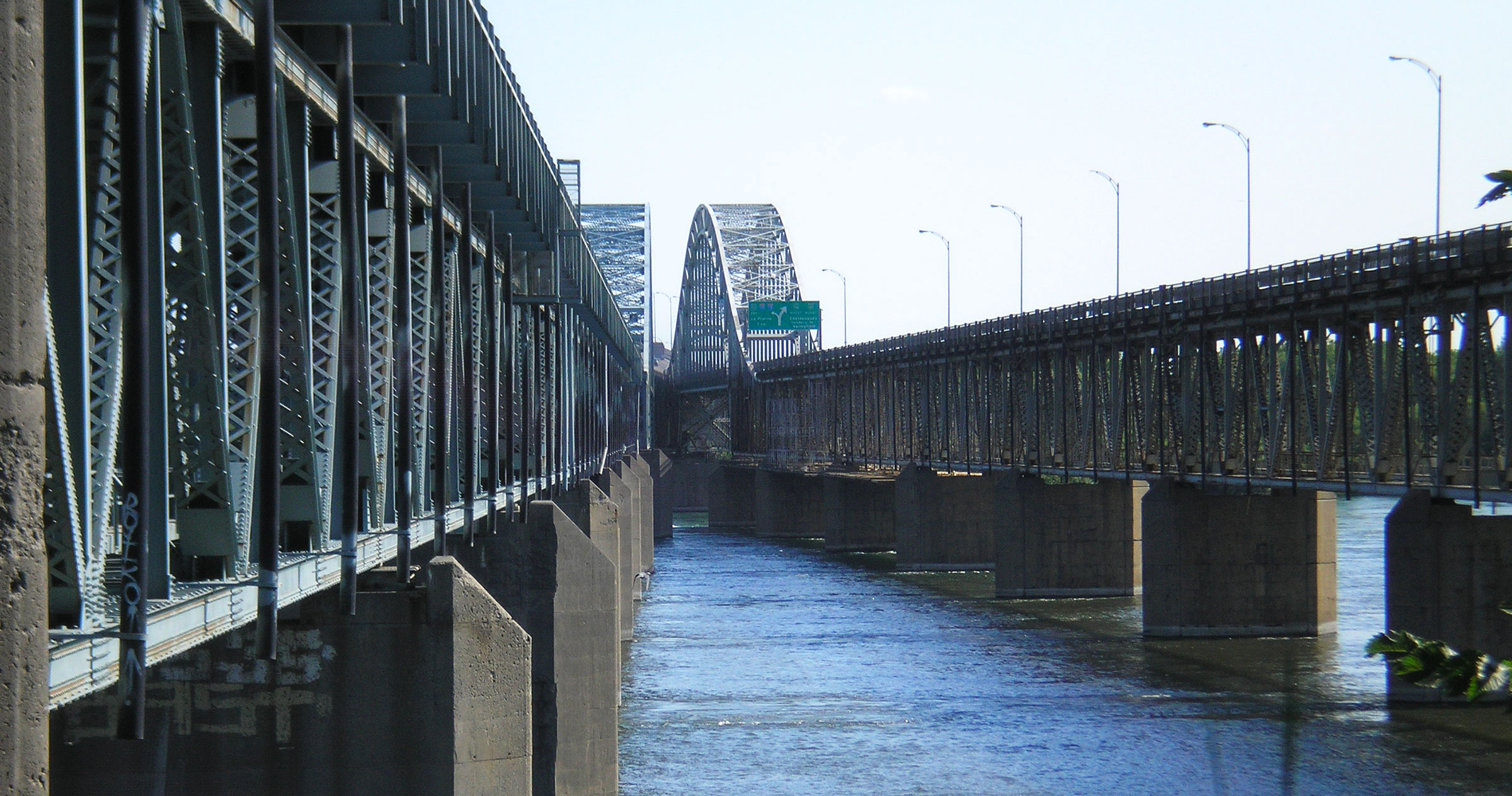 A link between Montreal’s past and indigenous culture

The Honoré Mercier Bridge, more usually called the Mercier Bridge by locals, was the fourth bridge built to span the St. Lawrence River. It also links Montreal’s history to that of the Mohawk reserve of Kahnawake through which it runs.

The bridge connects the borough of LaSalle with the reserve and the suburb of Chateauguay located on the other side. An estimated 75,000 vehicles use the bridge each day on average, making for some 30 million a year.

When it opened in 1934, it was named for Quebec Premier Honoré Mercier. It was originally 1.3 kilometres long with a large steel arch in the middle, surrounded by 11 steel spans and 31 reinforced concrete spans.

Today, the bridge has those viewing from afar seeing double. As far back as 1963, the Mercier Bridge’s two lanes proved insufficient to handle increasing traffic. The Quebec Transport Ministry commissioned a second bridge to be built adjacent to the first, doubling the number of lanes available to motorists.

It carries provincial highway 138, formerly Route 4. Motorists heading for the Eastern Townships and the U.S. border find the Mercier Bridge the most direct route.  Or they would, if not for the seemingly endless closings in place for the past several years to make much-needed improvements to the ageing structure.

In 2009, an eight-year project to replace the bridge’s deck got underway. With lead contractor Mohawk Bridge Consortium, work was completed in August 2016. The Mercier Bridge’s overall management is handled jointly by the provincial government and Jacques Cartier and Champlain Bridges Incorporated. According to the latter’s website, “(the project) serves as an example for collaboration with the Mohawk Council of Kahnawake and the expertise of Mohawk contractors.”

The bridge was closed entirely during the summer of 1990 during the Oka Crisis, a 78-day standoff between Mohawk protesters, police, and army. At issue was a proposed golf course expansion and condo project to be built on disputed land. In solidarity, Mohawks in Kahnawake shut down the Mercier Bridge and some threatened to blow it up. The bridge did not reopen until the end of August.

The venerable bridge has required even more maintenance over the past few years. And this has led to it being partially closed to traffic for prolonged periods each summer, a pattern expected to continue in 2020. Plans are in the works that would see the provincial part of the bridge rebuilt in coming years to include a bicycle and pedestrian path and other modern updates. •