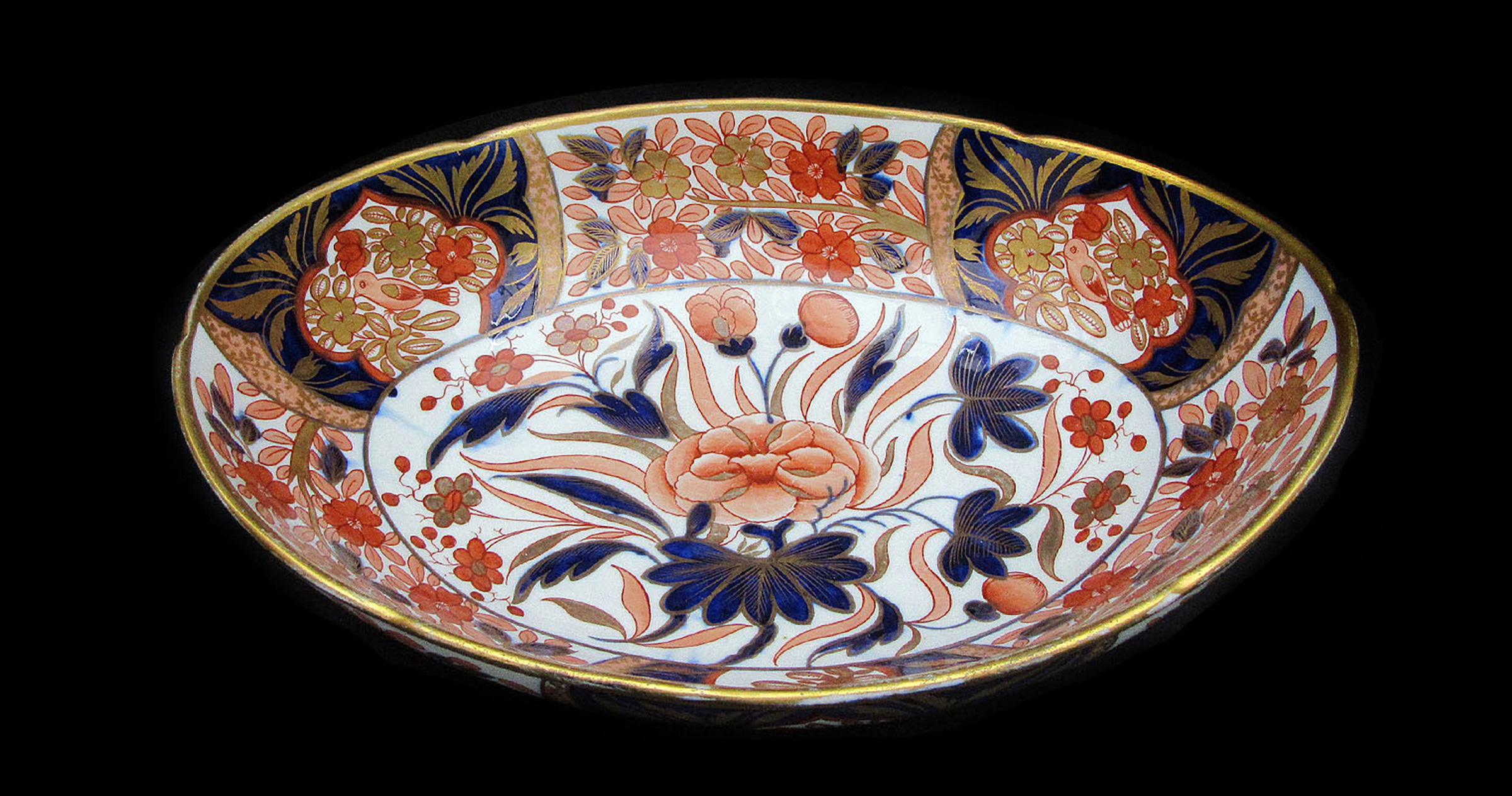 Imari. Is it the name of a port in Japan? Ceramics from Japan, China, Europe, England? A generic term for red, blue and gold porcelain? A plate, vase, bowl?

In fact, all of those answers are correct. “Imari ware” is the term bestowed on a brightly coloured form of Japanese porcelain that was exported to Europe beginning in the 17th century.

After years of producing underglaze blue and white ceramics, Japan made its mark in the ceramic world when it began shipping porcelain from the Port of Imari; hence, the name given to a kind of hand-painted blue and white china with red added over the glaze. Imari’s design quickly became fashionable. Japanese Imari had its signature styles, including the chrysanthemum, and the vase with a bursting flower motif at its centre.

The Japanese added red paint over the underglaze blue in a technique called “clobbering.” The Chinese were quick to copy the “clobbered” style and created their own version of Imari.

The Europeans followed. The Meissen factory in Germany began producing porcelain in the early 18th century; it was harder, stronger and lighter in weight than its Chinese and Japanese counterparts. France was next. In fact, the French and German factories were subsidized by those countries’ royal families; the funding permitted ceramicists to experiment and create elaborate, original wares with crests, armorials and gold highlights.

By 1770, the English were also making porcelain. There is a story that the English improved the quality of porcelain when wig powder accidentally fell into some clay, adding kaolin to the mix. The English copied the Chinese blue-and-white designs, the Blue Willow pattern being the most popular. Many other Chinese designs were copied and became known as “Chinoiserie.” The English soon added red, and so began their version of Imari ware.

They began by making small wares, such as tea sets, to fit into their small kilns. The English factories were not government-subsidized and had to make a profit to survive. By 1800, many factories had opened across the country, including—by 1820—Derby, Coalport, Spode, Wedgwood and Masons. By then, Imari decoration was being sought after by the masses, who had begun buying dessert and dinner services to enhance their daily lives. Production soared and factories became profitable.

Imari colours and designs remain popular. Even in contemporary decor, the addition of some Imari porcelain for display adds warmth, colour and a sense of history to a dining space or living room.

How can buyers of Imari ware determine the provenance of their pieces? One way is to handle it. How heavy is it? Chinese and Japanese pieces are heavier and have a greyer porcelain body. They’re also opaque compared with more translucent European pieces.

The size of the piece is also a clue: Asian kilns were bigger than European ones, to fire such large pieces as vases and chargers. In contrast, England’s smaller kilns were sized to hold tableware.

If gold is added to a piece, it is likely to be thicker and heavier on the French and German pieces than on the English wares.

In contrast to its European counterpart, which has a whiter background, Japanese Imari features designs that cover the overall surface of a piece. Also, on Japanese and Chinese wares, the borders are decorated with repeating designs.

Check to see if the piece is hand-painted or transfer-printed. Hand-painting is executed by a brush to produce a smooth line in a pattern. Transfer-printing was done with a tool that sculpted patterns on copper plates and transferred them to the items for mass production.

Another question about Imari ware is its age. To determine a piece’s vintage, turn it over and inspect it for telltale signs: a mark or addition such as blue circles or flower stems. Next, consider the size. Reproductions are often larger than originals. Check for wear that would be commensurate with age. Finally check for repairs and observe the piece’s general condition.

I fell in love with Imari ware when I was a university student. While studying fine arts at McGill University, I spent a lot of time at The China Shop on Mackay Street in Montreal, where Betty Ramsey gave courses on porcelain. I loved simple patterns, such as the motif of a single sprig on a plate. I proudly bought my mother an early-19th-century English plate as a birthday gift. She told me: “When you get a little older, dear, you will like a little more colour.”

She was right. Years later, I understood. Imari decoration had become my favourite. •